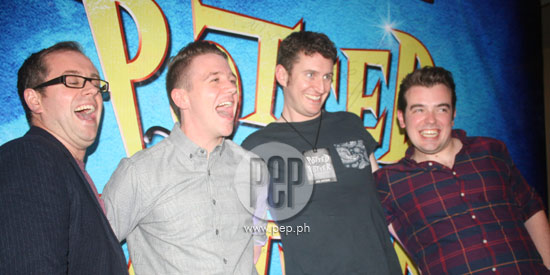 (From left) Jeff Turner, Benjamin Stratton, Dan Clarkson and James Percy graced the opening night of the third Manila run of Potted Potter. This two-man comedy show is being staged at RCBC Plaza, Makati City until October 5 as part of their Australasia tour.

Potted Potter - The Unauthorized Harry Experience, A Parody by Dan and Jeff returns to Manila, bringing with them the magic and nostalgia that only Hogwarts can provide.


This 2014, a new duo is set to charm and bewitch all the Filipino Pottedheads with their wit and funny antics. James Percy plays Harry Potter while Benjamin Stratton plays everyone else.


Potted Potter follows the two-man comedy format that they have maintained since the show first premiered in 2006 at the Edinburgh Festival in Scotland.

This will be the show's third opening in Manila, something unprecedented due to the fact that the Philippines is the only country (aside from the U.K.) that the show has premiered in three times.


"We've heard great things about Manila from Gary and Jesse [Potted Potter actors in 2013] from their last time here... I'm just excited to be here and see if it lives up to these great expectations, I'm sure it will," says James.

KEEPING THINGS FRESH. The creators would cast new actors every now and then to keep things interesting since every performer adds a new dimension to the comedy show.


James explains: "The show changes so much with who's performing. Dan and Jeff wrote, created and performed the show for so long. Last time it was in here in Manila, two actors Gary and Jesse were doing the show but then that was again completely different to Dan and Jeff and now me and Ben are doing the show. If you watch the show side by side they would be completely different because of what each actor brings to the show."

Moreover, they also reference anything new from the Harry Potter world such as when J.K. Rowling revealed that Dumbledore was gay. "If there's anything new in the world of Harry Potter we'd have to reference it, we'd be stupid not to... It keeps the show feeling fresh like when Pottermore came out or when the studio tours in the U.K. began," Jeff pointed out.

They also make it a point to interview people a few days before the show so they can update their repertoire with cleverly interjected references to Pinoy culture.

"What we'll do in the first couple of days is we would talk to the concierge at the hotel, talk to taxi drivers, talk to anyone who's working with us who's local and ask them what's going on at the moment in town or in the country... That always gets a cheer because people love it when they get local references," reveals Jeff.

Easily one of the highlighs of the show is the Quidditch match, something unique to the Potted Potter experience as audiences have the chance to participate.


A visual spectacle which, according to Jeff, has gotten great feedback from the audience and has been a crowd-pleaser since day one.


"The best thing about that [Quidditch] is that it's different every single day, we never know quite what's going to happen... that's the most improvisational part of the show," says Jeff.

Another treat for theatergoers would be the fire breathing dragon which, according to Jeff, is one of the more important characters and will be referenced a lot throughout the show. "It's really spectacular... there's one thing about when he comes out that always gets a laugh, it's one of the first jokes we wrote.."

Being avid Harry Potter fans themselves, what spell would they want to conjure if they had magic in them?

"When we're on tour like this, the spell I want to do is if I could somehow put three extra hours in the night so I could get some sleep that's what I would use--Sleepus Extendus!" Jeff quipped.

"Ben [the actor who plays all the other characters aside from Harry] who is funnily enough asleep right now is not a morning person at all, he's completely grumpy in the morning and needs a lot of coffee to get up so my spell would just be to somehow cheer him up... I came up with the name Ben Cheeryuplliarmus," says his co-star James.

Potted Potter promises to give a unique experience of going through all seven books of Harry Potter all condensed in 70 hilarious minutes.


All shows will be at the Carlos P. Romulo Auditorium at the RCBC Plaza, Makati City until October 5 as part of their Australasia tour.

The dynamic duo of Dan and Jeff have just finished working on a new project to add to their growing number of parodies--Potted Sherlock--which they also presented at the Edinburgh Festival this year.


Whether Filipinos will get the chance to see this parody of Sherlock Holmes, we'll just have to wait and see.