Life is chaotic and fun in "Avenue Q" 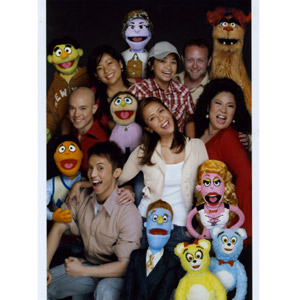 Expect a healthy mix of monsters, Caucasians, Asian Americans, and African-Americans in the neighborhood of Avenue Q.


When Robert Lopez and Jeff Marx's Tony Award winning musical Avenue Q came to Manila last September, it stole hearts as it did on Broadway and West End. Tickets were quickly sold out and almost everyone was talking about it. Fortunately for Filipino theatergoers, Atlantis Productions had the second run of the show from December 14 to 23 at the RCBC Plaza in Makati City, just in time to "give ruv on Christmas day."

Imagine an adult version of Sesame Street where humans and puppets interact. Put together with Rent and South Park, and you get Avenue Q, the story of bright-eyed college graduate Princeton (played by Felix Rivera) as he comes to New York City in search of his purpose in life. His tiny bank account lands him on Avenue Q, a fictional neighborhood set in Alphabet City, where he meets an interesting set of neighbors.

The song "It Sucks to Be Me" introduces us to Princeton's neighbors: Rachel Alejandro plays Kate Monster, the cute kindergarten teaching assistant who loves anything romantic; the unemployed, wannabe comedian Brian (Rycharde Everley) and his therapist fianceé Christmas Eve (Frenchie Dy); Nicky (Joel Trinidad), the happy-go-lucky slacker and his roommate Rod (also played by Felix), an uptight investment banker with an intriguing secret.

Just as the musical advertises itself as "like your life, only funnier," both humans and puppets encounter everyday problems, without sparing the audience from lyrics that are both uncouth and hilarious: Princeton sings about his B.A. in English: "four years of college and plenty of knowledge/ have earned me this useless degree!" but still believes that he can make a difference.

And because there's a healthy mix of monsters, Caucasians, Asian Americans, and African-Americans in the neighborhood, everyone can't help but "be a little racist," even in harmless ways. All these and more are told in a series of catchy songs that get the audience bobbing their heads along and roaring with laughter, or else sharing the sadness in heartbreaking lyrics such as "there's a fine, fine line between love and a waste of time."

Even if these songs are already well known, there's nothing like seeing human and puppet action live under the direction of Bobby Garcia and Chari Arespacochaga. With his wonderful voice and skillful switches from the determined but confused Princeton to the secretly gay Rod, Felix shines as the leading man in this musical, while Rachel Alejandro wins hearts as Kate and successfully seduces others as her other character, Lucy the Slut.

Aiza Seguerra never fails to amuse as she and Joel Trinidad take pleasure in other people's pain in "Schadenfreude." Incidentally, schadenfreude is a German word that means happiness at the misfortune of others. If you've laughed at other people's sufferings then this song is definitely for you.

Perhaps the only problem with Avenue Q is the lack of narrative movement during the songs in Act I. Still, the songs makes the audience laugh the two hours away while they hit where it hurts: how trying to be special is futile, or how it's almost always impossible to relive happier days in a person's life.

And just when life starts getting better for everyone, Avenue Q still reminds us that every happy memory lasts but for a moment in "For Now," with words that are lighthearted yet important, pessimistic yet hopeful. Such a simple piece of advice makes Avenue Q a must-see not just for kids of the iPod age, but for anyone who thinks life just can't get any worse.