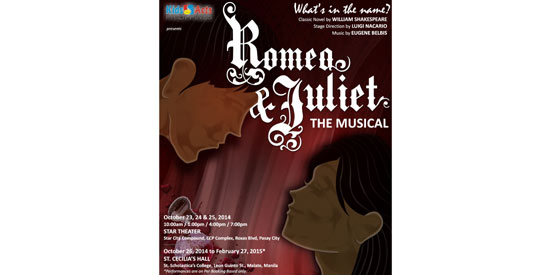 Romeo and Juliet will be staged at Star City on October 24 (Friday) and October 25 (Saturday).

As a season offering to all young adults, Kids Acts Philippines proudly presents Romeo and Juliet edited with additional lyrics by Luigi Nacario and music by Eugene Belbis.

This play will be staged at Star City on October 24 (Friday) and October 25 (Saturday).

This William Shakespeare’s novel will be staged by maintaining the classic requirement of the play from costumes to the set. The music is composed through a fusion of western and eastern with contemporary flavor. “Romeo and Juliet” is simplified without sacrificing the original texts of Shakespeare to let young adults understand and comprehend on how the play is written. In the play, dialogues are sung with full observance of how phrases are being read.

In the town of Verona, there were two rival families, the Montagues and the Capulets, involved in a family feud that goes back years before any of the members were born. One night, the Capulets held a supper at their house inviting friends and relatives of their own. Though a Montague, Romeo attended the party to forget his love for Rosaline.

On that night, he met Juliet and immediately fell in love with her. To his dismay he found out that she was a Capulet. But still, he pursued his feelings towards her, that after the supper he decided to jump inside the Capulet’s yard to express his love for Juliet. In the balcony, they confessed their love for each other and agreed to secretly marry the next day.

Afterwards, Romeo went to Friar Lawrence, told everything about his new love and asked for a blessing of marriage. Friar Lawrence agreed to marry them, thinking it would end the feud between the two families. Unfortunately, the situation became worse. It all started when Mercutio, Romeo’s friend, died in a fight with Tybalt, Juliet’s cousin. Romeo killed Tybalt in an angry rage, which caused him banished from Verona.

On the other hand, the Capulets were planning Juliet’s marriage to County Paris, a kinsman of the Prince. Juliet was not in favor of marrying the man so she asked Friar Lawrence to fake her own death by drinking a sleeping potion that will make everyone believe she was truly dead. The Friar agreed and promised to send word to Romeo to meet Juliet when the potion wears off and to rescue her to Mantua, where Romeo was currently staying and there they will live as couple.

Accidentally, Romeo didn’t receive the message on time. His friend informed him about Juliet’s death, he went right away to her tomb and bid farewell by drinking poison. At that time, Juliet awakened and found her husband with no life beside her. Sadly, she got Romeo’s dagger, stabbed herself and died. The Montagues and Capulets mourned for the two lovers and with their shared sorrow, they, at last, made peace with each other.

Discover what’s in a name that made the houses of Capulets and Montagues’ family feud became a remorseful tragedy?