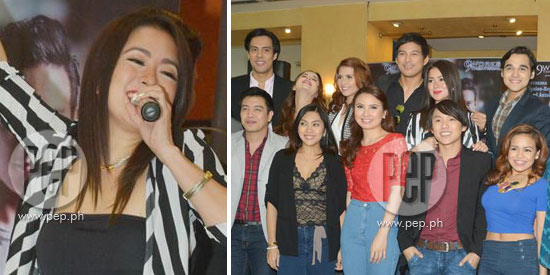 Antoinette Taus (left frame) is one of the new cast members of the musical play Grease. Itwill have a re-run from November 15 to December 7 at the RCBC Plaza, Makati City. For tickets and inquiries, call Tel. No. 586-7105 or 0917-554-5560, or email info@9workstheatrical.com. Interested parties may also purchase tickets via

This just got to be one of the world’s most staged musicals.

Grease, since its original Broadway debut in 1972, has become one of the classic productions that almost guarantee producers of a successful revival and re-run, only if they stick to the core of the material—old-school 1950s rock-and-roll teen life.

For director Robbie Guevara, this is what he particularly embraced for 9 Works Theatrical’s re-run of Grease, which is scheduled from November 15 to December 7 at the RCBC Plaza in Makati City.

“As I look back at the 1995 failed staging of Grease in Broadway, they concentrated on glitz and glamour rather than the raw fun, friends, and family message of the story. If you stick to those 3Fs, it will always succeed,” he said during the press conference of Grease held last October 22 at Amorsolo Square in Rockwell, Makati.

“And without even thinking about that, last year, I concentrated on fun. For this year’s staging, our past two to three weeks of rehearsal has reminded me that it’s fun because of family and friends or because of family with friends. It’s the simple kind of fun. It’s the dancing, the singing, the love of music, which everybody can relate to and relate with. It’s going to be a new show,” Robbie added.

This year’s repeat of Grease gathered a new cast of talent to breathe life into the characters of Rydell High.

When asked about the re-run, Grease executive producer Santi Santamaria explained that 9 Works considered doing a repeat of the show for two reasons.

One was because of requests from people who failed to catch the 2013 staging due to Super Typhoon “Yolanda” and second was after last year’s production won the most outstanding production of existing material for a musical from the PHILSTAGE Gawad Buhay Awards for the Performing Arts.

“Exactly the same day of our opening night, the typhoon struck, and during that time I was wondering if people would watch us, but there was a good turnout. And Grease went on to have a successful run last year, but a lot of our usual audience still missed the show. Then the award came. So we thought it’s [repeat] probably worth considering. Let’s run it again,” explained Robbie.

While there were apparent changes in the cast, Santi clarified that it was not intentional.

“It just happened. They have their own personal reasons. Some of them went on to Hong Kong Disneyland. Some of them are expecting a baby, a good reason at that.” The original cast members included Gian Magdangal, Francheska Farr, and Iya Villania, among others.

PRESSURE AND PREPARATIONS. Getting into the swing of the “Summer lovin’" vibes, the new cast is focused on bringing a different kind of energy and “attack” to this year’s show.

Guji Lorenza, for one, does not let the pressure of matching Gian Magdangal’s performance affect him. Magdangal garnered an outstanding male lead performer nomination from the Gawad Buhay Awards for his role as Danny Zuko.

“Gian is a very good friend of mine. I’ve worked with him in West Side Story [by STAGES’ Production in 2008]. I have really big shoes to fill because I know how good Gian is. But I’m trying not to let that faze me. I’m not a dancer. I’m more of a TV actor than I am a theater actor but I’ve done a lot of theater before in the States and here,” Guji said.

“But this is the most challenging I’ve ever done. I try not to think what Gian has done. This is a totally different show. So I hope the audience would see Guji as Danny and not Gian as Danny,” he added.

For her part, Antoinette Taus, who returned to the country early this year, is ecstatic about the entire project.

“It’s a completely different world. I actually started theatre, television, and film work all at the same time. I think I gained better habits when I was doing theater. I think everyone knows that because you have to be more disciplined. Now, I’m super happy to be back on stage. I haven’t done theatre for more than 10 years or more. I’m super proud and excited.”

“And the fact that it's Grease. Siguro if it's any other musical, baka pinagisipan ko pa. Pero with this, I was like, 'What, Grease? Yes!'”

In between rehearsals, Antoinette is also filming a new project for a network that she refused to name at this point.

“Di pa pwede sabihin. But I have a TV project coming out soon. I can’t say anything yet, like which network and who I am working with. But I’m already taping for it. I’m also releasing a single with Viva records, we’re just working on some legalities since the song was written and released in the States so inaayos na lang namin yun and the song will be coming out soon with Viva records. Right now, my plate is full.”

LIKE A FAMILY. As sweet as her character Sandy, Tippy—who won the Golden Empress Breakthrough Performance by an Actress in 2013 for her role in the film, I Do Bidoo Bidoo—is quite vocal about her love for the show and cast members.

She said, “What I love about the Grease cast is that the people are great. We formed a family and no matter how tiring rehearsals get, it’s just exciting to go back the next day because you just really want to see everybody. I love each and everyone in the cast.”

Steven Silva agreed with her when he said, “It’s actually the first time I’m joining 9 Works so it’s really cool because everyone has been very supportive. I get so much inspiration by being around everybody and it’s really fun because there’s a lot of dancing in the show and I’m so happy because I don’t have to go to the gym anymore. But it’s really fun. It’s not a chore to rehearse at all.”

“What you will see this coming November is very different. It’s not going to be the same show. It’s going to be younger, a different kind of energy,” concluded director Robbie.

For tickets and inquiries, call Tel. No. 586-7105 or 0917-554-5560, or email info@9workstheatrical.com. Interested parties may also purchase tickets via Ticketworld Online.