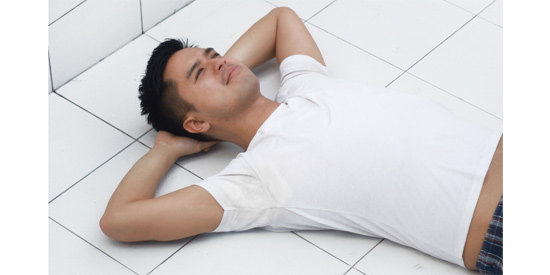 The Sandbox Collective brings back last year’s surprise hit, The Boy in the Bathroom— a refreshingly poignant musical about domestic drama, disease, falling in love with the unexpected and venturing into the unknown.

Could you stay in one place forever? Or live day to day without knowing what’s out there? For David, staying behind closed doors seems to be the only option. Crippled by his obsessive-compulsive disease, a manic mother and his disillusionment with the world and life in general, he isolates himself in the bathroom for a year and vows never to go out. That is, until he meets girl.

The Boy in the Bathroom is a quirky yet refreshingly sophisticated musical that explores that exhilarating feeling of finding the answer to life’s questions, and taking that leap of faith.

It explores the relationship between OCD-inflicted David and his overbearing mother Pam. In a singular moment, everything in David’s life comes to a halt as he locks himself in the bathroom, forging a world of daydreams, toilet paper, and make-believe.

When a girl named Julie enters the equation, however, he finds himself falling in love and wondering whether it’ll be just enough to make him open the door and venture into the unknown.


This Off-Broadway musical has been dubbed by critics as “widely entertaining and yet hauntingly poignant.”

Fresh from its critically acclaimed showing at last year’s Imaginarium Festival, The Boy in the Bathroom returns for a limited rerun this February 2015. The restaging will take place on February 19, 2015 (8:00 pm) and February 21, 2015 (5:30 pm) at the Huseng Batute Theater of the Cultural Center of the Philippines.


The Boy in the Bathroom will be directed by Toff de Venecia, director of the award-winning musical hit, Dani Girl.

Fall in love with the unexpected this February as The Sandbox Collective opens its second season with this heartwarming piece that goes right for the heart and soul.

You may also call Ticketworld at Tel. No. 891-9999 or visit TicketWorld Online.