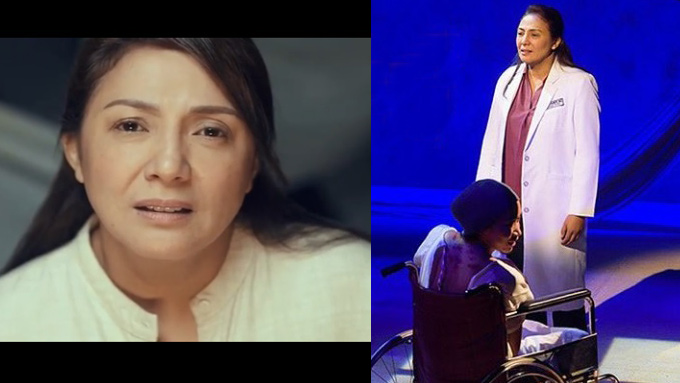 Cherry Pie Picache plays Dra. Gemma Almonte in the HIV awareness play Under My Skin, which is being staged at the PETA Theater Center until March 22, 2020. Under My Skin tells authentic stories of Filipinos living with HIV, each of them facing the reality of dealing with the epidemic. Their stories are woven together by epidemiologist Dr. Almonte, who becomes a beacon of hope and an instument for compassion and understanding in times of darkness.

While the 2019 novel coronavirus (nCoV) is feared to have the capability to cause a global epidemic anytime soon, another virus—the decades-old human immunodeficiency virus (HIV)—remains a public health issue around the world.

Untreated HIV can lead to acquired immunodeficiency syndrome (AIDS), which may then cause the death of patients.

In the Philippines alone, the number of confirmed HIV cases continues to rise at an alarming speed despite the declining trend around the Asia and the Pacific region.

Thus Under My Skin, the advocacy play produced by the Philippine Educational Theater Association (PETA) dealing with the HIV-AIDS issue, is quite relevant to the times.

And what makes this original theater piece even more commendable is its ability to simultaneously educate and entertain.

There are many amusing moments that can elicit a simple smile or a hearty laugh while following a collection of true life stories strung together for the stage by playwright Rody Vera and director Melvin Lee.

As one of the cast members put it during the Q&A that followed the press preview held on February 5, 2020 at the PETA Theater Center in Quezon City: “Bawal kami mag-Maalaala Mo Kaya. Kasi nga drama na, dadramahan mo pa.”

Indeed, the level of drama in how the stories of people living with HIV unfold onstage can match what that ABS-CBN drama anthology is known for giving its TV audiences for years.

But the lightedhearted approach and eventual result lean towards a noontime show, say another Kapamilya program, It’s Showtime or maybe its rival, GMA-7’s Eat Bulaga, or even both.

Under My Skin begins with Dr. Gemma Almonte (Cherry Pie Picache, alternating with Roselyn Perez), an epidemiologist at the Department of Health (DOH), making a study on the spread of HIV in the Philippines.

She discovers that there’s a 90% spike among male homosexuals. or what she calls men who have sex with men (MSM), along with a steady rise in transmission through infected mothers to their children.

Doctor Almonte presents the cases of Dino, Mary Rose, and Jonathan, who have different yet similar stories.

Dino (Dylan Ray Talon) is a gamer who found out he’s HIV positive when he fell ill with tuberculosis, and consequently drives his poor mother Aling Loida (Kitsi Pagaspas) to despair.

To her dismay, Mary Rose (She Maala) has passed on the disease to her young son without knowing that she already got it from her husband Louie (Mico Esquivel).

Then there’s a comedy bar singer (Dudz Terana), who accompanied his best friend to get tested but ended up the one who’s infected.

Through Doctor Almonte’s update on her patients’ treatment, it is revealed that while some may die from the disease, more survive as HIV has now become manageable through medication.

The video component in the production makes it possible for the doctor’s updates to appear visually appealing and easier to digest by flashing pertinent details that are usually in technical or medical terms.

For additional push to the play’s message, a group of borta gays (Erod Enriquez, Jarred Jaicten, and Jason Barcial) share more info on the disease—such as how to avoid contracting and spreading it—while working out.

During the Q&A, Cherry Pie admitted that she faced difficulties in tackling her role in Under My Skin, which is her follow-up to 2017’s stage play Buwan at Baril sa Eb Major and her first-ever full production for PETA.

The movie and TV actress’s struggles showed in some scenes, but like a real pro, she did her best to blend in with the generally fine performance of the ensemble cast that’s made up of theater actors.

“Ang hirap, especially with all the terminologies,” she explained. “Kanina, pwede pang i-improve. But it’s our first run, and I’ll really work at it.”

That’s another thing to watch for in this drama anthology stage production.

Under My Skin runs on weekends from February 7 to March 22, 2020 at the PETA Theater Center located at No. 5 Sunnyside Drive, New Manila, Quezon City.

Friday shows are at 8 p.m. Saturday and Sunday shows are at 3 p.m. and 8 p.m. For tickets, contact PETA (email: petatheater@gmail.com) and Ticketworld (website: www.ticketworld.com.ph and Tel No. phone: 8891-9999).