7 of the greatest love stories in Philippine history 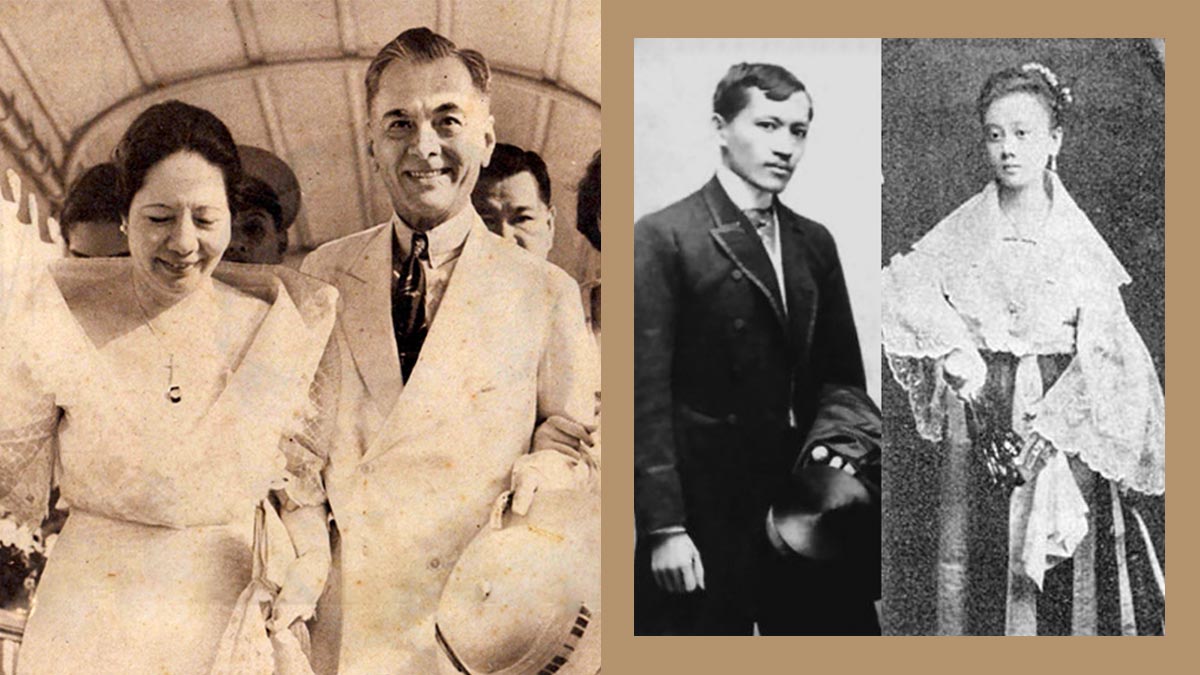 Manuel Quezon and his wife Aurora Aragon (left photo), as well as Jose Rizal and Leonor Rivera (right photo), are some of the historical couples who dared to love in times of political turmoil, war, and violence.
PHOTO/S: Wikimedia Commons 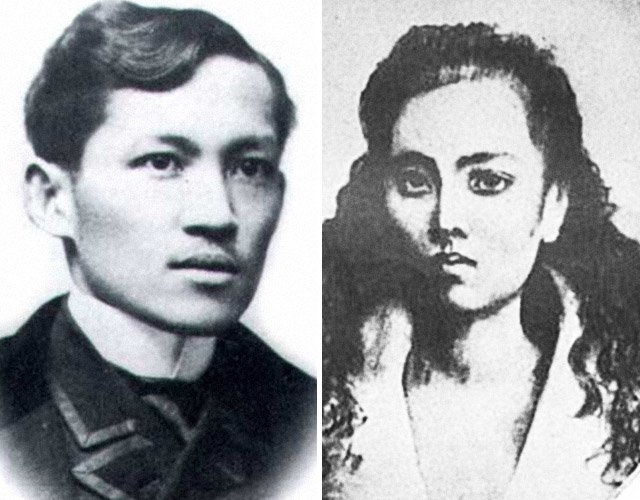 Of all of Jose Rizal's women, Leonor Rivera was perhaps his truest and greatest love.

Rivera, a native of Camiling, Tarlac, belonged to a landed family.

As near-cousins, they first met during Rivera's 13th birthday party.

The two kept in contact through letters even as Rizal traveled around the world.

After Rizal was named a filibustero, Rivera's parents and Rizal's father barred them from meeting.

Thus, Rivera went on to marry an Englishman named Henry Charles Kipping and died on Aug. 28, 1893, after giving birth to their second child.

Before her untimely death, she requested to be buried with the love letters Rizal had sent her. 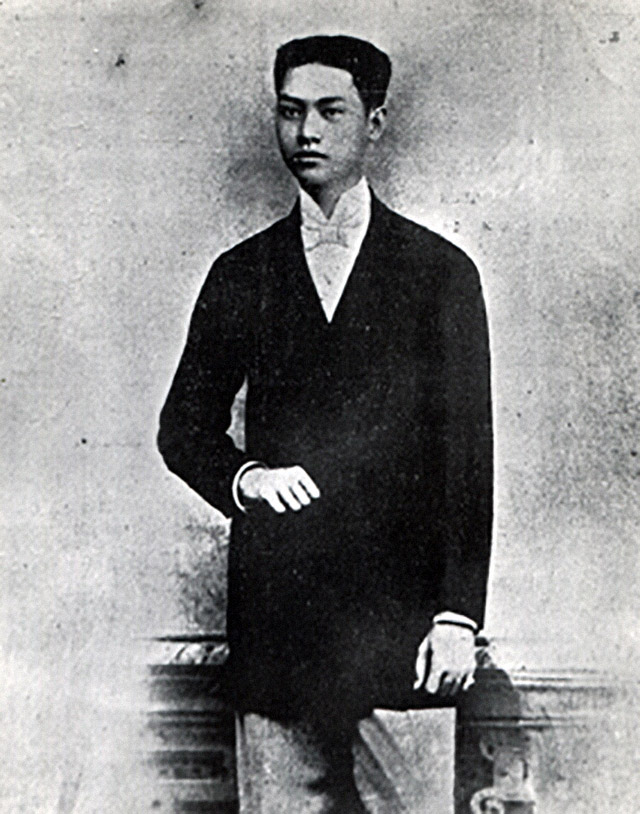 Flaviano Yengko is often remembered as one of the youngest generals during the Philippine Revolution and the "Hero of Salitran."

Originally, however, the unsung hero didn't want to fight in the Revolution.

At that time, Yengko had been finishing his law course, and was courting a young Caviteña who reciprocated his feelings.

The young lady's father, however, preferred another suitor who had already fought in battles.

According to Ambeth Ocampo, to deter his daughter from choosing Yengko, the father would then say, "[He] does not know anything but to dress himself like a woman and is incapable of picking up a gun and fighting like a man for our cause."

He accomplished his duties and fought in a number of battles before his valor was noticed by Aguinaldo himself.

He rose through the ranks and was soon a brigadier general.

During the Battle of Salitiran, he was fatally wounded and brought to the hospital where he was nursed by his sweetheart. 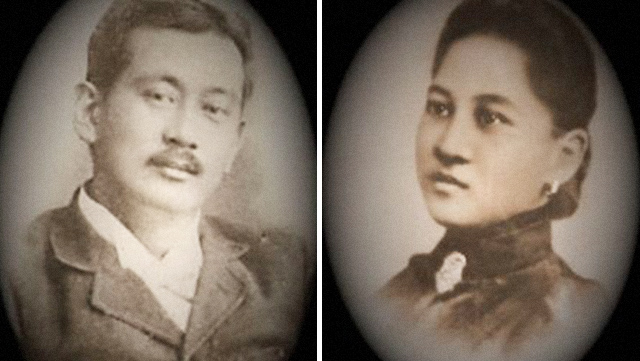 The Ruins, one of Talisay, Negros Occidental's most famous tourist spots, was built as a symbol of love.

Don Mariano Ledesma Lacson, a baron of a 440-hectare plantation, was instantly smitten upon meeting Maria Braga, a Portuguese he met in Hong Kong.

He asked for her hand in marriage, and brought her to Talisay to start a family.

Tragedy struck while they were expecting their 11th child as Braga slipped in the bathroom and died.

To immortalize the love of his life, Lacson built a mansion in front of his ancestral home.

The mansion was inspired by Braga, from the engraved letter M on the entrance to the marble-like concrete similar to Braga's alabaster skin.

Sadly, the mansion was burned for three days to keep the Japanese from using it as their headquarters during the war.

KING NORODOM I AND JOSEFA ROXAS 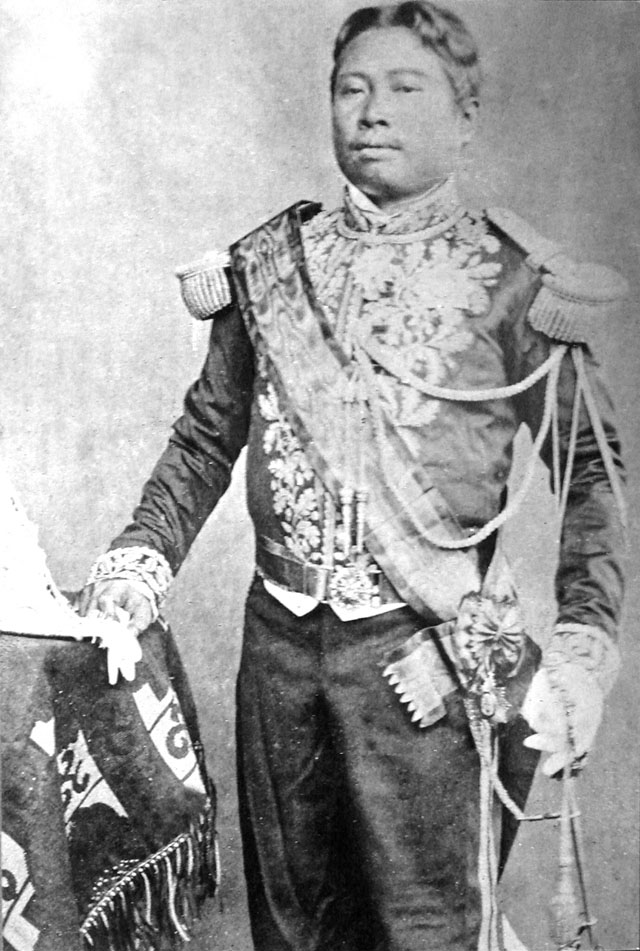 In 1872, Cambodia's King Norodom I made a two-week state visit to Manila.

He was given the typical pleasantries: a 21-gun salute and a dinner hosted by the governor-general.

His itinerary also included a tour around the country in modern-day Tagaytay and Pampanga.

During his visit, the king fell in love with a certain Josefa Roxas y Manio, a member of the prominent Roxas clan.

Ambeth Ocampo writes that the king tried to win over the Bulakeña by offering a gold jewel as big as a mangosteen.

He then proposed to Roxas, but she declined, using religion and her duty to her aging parents as an excuse.

With this, the king made his way back to Cambodia alone, but left the priceless piece of jewelry with Roxas. 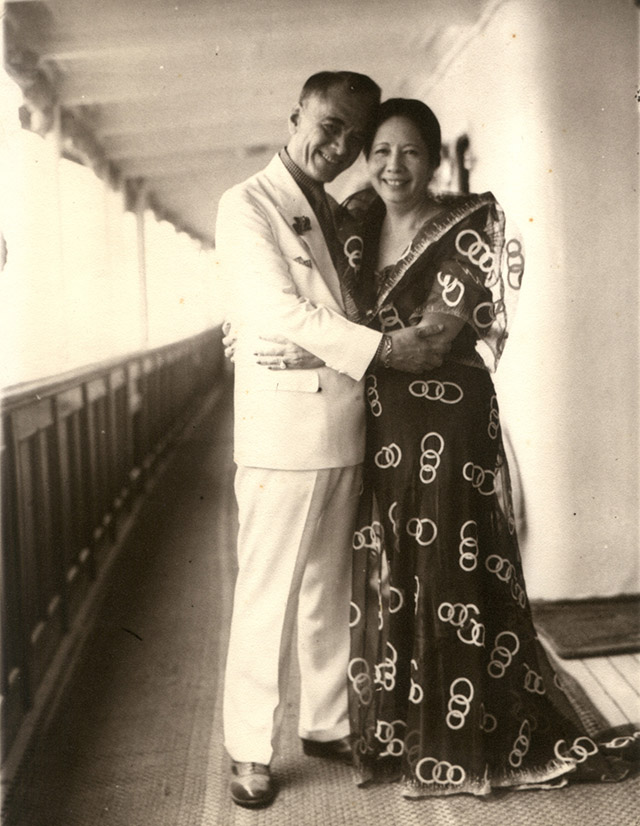 Growing up, Manuel Quezon was a dandy-well-dressed, suave, and a ladies man.

This all changed when he started to notice his cousin Aurora Aragon.

The two engaged in an intense yet playful courtship.

On another occasion, Quezon decided to put Aragon's love to the test.

He paid her a visit while wearing orange blossoms around his neck.

When she noticed and asked why, Quezon replied that he'd just been married.

Aragon immediately burst into tears, realizing how much she loved Quezon.

The two decided to fast track their engagement and soon they eloped in Hong Kong.

The marriage lasted until Quezon's death in 1944.

Five years later, Aragon was assassinated by a group of armed men while on her way to open the Quezon Memorial Hospital.

The two are buried close to each other at the Quezon Memorial Shrine. 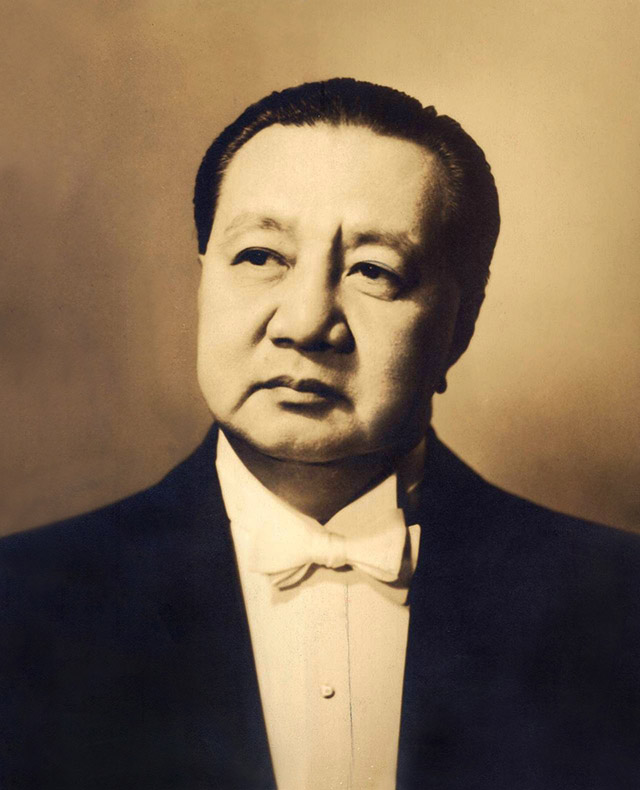 The story goes: One night at a party in Vigan, Ilocos Sur, the lights momentarily went out.

When they came back on, onlookers found 16-year-old Alicia Syquia in the secure embrace of 31-year-old Elpidio Quirino.

In those times, the two had to marry to avoid scandal.

As dowry for the marriage, Syquia's father offered the family home, known today as the Syquia Mansion Museum.

Unlike other couples, Quirino and Syquia only wrote letters to each other after they were married (Quirino worked as a congressman in Manila while Syquia remained in Vigan).

The love letters of the two are displayed in the Syquia Mansion Museum.

In them, Quirino signed "Your faithful and loving husband, who embraces you and kisses you."

Sadly, Syquia and three of her children were killed when caught in a crossfire during the liberation of Manila.

Proving his undying love, Quirino personally dug a grave in Paco Cemetery and carried them there—never speaking about the ordeal again.

In 1933, the Aranetas built their home in Mandaluyong, then a far-flung area. The stately European-style home was named the Victoneta and had 33 rooms, a private chapel, and luxurious interiors. When war broke out, the Japanese confiscated the grand house while the Aranetas retreated to Malabon. To keep their family afloat, the couple sold their belongings, including luxuries such as clothes, shoes, bed linens, and curtains.

Toward the end of the war, the Victoneta was bombed and the couple never looked back.

They instead focused on business and established numerous companies (some remain the biggest today). Later in life, the Aranetas faced another challenge: Martial Law. Since they were already in San Francisco visiting their daughter, the two decided to stay put and manage their businesses from there. The couple passed away in the '80s, within a couple of years of each other.