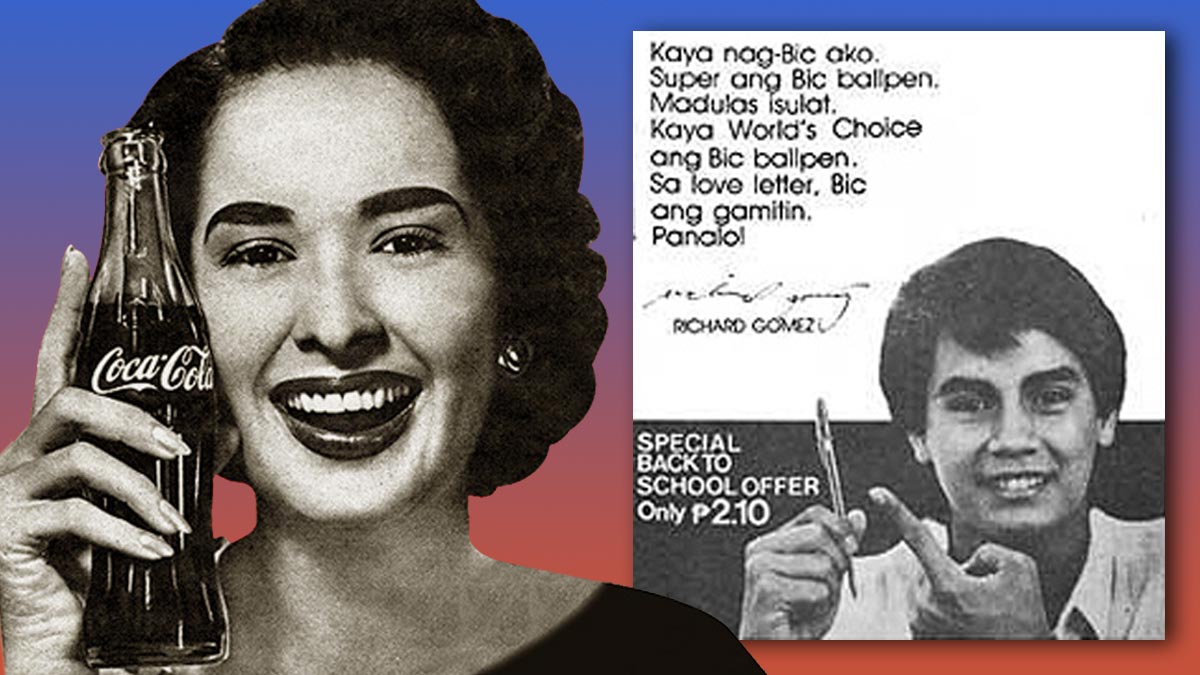 Gloria Romero (left) was one of Coco-Cola's pioneer endorsers in the '50s, while Richard Gomez (right) was a heartthrob featured in ballpen, soda, and clothing ads in the '80s.

Not only do these old advertisements show how much the products cost before and how our veteran actors looked when they were young, it also gives us a glimpse of how people lived in the "good ol' days."

Check out some of these vintage ads and the celebrities, products, and characters who dominated the advertising scene back then. 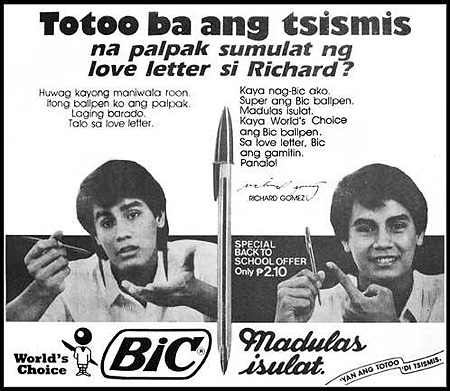 In 1986, Richard Gomez put his seal of approval on this particular ballpen brand—and, yes, it only cost P2.10 back then!

The heartthrob was also featured on some soda ads, but Goma's most unforgettable endorsement gig is probably that for the local clothing brand Bench, in a TV commercial that showed him rowing a boat to the tune of "Clair de Lune." 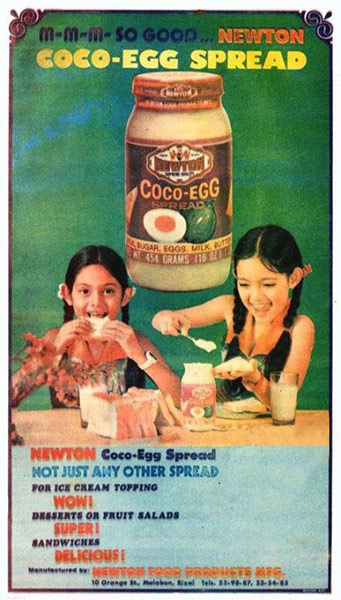 In 1975, Maricel Soriano—the child actress who would later be crowned the Diamond Star—was featured in this print ad for a spread that promised to go perfectly, not just with a sandwich, but with ice cream and fruit salad and other dessert. 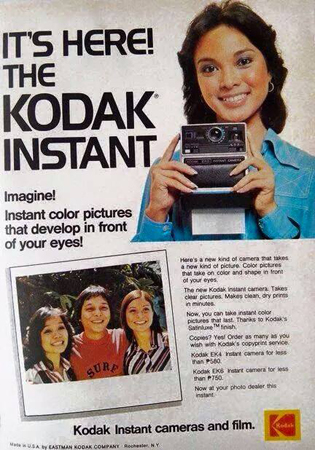 Do you recognize some of the people in this photo? That's Senator Loren Legarda and singer-actor Ronnie Henares in an ad for Kodak.

Before her broadcasting career, the pretty Legarda was an endorser for other big brands like Closeup toothpaste and Pond's. 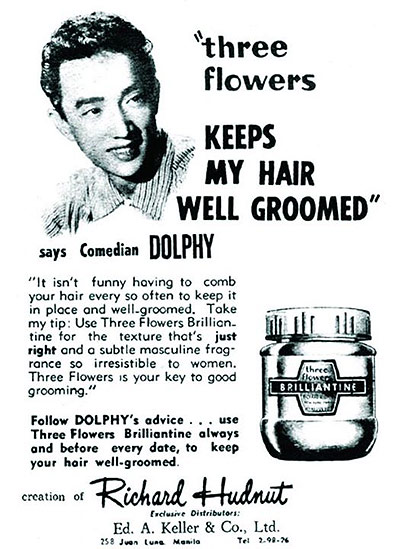 Dolphy, considered a Casanova during his time, endorsed a product that banked on the irresistible charm—of his hair. The ad came out in 1956. 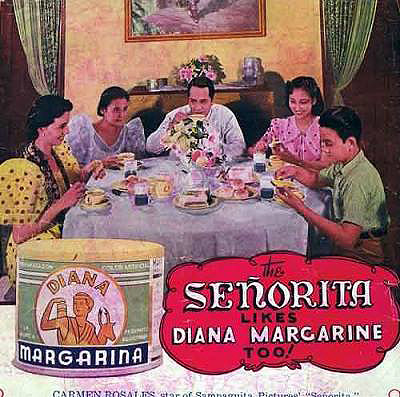 The ad features some famous names of that era—Carmen Rosales, Rosa Aguirre, Narding Anzures, and Fred Montilla as the padre de pamilya.

Rosales is most likely the "Señorita" referred to in the photo, since she had a hit movie of the same name produced by Sampaguita Pictures. 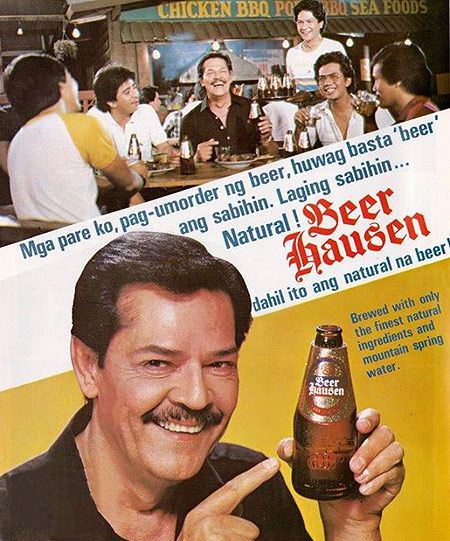 TV-and-movie actor Rod Navarro, who moved from menacing villain roles to comic, slapstick characters, was also known as "the king of commercials."

The Tawag ng Tanghalan host, seen here in a beer advertisement, was perhaps most recognized for his signature mustache and wide grin. 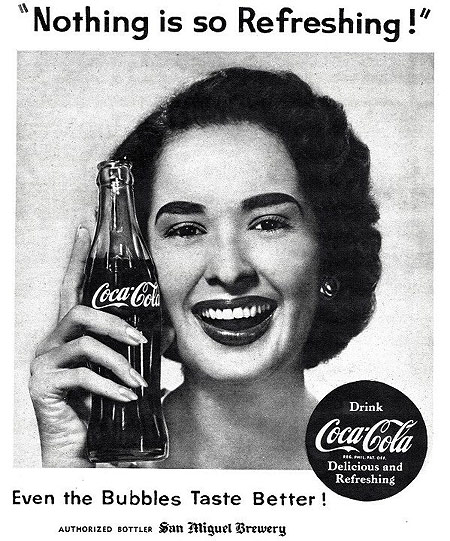 Another fixture of the 1950s, both in film and print advertisements, was the "Queen of Philippine movies" herself, Gloria Romero.

She is considered as one of the pioneer endorsers of the big softdrink brand in the country, and just a few years ago she shared her journey in the brand's TV commercial.

Other famous celebs who have appeared in Coca-Cola's print ads are Amalia Fuentes, Edgar Mortiz, and Richard Gomez. 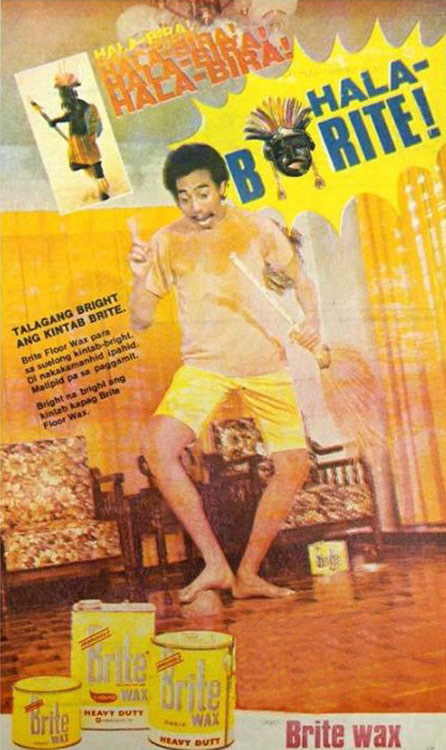 Known for his Pinoy hip-hop and comedy skills, George "Dyords" Javier, also known as the brother of Danny Javier of the APO Hiking Society, polished his parquet flooring with the traditional bunot and Brite Wax. 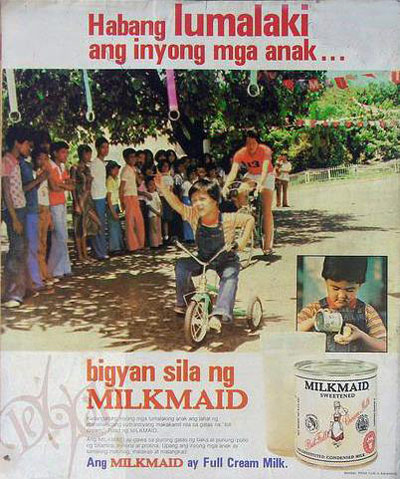 In the 1980s, then child star Niño Muhlach was the brand endorser of this milk brand.

The ad also shows another way of eating it—by pouring the sweetened condensed milk on the Pinoy's breakfast staple, the pan de sal.

Susan Roces and Eddie Gutierrez, one of the hottest love teams of the '60s, are seen here dancing for a brand of cigarettes called Twist.

Susanang Twist was the title of their 1962 movie by Sampaguita Pictures, and the twist was also the current dance craze. 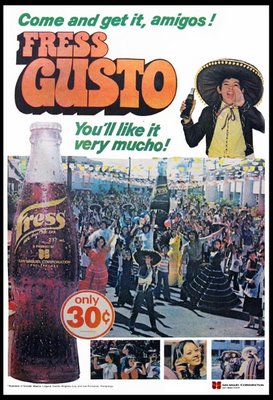 Aside from this print ad from 1978, Mr. Pure Energy Gary Valenciano also appeared in a Fress Gusto television commercial.

He was only 14 years old at the time. 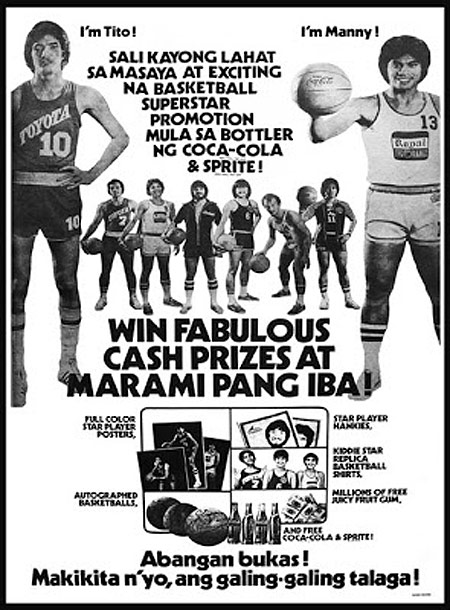 PBA Superstars for Coca-Cola and Sprite

In 1976, Coca-Cola and Sprite teamed up to run a promo for PBA fanatics.

and William "Bogs" Adornado, and Fortunato "Atoy" Co of Crispa.

The brand had the big basketball teams and the biggest hardcourt stars covered all in one ad. 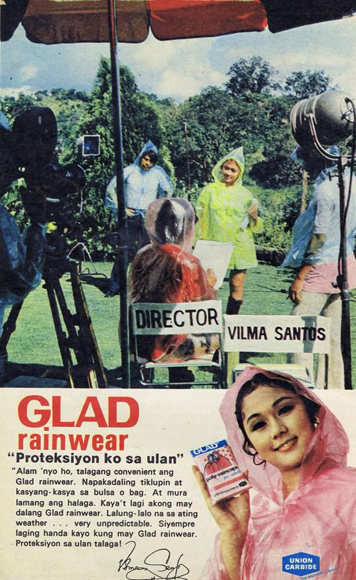 In the '70s, Union Carbide used Vilma Santos as its spokesperson for Glad Rainwear in a print ad.

For its counterpart television commercial, Glad used the song "Raindrops Keep Falling On My Head" for the soundtrack. 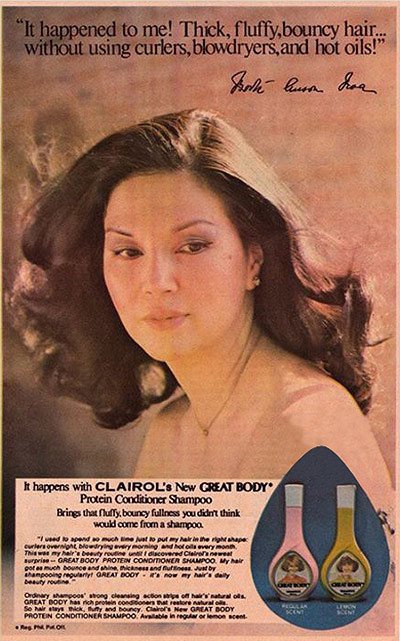 Her long, flowy locks made Boots Anson-Roa the perfect endorser for Clairol Shampoo and Conditioner in the 1980s.

In an earlier decade, the in-demand leading lady was also an endorser for a refrigerator brand with husband Pete Roa. 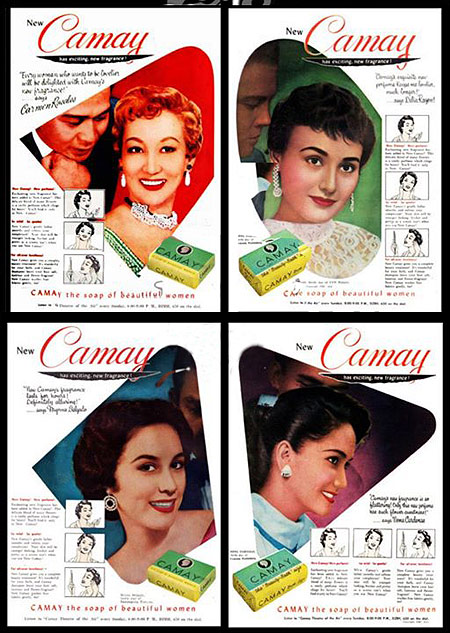 The Camay girls of the '50s were Carmen Rosales, Delia Razon, Myrna Delgado, and Nena Cardenas.

In those days, these lovely women were seen by the public as at par with Hollywood stars. 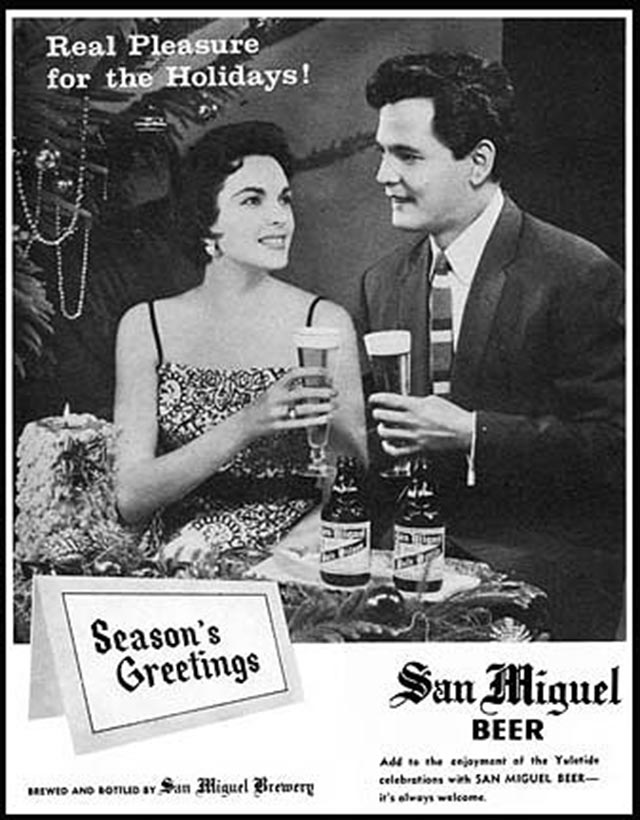 Half-German and half-Filipino Sigrid Sophia Agatha von Giese was considered one of the most beautiful celebrities of the '50s.

When Sampaguita Pictures made von Giese a star, it gave her the name "Paraluman," which translates to "muse." 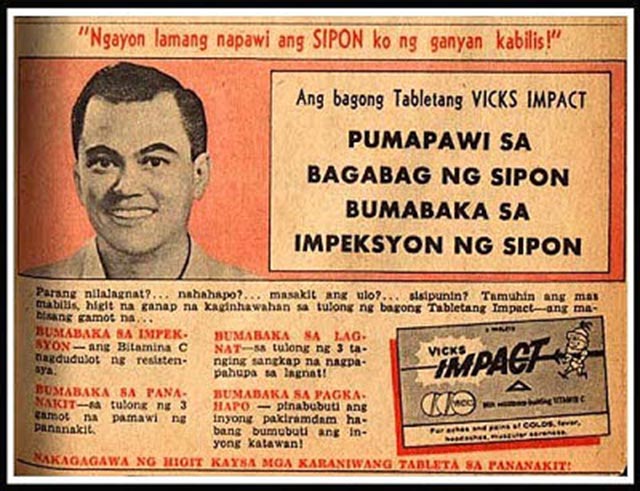 National Artist for Painting Cesar Legaspi was an art director for an advertising agency back in the '50s.

Instead of getting a model for this Vicks ad, he put himself in it—and why not?

He is the father of Celeste Legaspi. 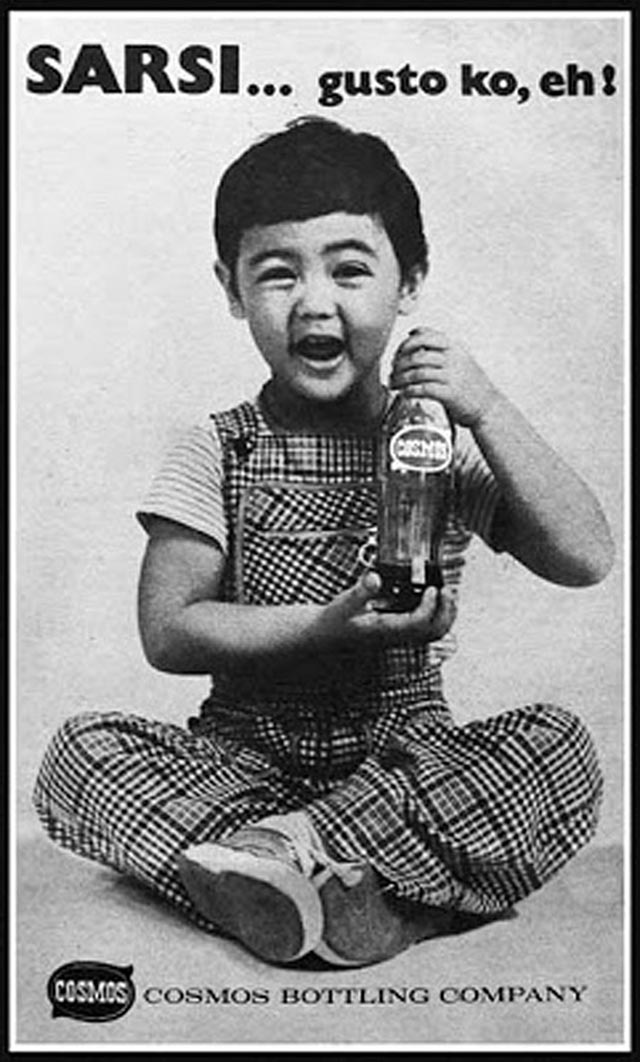 Niño Muhlach was a favorite endorser for many products after he made it big in show business as the Boy Wonder.

Would you believe he was only five years old in 1976 when he posed for this print ad? 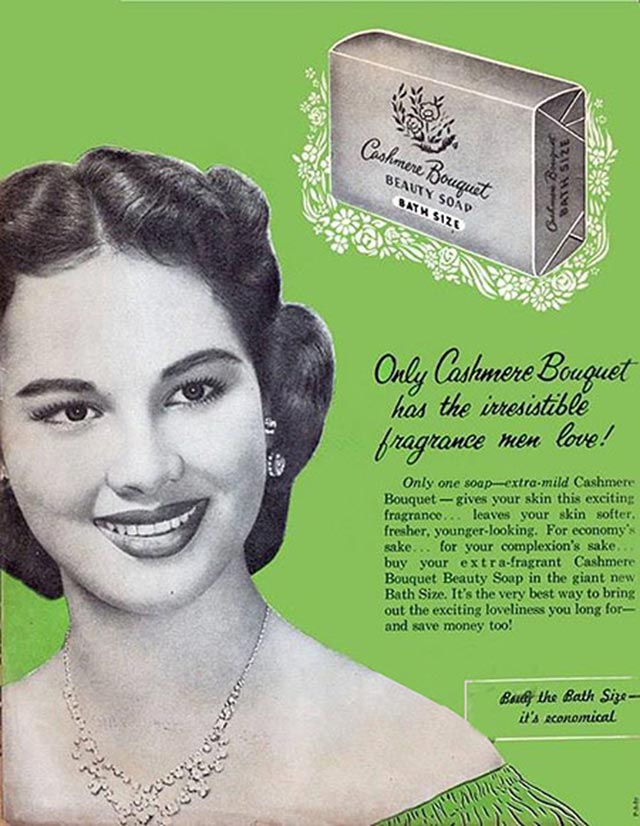 A great beauty, she was often compared to Italian actress Sophia Loren. 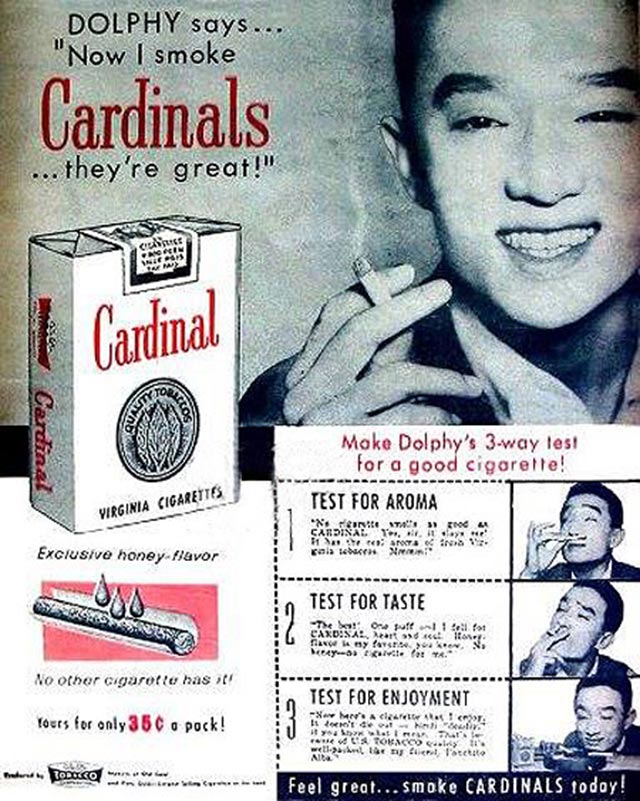 This vintage ad from the '60s features Comedy King Dolphy endorsing a cigarette brand. (Yes, back then the association of medical practitioners did not yet go after celebs encouraging smoking.)

This ad also shows a "test" that the buyer can perform to determine the quality of the cigarette.

And look, it's honey-flavored!

Minor edits have been made by PEP.ph editors.