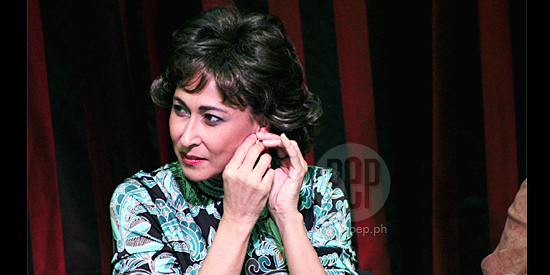 The actress will bring life to Enriquetta Jardeleza-Sofronio, an elite who has â??never worked a day in her lifeâ?? but is on the verge of losing it all.

She elaborates during the January 8 press conference held at the PETA Theater, â??She comes from a wealthy background, and being an only child, she lives in this decadence that sheâ??s been used to.

â??And much as she comes up as an indulgent woman, she married losers, a loser, and falls in love with losers.

â??Sheâ??s very vulnerable. She always wears her heart on her sleeve and at the same time, being that sheâ??s rich, she has already lived that life of decadence.

â??So she has a difficult time shifting into the reality that theyâ??re losing everything.

â??This woman is stressed because sheâ??s running out of money.â??

Cherie Gil was asked why she thinks she often receives offers to bring life to another strong woman role similar to former Vogue editor Diana Vreeland in Full Gallop.

ON USING TAGALOG EXTENSIVELY. Cherie Gil was also asked if she had a hard time adjusting because this is her first play wherein she had to extensively use Tagalog. She pointed out: â??Because sheâ??s [her character] an elite, and also Spanish. Sheâ??s not really expected to have the laymanâ??s punto.â??

She describes the script as â??beautiful. Itâ??s very contemporary language. Itâ??s not something weâ??ll find difficult to understand.

â??Itâ??s not deep Tagalog, just because itâ??s the Chekhov, itâ??s not, itâ??s very contemporary. Rody [Vera, writer] made it easy for me.

â??[It's] just amazingly written. I guess it depicts an essential period in that time, which can still be applied now, which obviously still exists. You know, the higher key, the feudalism, and all that. It still exists in our country.

â??He manages to inject tragedy and comedy at the same time, showing the sides of two different classes, and mocking them in a way that in a way is politically in correct but at the same time funny.â??

However, if there is something she must work on before the show opens on February 20, she puts emphasis on â??memory work.â??

â??[During the four-day rehearsals] they were saying, the first time you understand, the next time, â??whatâ??s this all about,â?? and it was happening today. I was totally rattled, it was so complicated. Itâ??s tedious, it was very wordy.

She also differentiates memorizing for theater and TV, â??Unlike doing soaps, where there is no obligation to memorize, and you memorize small bits.

Still, what makes the whole set-up fun for her is being with so many â??good actors acting on a good script.â??

She explains, â??Itâ??s the first time Iâ??m doing a play with a big cast like this. Itâ??s becoming a really fun ride.

BACK TO TELESERYES. Cherie Gil says that if thereâ??s an offer, she would go back to doing teleseryes.

â??Yeah. Like I said, itâ??s our bread and butter. And so I could do what I love.

â??Not only is it my bread and butter, itâ??s my reach to people who are abroad, TFC, and the masses. And there would always be people I would cater to and be part of their lives."