Beauty and The Beast Broadway musical gets standing ovation in Manila 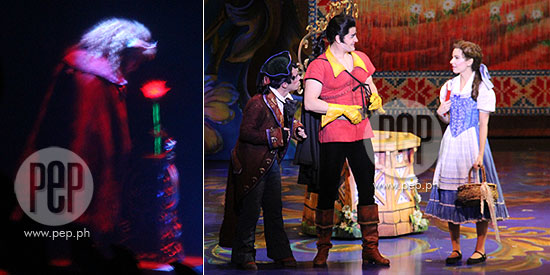 Filipino theatergoers applauded the whole cast of Beauty and The Beast Broadway musical for delivering a world-class act even when the show was abruptly put to a stop due to power outage. Beauty and The Beast's timeless tale about love and transformation stars (L-R) Darick Pead as the Beast, Jordan Aragon as LeFou, Adam Dietlein as Gaston, and Hilary Maiberger as Belle.

It deserved no less than a standing ovation.

As the cast sang the last few lines of the popular theme of Disney's Beauty and The Beast, Filipino theatergoers couldn't help but feel sentimental and wowed at the same time.

Based on Walt Disney's 1991 animated film Beauty and The Beast, the international tour of this much-loved Broadway musical finally made its debut in Manila.

A special preview of the cast's full technical dress rehearsal was held around 3 p.m. at the Cultural Center of the Philippines, last Friday, January 9.

THE MAGICAL SETTING. Opening with a hologram-like depiction of the enchantress who turned a self-centered prince into a beast, the Filipino audience were instantly captivated by this magical tale that values true love, inner beauty, and forgiveness. 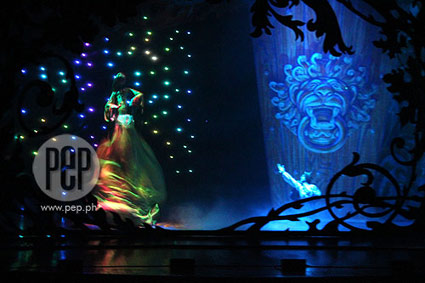 The stage design alone brought to life the quaint little town where Belle and her eccentric father Maurice live in.

From the storybook-type backdrop of green meadows, the library where Belle often borrows her beloved books, and the drinking well where villagers would often meet and gossip about the “odd” town beauty.

What further amazed Filipino theatergoers were the well-thought-of special effects and display of lights as it really brought out the magical theme of the show.

One such exemplary act was the part where Gaston and the villagers decided to kill the Beast and embark on a long cold walk from the town to the dark forest where the “monster” resides.

Aside from the electric torches that the mob held in their hands, the production team made use of special lights that suggest falling snowflakes in a cold winter night.

The castle's look was completed with luxurious hanging draperies, glittery royal chairs, and ambient lights on the moving set design.

There was also a gauzy stage screen, which the crew usually rolls down for fight scenes or if the need for a dream-like effect is needed.

It's definitely everything a fan of Beauty and The Beast imagined and more.

POWER OUTAGE POSES NO PROBLEM. The performance of the whole cast is no less spectacular. Led by Hilary Maiberger, her portrayal of Belle seemed straight out of Disney's animated film.

Her smooth and seamless singing voice almost sounded the same as that of Donna Paige O'hara, the voice of the female lead character in the 1991 Disney film.

She belted out well-loved songs from the stage musical such as “Belle (Little Town),” “Home,” “Something There,” and “Change In Me” among others.

Darick Peade, who played the Beast, also endeared himself to audiences by incorporating an unexpected sense of humor to his seemingly heartless character. Perhaps it was his interpretation of the Beast's vulnerability, which was also seen in the Disney movie.

As he grew more humane in the stage musical, the audience found themselves emphatizing with the Beast's difficult predicament, particularly when he sang “If I Can't Love Her.”

But it was Alan Dietlein—who brought to life the story's annoying villain Gaston—who turned out to be a revelation with his larger-than-life stage presence. Every time he comes out on stage, he definitely gets the audience's complete attention to his song numbers including “Me,” “Gaston,” and “The Mob Song.”

He did a perfect portrayal of Gaston, the town heartthrob with a high dose of superiority complex and narcissistic attitude. His movement on stage was so precise in a way that it further adds credence to his obssessive character.

There was never an awkward moment in their song numbers even when the show was abruptly put to a stop due to power outage according to the show's announcer.

It happened during the production number for “Be My Guest,” wherein the enchanted castle's household staff try to make Belle feel welcome even though she was technically being held captive by the Beast.

After a ten-minute break, the cast members surprised Filipino audiences by starting at the exact part where they left off.

What could have been an anti-climactic moment only made the viewers applaud the world-class talent and professionalism of the whole cast.

Beauty and The Beast Broadway musical is being staged at the Cultural Center of the Philippines (CCP Main Theater) from January 10 to 25 at 8 p.m. with matinees at 2 p.m. on Saturdays and Sundays.


For ticket inquiries about Beauty and the Beast, call Ticketworld at Tel. No. 891-9999 or visit TicketworldOnline.

(To view photos of the Manila run of Beauty and The Beast, CLICK HERE)