10 things to know about the Vagina Monologues 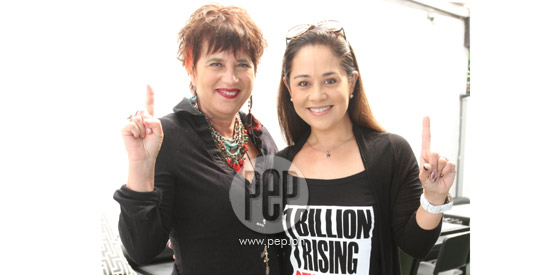 Vagina Monologues pioneer Eve Ensler (left) talks to PEP.ph about her phenomenal play. In this photo, she is photographed with Monique Wilson.

The Vagina Monologues play is an eye-opening revelation for the whole world, not just for women.

Its segments, performed as a solo or by multiple artists, tackle the ins and outs of the precious female anatomy where no topic is considered private. The monologue has been translated into over 48 languages, breaking the language barrier to find so many words synonymous to vagina. It has been performed in over 140 countries by various women of all walks and talks of life and,
though it was created over a decade ago, its message is still strong and relevant today.

Eve Ensler is the genius who wrote and performed the original genital masterpiece. The Tony award winning playwright is here in the Philippines to promote the 1 Billion Rising Revolution, a celebration to stop violence against women organized by the global activist movement V-Day.

She took time to answer ten questions about the Vagina Monologues, where repeatedly mentioning the word vagina is done copiously and without shame.


1. What gave BIRTH to the VAGINA Monologues?

Eve Ensler: It was a conversation with a woman who was going through menopause.

She was talking about her vagina in a very kinda, negative way. I was surprised and I became curious. I started asking other women about their vaginas.


2. Which VAGINA Monologues segment is a CLI, er, HIT with the audience?

Eve Ensler: It depends on where. In the Philippines, "My Vagina was my Village" is the most popular one because I think there's a lot of resonace with it. In some places, it's "My Angry Vagina". In the LGBT community, "The Moans" is the most awaited, yeah.

Eve Ensler: You know, this is the most asked question ever: which is my most favorite monologue. And this is my answer: I love all my children. I don't have a favorite.


4. Which folks should be OPEN to performing the VAGINA Monologues?


5. Which places should the VAGINA Monologues be SPREAD to?

Eve Ensler: Everywhere on the planet. What we're talking about is a billion women on the planet being eviscerated. Until men have consciousness around violence against women, until men change the ideology about masculinity and manhood, until women know their vaginas, to see them, to talk about them, to protect them, things won't change. So I think as long as women are talking about their vaginas, it's not in the dark. It's not silence. It's not a secret. Secrets keep violence alive.


6. Which parts of the VAGINA Monologues were HARD TO SWALLOW by the public?

Eve Ensler: "The Coochie Snorcher" was a really interesting dilemma because all the Vagina Monologues are literary text, they are fictional. But they are based on hundreds of interviews that I did. And that particular interview, the woman had a very bad history of violence and her story was that she met a woman when she was young. She had this affair, actually she had one night with this woman who taught her how fabulous her body was.

When she did the interview with me, there was one line
in the interview that I took out. It was long before the Vagina
Monologues became V-Day and was at the core of the movement to end violence. She said to me "Well, if it was a rape, it was a good kind of rape. It turned my coochie snorcher into a kind of heaven." I thought 'Wow.'

Now when I wrote that, it was before the play represented something. Once it came to represent something, a lot of survivors came to me and said, "You can't say that there's any such thing as a good rape."

So it was a real conflict for me as an artist because what was interesting about that monologue was the ambiguity of it; that someone was saying, "I've been raped, I've been raped, I've been raped. But if this was a rape, it was a good rape." So that was complicated. I made the decision eventually to change it because the play was representing something to so many people but I'm not sure that was the right choice. But I made that choice because I didn't want it to be this polarizing conflict that was getting all the attention where the play couldn't keep doing it's work.


7. What is your POSITION on the gay following of the VAGINA Monologues?


8. Have you seen the PENIS version of the VAGINA Monologues?


9. What are the plans inVULVA, er, INVOLVING the VAGINA Monologues this year?

Eve Ensler: The Vagina Monologues, during a certain period of time, I give away for free, so people can put up performances that raise money in their own communities. And every year, people sign up to do it. This year, there's hundred and hundreds of people, last I checked. Usually there's thousands of productions. All the money that gets raised stays in the communities. So that will continue as usual... Over the years, there's been thousands and thousands and activists today have
raised over a hundred million dollars through those productions.


10. TWA, er, TO WHAT end do you see in the future for the VAGINA Monologues?

Eve Ensler: I'm going to be honest with you. Every year, I think it's going to be the last year that people do this play. I'm like "Are we done with the Vagina Monologues yet?" I say with my team "Ok, no one will sign up again." And they go "No, you're wrong."

This is the 20th year since I wrote it and there's part of me that's
happy that it's still getting done, as a writer, as a playwright. But
there's part of me that wants it to be outdated. When we don't need it. When people go "Oh my god, remember when women had to talk about their vaginas? We're so liberated now! We don't even do it anymore! There's no more violence! Oh my god, why would we even need the Bosnia Monologues? That's so old hat."

I would love that to be true. That would be my dream; you make my play obsolete because it's not necessary anymore, even though it would be sad for me as well. [laughs]