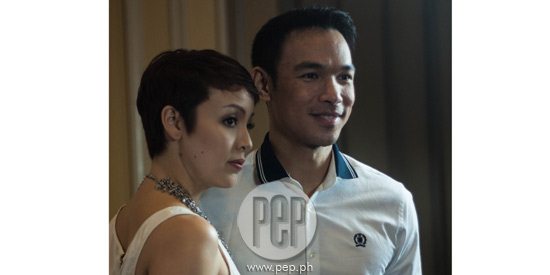 Three decades after it was first seen in cinemas, the Sharon Cuneta classic film Bituing Walang Ningning will be adapted into a musical play.

Mark Bautista and Cris Villonco were chosen to portray the roles of Nico and Lavinia, respectively, in the theater version to be staged at Resorts World Manila soon.

The manager Nico Escobar was originally played by Christopher de Leon in the movie version.

Meanwhile, Cherie Gil was the original actress who portrayed the villainess Lavinia Arguelles. The role of Lavinia became iconic when she told an innocent Dorina (played by Sharon), “You’re nothing, but a second-rate, trying hard, copycat!” before splashing a glass of wine on her rival’s face.

The movie was based on a serialized comic strip by Nerissa Cabral. In 1985, Viva Films released the movie starring Sharon as the sampaguita vendor-turned-singer Dorina Pineda and her fierce rival Lavinia (played by Cherie Gil).

In 2006, it was also adapted for television with Sarah Geronimo playing Dorina and Angelika dela Cruz as Lavinia.

During the press launch of the 2015 Imperial Festival held yesterday, January 29, it was revealed that Viva Communications inked a partnership with Resorts World Manila (RWM) for the theater adaptation of the classic drama.

AUDITIONS TO BE HELD FOR DORINA ROLE. Who will fill in the shoes of Sharon Cuneta?

To answer this question, a series of auditions will kick off this February as producers search for the next Dorina.

RWM and VIVA will hold auditions for the role. According to Direk Freddie, they will be holding their auditions at the The Plaza in New Port Mall for a reason: to show the over-all impact of the girl.

“We are holding the auditions in the atrium, the huge atrium at Resorts World.

“And there is one reason for that: to feel the impact of this girl.

“The impact of her voice when she sings, the clarity of her speech when she talks, but more than anything, the impact that her whole persona brings.

As such, they will hold auditions on February 28 and March 1. The auditions are open for both amateur and professional artists between 16 to 20 years old.

Besides bagging the lead role of Dorina, the lucky girl will get a P1 million worth of movie and recording contract with Viva.

CRIS AND MARK AS LEAD STARS. As early as now, Cris and Mark are both preparing for their roles.

Mark pointed out: “I haven’t watched the film, and I’m not planning to watch it.

“So I have to read the script and start from zero."

He also told PEP.ph (Philippine Entertainment Portal) that he is feeling the pressure of living up to the standards set by his predecessor.

For her part, Cris is very excited to do another kontrabida role. She is currently seen on TV as Lorraine in the GMA-7 afternoon soap opera Ang Lihim ni Annasandra.

“One thing that I love about theater in such a long period of time is that the lead directors were able to give me my own playground to do different roles. I got Maria and I actually got to work with Mark [Bautista] in Noli Me Tangere as Maria Clara.

“And now that I’m venturing into more of film and TV, other people are actually giving me the chance to experiment and become a kontrabida.”

The granddaughter of musical legend Armida Siguion-Reyna also admitted that she likes showing her feisty side, just like her lola.

“So I think I got something from there, right? Whenever I do my mean face, it comes out.”

DIFFERENCE FROM ORIGINAL MOVIE. Cris excitedly shared that their version might be bigger than its previous versions – most especially with the songs that they will use for the musical.

“Because with the songs that will be part of this show, it will cross generations,” she explained.

“And definitely, Bituing Walang Ningning, it’s about the glitz, the glamour and the behind-the-sayings of being a star.

“So what better way to do it than in a very big stage that will show a lot of spectacular things and fabulosity.

“So I think it’s the perfect, perfect venue to have Bituing Walang Ningning.

“And what’s even better, it’s a Philippine production.

“And from a little tidbit of information that I received, with the songs, it’s beautiful, beautiful.

“I have a feeling people will watch this, again and again, just to listen to how beautiful those songs were.”

Director Freddie also re-affirmed Cris’ statement about the songs that they will use.

“All the music is OPM. I know that in the film clip earlier, you saw Sharon singing covers, but no, that was then, that was in 1984.

“But today, we have such a wealth of the music of Willy Cruz, so all his songs are throughout this show, that’s why Cris is so enamored because the music is so spectacular and beautiful.”

He also said that they will be faithful to the movie version but they also made a few changes in the theater adaptation.

“We are following the general plotline of the movie, because we want to pay respect to both Nerissa Cabral and Direk Maning Borlaza.

“But also because this is the stage, some parts need to be enlarged, enhanced, para mas maging malinaw yung conflict and that’s what we’ve done with the script so far.”

The musical will mark the first time that a contemporary drama has been created and adapted into different Filipino media platforms – from print, movie, television, and now in theater.