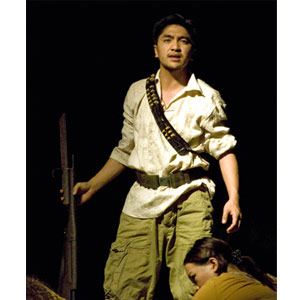 Wenceslao Vinzons (played by Roman Ordoña in the musical Bintao) waged underground operations against the Japanese troops stationed in Camarines Sur. Alumni of the University of the Philippines recently staged a musical to honor the memory of the young hero.


The musical Bintao: Ang Buhay at Kamatayan ni Wenceslao Q. Vinzons was staged recently at the Theater of the University of the Cordilleras in Baguio City.


Wenceslao "Bintao" Vinzons is the hero from Camarines Norte after whom the student center at the University of the Philippines in Diliman was named. But beyond Vinzon's Hall and his roots in the Bicol region, Wenceslao Vinzons has not been accorded his place in our hall of national heroes. He is mentioned only in passing in our history books.


The people behind this musical production aim to change all that. They share much with Bintao who was a student leader at the University of the Philippines in the '30s. He studied law, was a member of the Upsilon Sigma Phi fraternity, editor-in-chief of the Philippine Collegian and president of the Student Council. Among his contemporaries were former vice president Arturo Tolentino and former UP president Salvador Lopez.


The play's producer, Leonides Bautista, is a UP alumnus and an Upsilonian, just like Vinzons. His parents, Fernando and Rosa Bautista established the University of Baguio. The University of the Cordilleras was also established by UP alumni. The director, Ferdinand John Balanag went to UP, as did a few members of the production. The staging of the play, penned by Upsilonian Efren Yambot, is in solidarity with the centennial celebration of the state university this year.


The musical runs three hours long, spanning the relatively short but eventful life of Vinzons. Bintao was an activist politician during the Commonwealth period, when the young republic was undergoing transition. He was the youngest member of the Constitutional Convention in 1934, where he was very vocal about his opposition to several provisions, including the extraordinary powers to be given to the president. He saw that these could be open to abuse.


Sounds familiar? The issues Bintao witnessed in his time reverberate to this day: there are still enterprises owned by wealthy, landed, foreign elite; farmers and fishermen living on meager income, and power-hungry politicians whose actions do not represent the people's interest. An important insight is that the idea of the "pork barrel" dates back to this time. Bintao was among those who already saw its potential for corruption. He also appreciated the value of land and implored his kababayans to plant rice in preparation for the impending war.


The musical Bintao opens with a repertoire performed by the ensemble, inviting the audience to look back on Vinzons life. Well-sung and well-choreographed, the opening number takes the audience back into the annals of history. After the prologue, the play slows as it establishes Bintao as a campus stalwart.


Though it is clear that the intention is to establish that his education at UP (both inside and outside the classroom) influenced his later actions, some parts could have been compressed. The barrage of familiar names, dropped left and right, will strike the audience as information overload and cause distraction from the action onstage.


The cast members are at their best singing as an ensemble. Most of them students, their performances falter in some scenes, and they pale alongside veteran theater performers. Karlo Altomonte commands respect in his role as UP president Rafael Palma; John Glenn Gaerlan, who bears a strong resemblance to his real-life character Amado V. Hernandez, sings with his usual fervor; and Jojo Lamaria draws emotions as Dr. David. Young Angelo Aurelio's portrayal of the commanding Japanese officer is chilling.


Roman Ordoña, as the lead character, bears a strong resemblance to Vinzons himself. He owns this role, drawing the audience into his passions, convictions, frustrations, and desperation. His voice is clear and hits the right notes, most especially in the upbeat number "Lusob."


Suzette Punzalan, as Vinzons' wife Liwayway, is the picture of a smart, compassionate wife who stands by her husband. Her voice shines when she sings "Ang Muli Kang Makapiling," when she makes the very difficult decision of bringing her children to safety and leaving her husband's side.


Movement, light and sound come together to make an impact and move the story along. And we wish there were more of them.


There are many ingenious, multimedia features of the play. In Act 1, a scene is projected on a video screen, showing a gathering of politicians complaining that Bintao is not cooperating and does not "dance to the same tune". Later on, footage of Japanese planes bombing the city are also projected to show the beginning of the war that triggered the guerrilla offensive. A voice-over narration accompanies Bintao's tip-tapping on an old typewriter as he composes a letter to his old friend SP Lopez in his guerrilla hideout.


Technically excellent and emotionally moving is the scene of the Japanese attack on the guerrillas' hideout. With sparse dialogue, the audience feels the anguish of the rebels cornered by the enemy and Bintao's desperation as he tries to protect his young son from the crossfire.


Though the play shows many political views and societal practices that still pervade Philippine society, at its core, Bintao is very Filipino in its characterization of the family. Ultimately, the family remains the most basic and fundamental unit of our ever-changing society.


Through the musical Bintao, organizers hope that the hero of Camarines Norte and a UP alumnus will not be forgotten over time.