THEATER REVIEW: The Boy in the Bathroom 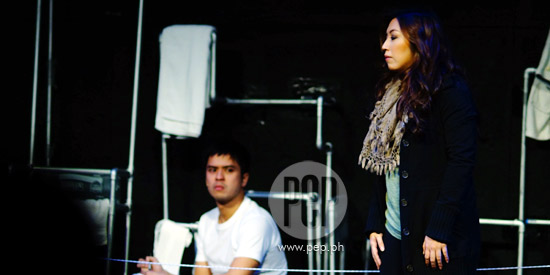 These days, we hear people say they’re O.C. or na-o-O.C. when they want to emphasize how neat they are or to explain why they color code their wardrobe.

Well, those people may or may not really have Obsessive Compulsive Disorder (OCD), which is defined by the International OCD Foundation, through its website, as a “disorder of the brain and behavior” that “causes severe anxiety in those affected.”

OCD, the website adds, “involves both obsessions and compulsions that take a lot of time and get in the way of important activities the person values.”

David, the 25-year-old central character in the musical The Boy in the Bathroom, is someone diagnosed with OCD.

He’s obsessively concerned about germs and getting contaminated that one day, he compulsively locked himself up in his bathroom, where he feels safe and spotless.

For the next 12 months or so, David’s daily routine includes sitting on the toilet seat as he ponders on the college thesis that he’s supposedly working on and as he scribbles notes on toilet paper.

He gets his daily meals from his mother Pam, who painstakingly slides food under his bathroom’s door. While he has no problem with this setup, Pam has to find thinly manufactured food that can get through to David.

Pam, a single working mother, needs someone to take out the trash and shovel the snow. She asks her son to help her, but to no avail. Even after she slips on the snow and she has to be taken to the hospital, David still wouldn’t come out of his bathroom.

Pam ends up breaking her hips and hiring a young woman named Julie to clean up the house while she attends her therapy class. But Pam is never satisfied with Julie’s cleaning up because she herself is obsessed with cleanliness and neatness.

Julie admits to being a claustrophobic and wanting to get out of Michigan, the story’s setting, so she can fulfill her ambitions.

As they go through this relational process, their individual stories, as well as Pam’s, are revealed. In the end, David makes a life-changing decision.

The Boy in the Bathroom’s book and lyrics are written by Michael Lluberes (with additional lyrics by Joe Maloney). It was part of the official selection of The New York Musical Theatre Festival in 2007, and won top honors there, including the Best Book Award and the Most Promising New Musical Award.

In 2011, the three-character and one-piano production premiered at the Chance Theater in California, and has since been staged in different states in the U.S.

In October 2014, The Boy in the Bathroom debuted in Manila, with two shows, via The Imaginarium, a multi-arts festival spearheaded by the theater group The Sandbox Collective.

Last February 19 and 21, The Sandbox Collective restaged The Boy in the Bathroom, also with two shows, as part of the first Manila edition of the global Fringe festival.

Hopefully soon, the musical will have a proper run, where there will be multiple show dates in a bigger venue, so that more people will get to experience this extraordinarily engaging and endearing theater piece.

For starters, the material is well thought out and adeptly written. It lets the audience understand the OCD sufferer, the people around him, and how his situation affects his relationship with them not in a preachy and boring way, but in a quirky and entertaining fashion.

The creative team behind all the Manila shows—director Toff de Venecia and cast members Topper Fabregas (as David), Caisa Borromeo (as Julie), and Sheila Francisco (as David’s mother Pam)—succeed, to certain degrees, in translating the material’s creative brilliance from print to the stage.

But, of course, there’s plenty of room for improvement: a better set design that clearly denotes the bathroom’s door; a smoother transition from one scene to another; less of David’s childishness; and more vocal power for Pam.

Maybe these flaws and other kinks will be fixed by the time The Sandbox Collective once again restages the musical.