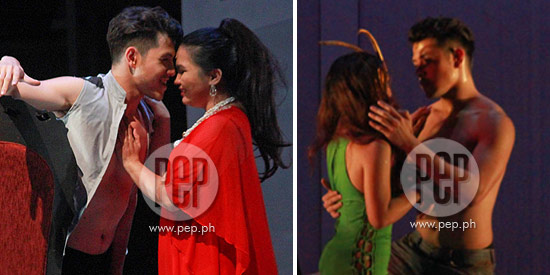 In Manhid: The Pinoy Superhero Musical, Filipinos are endowed with magical gifts living in an alternate present day Philippines where the EDSA revolution failed. This musical features heroes and villains with superpowers, and a people sick with Kamanhiran (Apathy). (For tickets, call Ticketworld at Tel. No. 891-9999 or to visit Ticketworld Online,

By now, you may or may not have heard about Ballet Philippines’ Manhid: The Pinoy Superhero Musical. After all, two of the Philippines’ most admired bands have been associated with it: The Eraserheads and Radioactive Sago Project.

In 1991, Ely Buendia, Raymund Marasigan, Buddy Zabala, and Marcus Adoro were college students in University of the Philippines-Diliman when they were tapped to compose the music of the play. Their band Eraserheads, which was formed just two years prior, provided the musical accompaniment during its run. One of their mainstream hits, “Kailan”, is actually from Manhid.

Since then, co-collaborators Kanakan-Balintagos (Aureus Solito) and Paul Alexander Morales, have also made names for themselves in the field of filmmaking and theater/ballet, respectively.

How does it feel to watch Ballet Philippines’ Manhid: The Pinoy Superhero Musical?

The elements come together to make a very original combination. The choreography by Paul Alexander Morales and Alden Lugnasin is amazing, and beautifully executed by the members of Ballet Philippines. The songs offer a good mix of angst and anger and the instrumentation by Radio Sago Project is on point. The voices of Sandino Martin (as Bantugan), Teetin Villanueva (as Lam-Ang), Kim Molina (as Allunsina), Jean Judith Javier (as Dilim), KL Dizon (as Urduja), and Fredison Lo (as Radia Indarapatra) are all clear, strong, and send shivers down your spine.

The characters are varied…this makes for an explosion of creativity: individual costumes, characterization, movement… but also, a challenge: how to get the audience familiar and grab a hold of their imagination in a few minutes enough to sustain them for the rest of the narrative. It is a big challenge, especially for the masses of those unfamiliar with the lore.

It strives to achieve too much. In three acts, it needs to establish a believable alternate universe where not only did the EDSA People Power Revolution of 1986 fail but where children of that revolution have been endowed with different and varied superhuman powers.

Since the assumptions are unfamiliar, theatergoers grapple to catch up with the sung narrative and understand what has happened so far and which part in the narrative we are now.

Manhid. Apathy. It is a good way to describe the present malaise eating up at majority of the population. It is a good jump-off point. But it is not prevalent in the entire play. In each act, there is an average of one scene involving the masses of people. Instead, the superheroes vie for the spotlight to tell their story, sing their songs.

The characters are named after various protagonists in traditional Filipino epics. Some may recognize names like Urduja or Lam-ang, but others are not in the mainstream consciousness. Even if you actually remember the names and characters from elementary school education, they do not correspond to more than names based on the epics—that is, their powers or characters are not the same as the epic characters’.

Still and all, the staging of Manhid at the CCP Main Theater with such a formidable cast is a feat worth commending. It is a milestone that makes the apathy or even the doubt that there is hope for the arts in the Philippines dissipate.

Directed by Paul Alexander Morales, Manhid will run until March 6-8 at the Tanghalang Nicanor Abelardo (CCP Main Theater), Cultural Center of the Philippines.

(For tickets, call Ticketworld at Tel. No. 891-9999 or to visit Ticketworld Online, CLICK HERE)