National anthem performers from past inaugurations 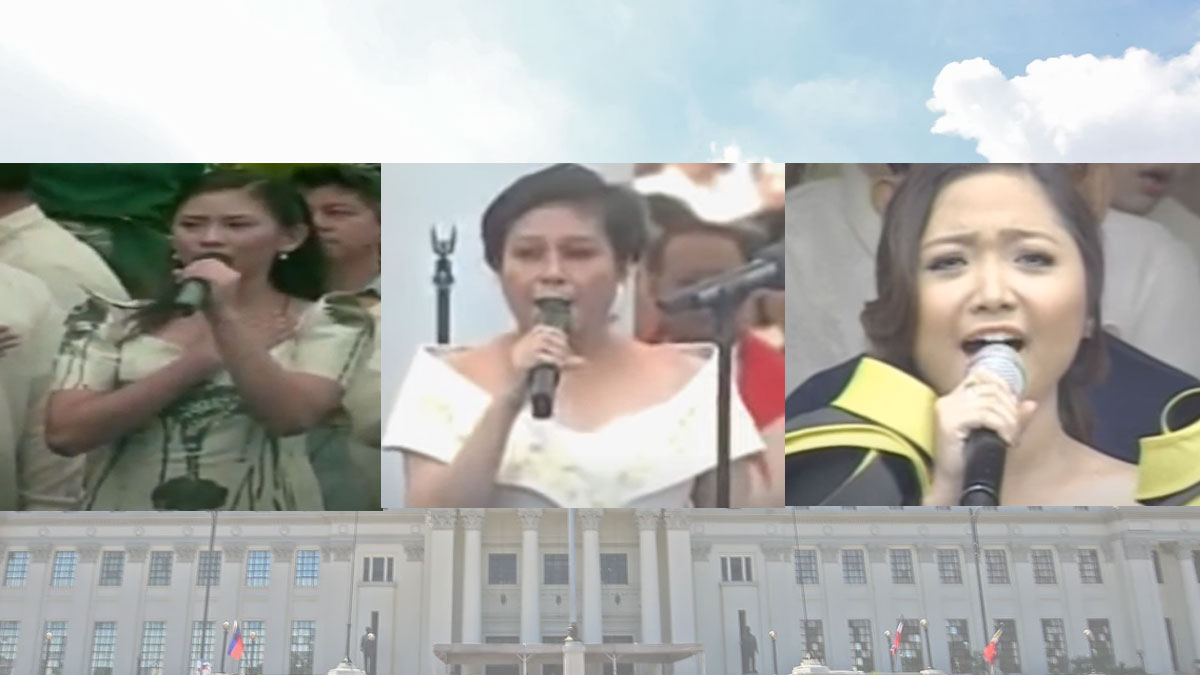 Presidential inaugurations are historic and symbolic.

The occasion signifies the end of an era and the beginning of a new administration.

On Thursday, June 30, 2022, Ferdinand “Bongbong” Marcos will officially take his oath as the 17th president of the Philippines.

Hosting the event is the National Museum located in the city of Manila.

While the venue and program vary over the years from one president-elect to another, one part of the festivity remains constant: the singing of the “Lupang Hinirang” or the Philippine national anthem.

However, the way the national anthem is played during presidential inaugurations has changed.

In the past, the instrumental version of the “Lupang Hinirang” was played during the ceremony.

Later, organizers started tapping celebrity singers to deliver the song and liven up the occasion.

For Marcos Jr. inauguration, Toni Gonzaga, the actress-singer and BBM's staunch supporter, will be singing the national anthem.

Singer-actress actress Cris Villonco, meanwhile, will perform the inauguration song titled “Pilipinas Kong Mahal” together with the Young Voices of the Philippines choir.

It was also reported that pianist Cecille Licad and singers Robert Seña and Isay Alvarez will grace the reception dinner in Malacañang.

With that said, here's looking back on past presidential inaugurations and the artists tasked to sing the national anthem.

Garnering more than 10 million votes en route to a landslide victory, the actor-turned-politician Joseph “Erap” Estrada defied his many critics to become the country’s 13th president.

Estrada took his oath at noon on June 30, 1998, at the Barasoain Church in Malolos, Bulacan.

Barasoain Church is historic, the site where the First Philippine Republic was established led by the country’s first president, Emilio Aguinaldo, on January 22, 1899.

President Estrada then proceeded to the Quirino Grandstand in Manila to deliver his inaugural speech.

Gloria Arroyo’s ascend to the presidency was swift and hasty, to say the least.

Beleaguered by growing unrest and resignation calls due to corruption allegations, Joseph Estrada relinquished the presidency on January 20, 2001.

Then Vice-President Arroyo went to the EDSA Shrine to take her oath as president before Chief Justice Hilario Davide Jr.

The turn of events and the circumstances deprived the occasion of the typical program carried out during a presidential inauguration.

It was different though when Arroyo assumed the presidency on June 30, 2004, giving her a full six-year term to lead the country.

For context, Arroyo’s first duty as president from 2001 to 2004 came after Estrada stepped down.

As vice-president, Arroyo was mandated by the constitution to assume the presidency should the position become vacant, as what happened in the case of Estrada.

Take note that the Philippine Constitution states that the president can only serve for one term, which is six years in total.

However, it also mentions that a president's successor can seek a full-term presidency provided that he or she has not served for more than four years.

Thus, Gloria was allowed legally to run for president during the 2004 election, which she did and won in a controversial fashion.

For her second inauguration, Arroyo chose the Cebu Provincial Capitol in Cebu to take her oath on June 30, 2004.

It was Nora Aunor who sang the national anthem.

But before flying to Cebu, Arroyo delivered her pre-inaugural speech at the Quirino Grandstand in Manila.

Noynoy followed in the footsteps of his mother, democracy icon Corazon Aquino, whose inspiring campaign in 1986 toppled the two-decade rule of dictator, Ferdinand Marcos.

The Quirino Grandstand hosted the inauguration.

Also performing at the occasion were the APO Hiking Society, Gary Valenciano, Regine Velasquez, Ogie Alcasid, and Noel Cabangon, among others.

From Davao City Hall to Malacañan Palace, Rodrigo Duterte assumed the presidency on the strength of more than 16 million votes.

Duterte was sworn in as the country’s 16th president on June 30, 2016, at the Rizal Ceremonial Hall of the Malacañang Palace in Manila.