Monica Cuenco is the third actress to portray Dorina, after Sharon Cuneta and Sarah Geronimo 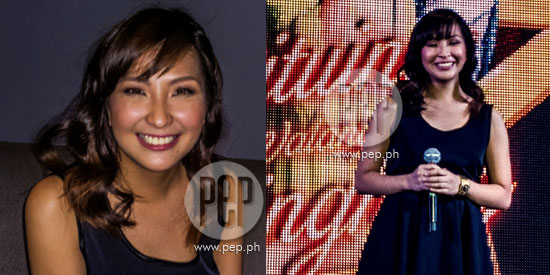 Art imitates life when it comes to Monica Cuenco, the singer-actress who has been chosen to portray Sharon Cunetaâ??s Dorina in Bituing Walang Ningning the Musical.

In the original 1985 movie, Sharonâ??s character Dorina has a scene wherein she performs at a wake. In real life, Monica has also experienced singing at a wake in order to make ends meet.

The 20-year old Cebuana had a rough start in life when she lost her father to cardiac arrest when she was 4 and her mother to cervical cancer 11 years ago.

Monica then lived with her aunt in Ormoc City where she found ways to earn money.

Being orphaned at an early age drove her to accept singing engagements when she was a teenager. Monica says that singing at a wake is her most memorable experience because it reminds her of her mom.

Just like her stage counterpart (Dorina sold sampaguita), Monica used to sell puto cheese with her sister back in Cebu so they could support their studies. In fact, press people and guests at the event were able to sample this puto cheese.

Winning the competition did not only give Monica her big break, it also paved the way for her reunion with her â??ateâ?? whom she has not seen in 11 years.

ON THE MEGASTAR AND THE POPSTAR PRINCESS. Monica has the huge challenge of meeting the expectations of those who might compare her performance as Dorina to the original 1985 movie and the TV adaptation aired by ABS-CBN in 2006.

Megastar Sharon Cuneta brought life to the fan-turned-singer in the original movie while Popstar Princess Sarah Geronimo reprised the role on television.

The Bituing Walang Ningning the Musical production isnâ??t the first time that Monica experienced being in the limelight.

Monica was named as second runner-up in Star Power next to Krissel Valdez (first runner-up) and Angeline Quinto (grand winner).

After briefly being part of ASAP, the reality show alumna decided to go back to her hometown to pursue her studies.

TRYING HER LUCK ONSTAGE. Aside from earning the lead role in Bituing Walang Ningning the Musical, Monica also bagged an exclusive movie and recording contract with VIVA Communications, Inc. worth P1 million. She is also considered a contract artist for Full House Theater Company Entertainment and Productions Inc.

Mark Bautista is cast as Nico Escobar, her leading man in this musical. The GMA-7 actor plays the role originally portrayed by Christopher de Leon in the movie.

Monica candidly admits that she felt awkward while conducting a pictorial with her leading man, whom she refers to as â??Kuya Mark.â??

WHY MONICA CUENCO WAS CHOSEN. Monica was able to beat over 50 other auditionees who tried out for the role of Dorina.

â??By doing the musical, we have discovered a possible superstar in Monica. In the next three to five years, she may be one of the hottest multimedia stars in the Philippines. And I guessâ?¦abangan nila yun for the next few years.â??

When asked about their basis for having chosen her, a member of the audition panel said, â??Weâ??re looking for somebody that fits the role. But, what I personally saw in Monica, is her innocence. This is a musical so singing is quite important and her personal life story, kung saan pwede niyang paghugutan for the role. She has all the ingredients. Although she has not done theater, we believe that she will do well.â??

Other cast members are Cris Villonco as Lavinia and Ronnie Liang. Thespians Michael Williams and Menchu Lauchengco-Yulo will also be playing important roles in Bituing Walang Ningning the Musical. The production is slated to open this June.