Christian Bautista in search of Maria for "West Side Story" 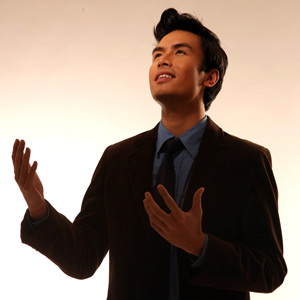 The original Broadway production of West Side Story was staged in 1957, marking 2007 as the 50th anniversary of this grand musical about feuding New Yorkers and Puerto Ricans. Christian Bautista (in photo) plays Tony, an ambitious young man who dreams of spending his life with his beloved Maria.

Christian Bautista portrays the role of lovestruck Tony in STAGES' production of the popular Broadway musical West Side Story, which is scheduled to run at Meralco Theater in September-October 2008.


West Side Story is an energetic, melodramatic musical that is a modern-day retelling of William Shakespeare's Romeo and Juliet. But instead of feuding families, there are conflicts between rival street gangs and the setting is the Upper West Side of New York City instead of fair Verona.

Christian's leading lady Maria, as well as supporting roles Anita, Bernardo, Riff, among others, have yet to be cast. Open auditions for singers and dancers aged 17-30 will be conducted on March 29-30, 10 a.m.- 5 p.m. at Stand Studio, Brahma Building, 172 Mabini Street, Addition Hills, San Juan, Manila.

Maria must be pretty and slim. She has to be a soprano 1, preferably with classical or musical theater voice training.

The rest of the cast should be a mix of mestizo and Pinoy-looking actors. They must be strong dancers who can sing, preferably with jazz, ballet or hip-hop background.

Aspirants must bring 3R colored photo, resume and minus one CD. Singers must be able to sing a song from any stage musical.

STAGES' production of Broadway's West Side Story is its third major theatrical offering after Footloose The Musical in 2005 and High School Musical On Stage last year.

West Side Story will be marketed in Indonesia, Thailand, Malaysia, and Singapore, where Asian pop idol Christian Bautista has a strong following.

West Side Story is presented through special arrangement with Music Theatre International (MTI) in New York.