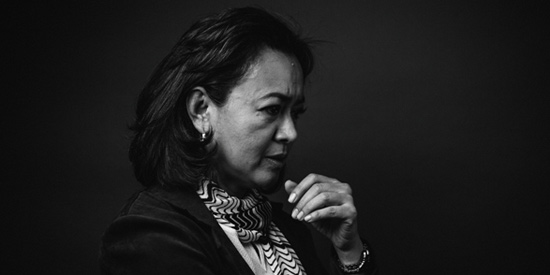 In 33 Variations, Shamaine Centenera-Buencamino (in photo) is cast as a musicologist who has a broken relationship with her daughter (played by Ina Fabregas). For tickets to this play, call Ticketworld at Tel. No. 891-9999 or visit

A play about a musicologist studying Beethoven will open the third season of Red Turnip Theater.

In 33 Variations, Shamaine Centenera-Buencamino plays the musicologist who has a broken relationship with her daughter (portrayed by Ina Fabregas).

It will open on July 24 and will be staged during the weekends until August 23 at Whitespace, Makati.

Written by Moises Kaufman, 33 Variations tells the story of a renowned musicologist, Katherine Brandt, who is on a mission to discover why Beethoven composed the Diabelli variations, considered as one of his greatest masterpieces.

Her daughter, Clara, is on a mission to find her place in her mother's world. She is a costume designer who wants to transition into set design.

Together, they maneuver through Beethoven's colorful life, their own challenging relationship, and somehow find their answers within his music.

Shifting between periods and places, 33 Variations is the story of mothers and daughters and the legacies we long to leave behind.

Katherine races against time and the degenerative disease plaguing her, to solve the mystery of why Ludwig Van Beethoven wrote thirty-three variations on Anton Diabelli’s seemingly ordinary waltz.

Brandt and Beethoven’s lives unfold in parallel, as scenes flit back and forth from past to present, from Bonn to Vienna. By uncovering the truth about the Variations, she comes to terms with her estranged daughter and finds the courage to face her fate.

33 Variations made its Broadway premiere in 2009, famously marking Jane Fonda’s return to the theater after a 46-year absence in the role of Katherine. It went on to garner several Tony Award nominations, including Best Play and Best Actress for Fonda. It had previously won the Edgerton New American Play Award in 2007 and the Steinberg American Theatre Critics Association Best New Play Award in 2008.

Fresh off her heralded turns in Tanghalang Pilipino’s Juego de Peligro and the Cinema One Original indie film Lorna, Shamaine Centenera-Buencamino steps into the role of Katherine.

Her character is a musicologist who faces her mortality as she goes on a quest to find evidence that something mediocre can be transformed into the divine, whether it be Diabelli’s waltz or her estranged daughter. Through discovering why Beethoven wrote the variations, she discovers that it is in the moments of life’s variations where we find the divine.

Teroy Guzman plays Ludwig Van Beethoven, one of the world's most famous composers. Despite suffering progressive deafness, Beethoven became a defining figure in the history of Western music. He creates his most epic works, including the Diabelli Variations, through the most debilitating conditions of his life. Why he becomes obsessed with the simple waltz answers how his music provides the answers to those struggling in the present.

Anton Diabelli is an Austrian music publisher whose waltz was the basis for the 33 variations by Beethoven. A businessman first, he dreams of composing and covets the attention of the great composers of the day. Despite his futile attempts to be strict with deadlines and parameters, he falls prey to the beauty of Beethoven’s work—and his own narcissistic interests in hearing his waltz infused with greatness.

Anton Schindler is Beethoven’s associate and (unpaid) secretary. His calling card describes him as “a friend of Beethoven.” Schindler wrote the earliest biographies of Beethoven; as early as the 1850s, however, his account was called into question as inconsistencies with historical records came to light.

Nevertheless, he is loyal, he looks out for his “master’s” best interests, and is the only one who puts up with Beethoven’s personality quirks.

Gertrude Ladenburger is a German librarian (with a doctorate) at the Beethoven Haus in Bonn, home of Beethoven’s archived musical sketches and conversation books. Gertie is a staunch lover and scholar of Beethoven. Through her stoic, sometimes imperious demeanor lies a good heart. She soon becomes a close colleague to Katherine, and ultimately a friend.

Rounding out the cast are fresh faces Ina Fabregas and Franco Chan.

Fabregas is Clara, Katherine’s estranged daughter who slowly starts to fall in love with her mother’s male nurse, Mike Clark, played by Chan.

The relationship between Mike and Clara is the defining picture of love in the story, and it epitomizes the journey that Beethoven was writing about in the Variations.

33 Variations also marks Red Turnip’s first show to incorporate live music: critical moments in the play are underscored by the Diabelli Variations themselves, played live and on stage by Ejay Yatco (Sa Wakas, Dani Girl, The Boy in the Bathroom).

Although he is mostly known as a composer and musical director, the 24 year-old has also competed at the 2013 World Championship of Performing Arts under the Classical Piano category, where he made it to the final 3 instrumentalists of the world and took home one gold and three silver medals. Yatco will be playing the Variations on a baby grand piano, provided by LYRIC.

“We had decided on this show almost two years ago, we knew it was what we had wanted to open the third season with. This play has been simmering in my head since then. 33 Variations is such an elegant, intricate piece of work and I am excited by the challenge of bringing it to life. I’ve also surrounded myself with a powerhouse cast and a young, energetic production team. I cannot wait for everyone to see what they’ve all brought to the table. It’s going to be unlike anything you’ve seen from Red Turnip so far.”


During the debut season of Red Turnip, they gave us the much talked about hits Closer and Cock, which was followed up with the critically-acclaimed sophomore season of Rabbit Hole and last February’s Time Stands Still.

All four productions have gone on to reap multiple awards and nominations from the Aliw and BroadwayWorld Philippine Awards, with Cock topping critics’ lists as the Best Play of 2014.


Tickets for 33 Variations are available through TicketWorld (Tel. No. 891-9999 or Ticketworld Online) or Red Turnip Theater (redturniptheater@gmail.com or https://www.facebook.com/RedTurnipTheater)