The Amazing Bubble Man show, La Soiree, Cookin’ Nanta and Beyond the Barricade to be staged in Manila this 2015 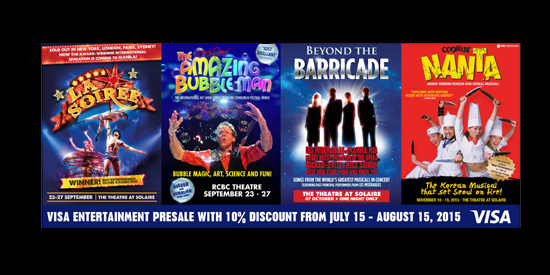 The producers behind the hugely successful Manila seasons of The Phantom of the Opera and Wicked are offering four new productions that will cater to audiences of all ages.

These shows follow hot on the heels of the hit West End musical Singin' in the Rain that opens in Manila on August 20.

The exciting line-up of shows from September includes:

Great news for all Visa cardholders! Advance tickets with a 10% discount will be available during the Visa Entertainment presale for all Visa credit, debit, and prepaid cardholders for the following shows from July 15 – August 15 or until tickets are sold out at www.visa.com.ph

Producer and CEO of Lunchbox Theatrical Productions, James Cundall said, “Our line-up for the rest of this year will guarantee fun for all, with a wonderfully eclectic range of shows – there is definitely something for everyone.”

“From The Amazing Bubble Man show which is filled with tricks to delight the kids to Olivier-Award Winning La Soiree, from the global sensation Cookin’ Nanta to the musical extravaganza Beyond the Barricade, you will not be disappointed.”

All shows are presented by Lunchbox Theatrical Productions and Concertus Manila. For information on ticket sales, call TicketWorld at Tel. No. 891-9999 or visit Ticketworld Online.

A deliciously decadent cocktail of astonishing acrobats, mind-bending feats and thrilling cabaret, La Soiree showcases hilarious entertainers from around the world in a show that celebrates difference and revels in the extraordinary.

An international sensation, this tight-knit, ever-evolving family of troubadours, chanteuses, dazzling divas and cabaret queens has smashed box office records across Europe, the USA and Australia, trailing a host of awards in its wake, including London’s 2015 Olivier Award for Best Entertainment and Best Unique Theatrical Experience at New York’s Off Broadway Alliance Awards 2014.

A unique and inspirational night of live entertainment, La Soiree is an adrenaline-fuelled rush of thrills, shocks, laughter and dizzying abandon which will leave you wanting to see it all over again. 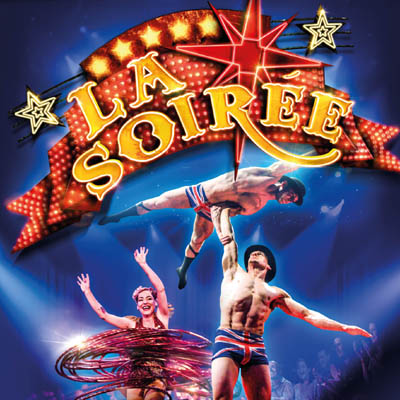 Louis Pearl, The Amazing Bubble comes to Manila for the very first time with his mesmerizing show.

The Amazing Bubble Man has been thrilling audiences around the world for nearly 30 years with the art, magic, science and fun of bubbles. He has performed to more than one million people, including royalty and celebrities, in hundreds of cities around the world. He is also a favourite at the world-famous Edinburgh Festival Fringe, where he returns this year for his eighth successive season.

From Helium bubbles, Rocket bubbles, Volcano bubbles, Tornado bubbles to Foggy Laser bubbles, and even Spaceship-in-Universe bubbles – The Amazing Bubble Man is set to enchant adults and children alike with his unique blend of skill and humour. 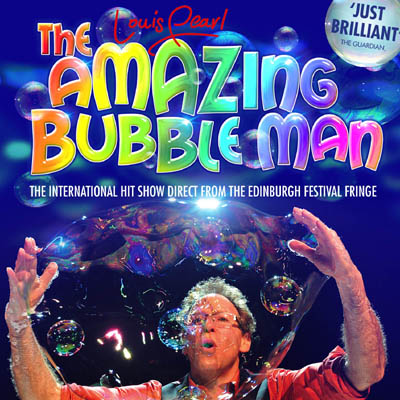 For one night only, enjoy the best-loved songs from the world’s greatest West End and Broadway musicals in a glittering concert.

Starring past principal performers from Les Miserables in the West End and on tour, the blockbusting two-hour show features hit songs The Phantom of the Opera, Jersey Boys, Evita, Wicked, Miss Saigon, West Side Story, Mamma Mia and many others, climaxing with a spectacular finale from, of course, Les Miserables.

The critically-acclaimed Beyond the Barricade has been delighting audiences throughout the UK and Europe for 16 years, from the Royal Albert Hall to the Cunard liners, and now makes its debut in Manila as part of an Asian tour.

The former cast members of London’s longest-running musical include Andy Reiss, who has played numerous male roles including Jean Valjean; David Fawcett, who played Valjean; Katie Leeming who played the role of Eponine; and Rebecca Vere, who played Cosette. They are joined by an ensemble of talented musicians to create an authentic live experience, capturing all the passions and orchestrations of the original shows. 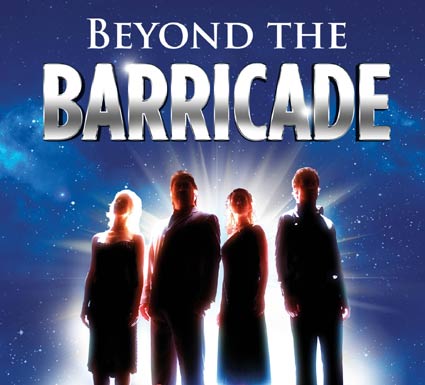 The kitchen is its backdrop, chefs its main characters. Knives and other kitchen utensils are transformed into musical instruments in the hands of the performers. They thrill the audience with acrobatic cooking shows, a surprise wedding ceremony, and an exciting dumpling challenge. The highlight of the show is a “Water Drum Sequence” where drummers beat 5 standing kitchenware drums with water and LED lights on them and this climax leaves the audience wondering whether it’s the drums or their heart beating.

NANTA has been one of the most popular shows in Korea ever since it premiered in October 1997, drawing the largest number of spectators in Korean theatre history.

NANTA made its international debut in 1999 at the Edinburgh Fringe Festival, where it received an award for the best performance. Since then, NANTA has shown in the U.K., Germany, Austria, Italy, Japan, Taiwan, Singapore, the Netherlands, Australia, etc. Eventually NANTA made it all the way to New York, premiering at the Minetta Lane Theater (off-Broadway) on March 7, 2004 and ran for one and a half years. Not to mention NANTA has become the first Asian show to open Off-Broadway!

An energetic spectacle for all ages, and the landmark of Seoul which attracts tourists from all over the world, NANTA aims to become the longest-running show in Korea. Its open-365-days theatre has welcomed more than 1 million foreign visitors and through its world tour (51 countries, 289 cities), it has thrilled more than 2 million people overseas. 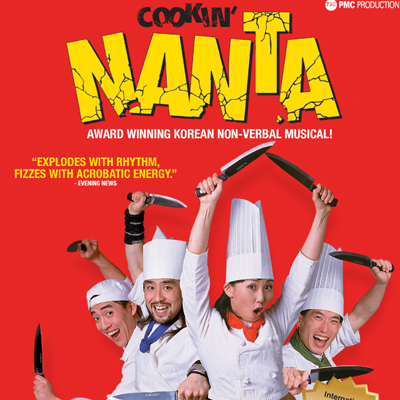 SINGIN’ IN THE RAIN

A huge theatrical splash in London’s West End, this multi-million dollar production of Singin’ in the Rain comes to Manila as part of an international tour, following a sell-out London season and a major UK tour, where it received unparalleled praise from critics and audiences alike, as well as four Olivier Award nominations.

Packed full of the charm, romance, comedy and Tinseltown glamour of one of the world’s best-loved movies, this spectacular show tells the story of the arrival of ‘talking’ movies and the first Hollywood musical, when the silver screen found its voice and left silent movies – and some of its stars – behind.

As well as toe-tapping songs including Good Morning, Make ‘em Laugh, Moses Supposes and the classic Singin’ in the Rain, the movie’s iconic choreography is brought to life, and with the help of 12,000 litres of water, audiences can enjoy one of the most famous dance routines live on stage.

With its joyous story, Singin’ in the Rain showers you with everything you could wish for in a hit musical.