THEATER REVIEW: Jasmine Curtis, Mikael Daez, Lauren Young and other stars capture angst and aspirations of millennials through No Filter 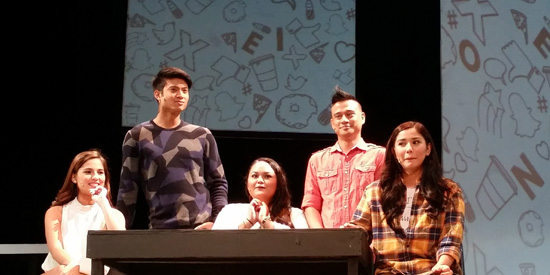 (L-R) Jasmine Curtis Smith, Mikael Daez, Cai Cortez, Khalil Kaimo and Lauren Young represent Generation Y in the monologue series No Filter: Let's Talk About Me. The millennials: are they sinners or saints? (For tickets, call Ticketworld at Tel. No. 891-9999 or visit

Social media-savvy individuals have been tapped to give voice to the millennial experience on stage.

This original monologue series by The Sandbox Collective tackles the angst and aspirations of Generation Y, who are often misunderstood and labeled as narcissistic and selfish.

Selfies, hashtags, tweets, Instagram posts, apps—all reflective of the now generation—twentysomethings for whom life is just beginning, and is one big question mark after another.

Some complain that they’re always glued to their tablets, iPhones and other gadgets; that they’re restless souls who are killing the art of conversation.

NO BIG DEAL. But these so-called millennials are not alarmed. They hold their chin up and assert, “That’s no big deal. We manage to stay connected. And we are who we are.”

Problem is, not everybody agrees. Parents scratch their heads and wonder what happened to the baby they used to cuddle. Why has he suddenly become like the wallpaper in the family dining room during meals and reunions—silent and detached? Why has he become a stranger in his own home?

Turns out the "stranger" is also a stranger to his own self—his claims to the contrary notwitstanding.

As one of the young characters in the play No Filter admits, he doesn’t know what to do with downtime.

Jasmine Curtis Smith’s fresh grad character stutters at first when a prospective employer interviews her for a first job.

Goals? Does she have them?

Why is she applying for a job in the first place?

But she soon regains her bearing, and replies to the non-stop questions.

INSTANT GRATIFICATION. Besides, this neither-here-nor-there stance, No Filter shows that this social media generation wants everything instant. While their parents stayed cooped in the office for years before finally climbing the corporate ladder, millennials choose to skip some steps and ricochet to the top of that ladder.

#YouOnlyLiveOnce, #LiveForTheMoment and other instant gratification themes are also their battle cries.

But it’s not the end of the world. #pleasingmomanddad, #findingyourself and #beingyourself are just as cool to them.

No Filter writers should know. They’re millennials –born between between 1982 and 2004. They not only speak the language of the internet, their young lives revolve around it.

To the young writers’ credit, they make no effort to gloss over their mistakes. No Filter monologues take one long look at millennials and shove a huge, untainted mirror of themselves right before their eyes.

Yes, they make excuses [we only live once, or something to that effect], but they also want to correct their flaws.

They write love notes to their past and future selves in an effort to give their life direction.

While they enjoy their peers’ company, they listen to their parents and elders, even if they don’t seem to be doing so.

Khalil Kaimo’s character recalls the lessons he learned from his dad’s retelling of the mythical Icarus tale—go spread your wings, but don’t stay too close to the sun lest it kill you.

You see two sides of the coin, and you’re allowed to draw your own conclusions.

BEST INTENTIONS. The verdict: yes, millennials are puzzling. But they have the best intentions.

So don’t you give up on them. You understand them, let them be, and guide them—occasionally—with emphasis on the word "occasionally."

They’re no different from the hippie generation of the ‘60s who rebelled against parents and the establishment.

This time, the millennials are fighting something else—getting caught in the trap of putting up an image just to look good in Instagram posts, selfies and social media accounts.

They are rebelling against the pressure of projecting an image far from who they really are.

They want to be real, period. Thing is, they don’t know how to go about it.

Just as yesterday’s hippie generation became today’s movers and shakers, millennials can always be the leaders of tomorrow.

Ten years from now, they will take out their faded notes to their present and future selves and laugh out loud.

Every young generation has hills to climb; mountains to conquer. Today’s millennials are no different.

Perhaps all we, the older generation need do, is stop scratching our heads, just shut up and support them.

All millennials need do, on the other hand, is continue finding themselves the best way they know how. If it’s through apps, selfies and other forms of social media, let it be – so long as they don’t burn themselves the way Icarus did.

But how do we make sure hubris won’t eat them alive the way it did to Icarus?

LIVE AND LEARN. As No Filter shows, millennials have a built-in system of checks and balance. They care—about their parents, about their future.

Someday, somehow, they’ll reach that stage in their lives when they won’t need any filters to make it. They’d conquer their fears of the big, wide world out there.

When that day comes, these millennials—far from being called bratty, self-centered and what not—will be our pride and joy.

Meanwhile, let them figure out the world their own way. That’s the best way for them to live and learn.


No Filter: Let’s Talk About ME is being staged on the following dates: July 31 and August 1 at 8 p.m. and August 2 at 3 pm., at the Carlos P. Romulo Auditorium, RCBC Plaza in Makati City. 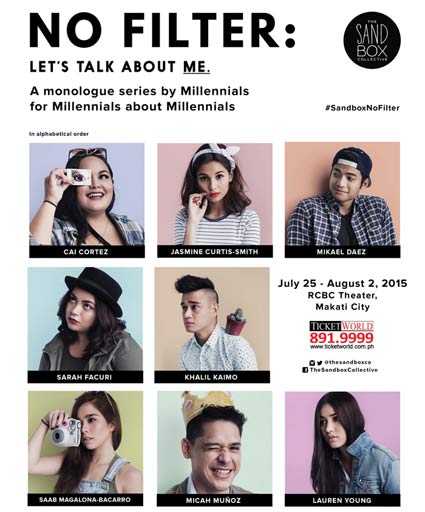