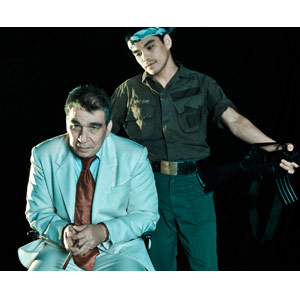 The Philippine Legitimate Stage Artists Group has recently revealed which productions garnered citations for the first and second quarter of the year. PHILSTAGE is in charge of the Gawad BUHAY!, the performing arts awards program that aims to honor the best stage productions in the country.

PHILSTAGE President Dennis Marasigan explained that Gawad BUHAY! honors outstanding accomplishments in theater, dance, and music among PHILSTAGE member-companies. Quarterly citations, nominations, and winners are determined by an independent panel of performing arts practitioners, critics, academicians, and enthusiasts invited or selected by the PHILSTAGE Board of Directors.


"The jury members are required to watch all productions of Philstage members and only those who have watched all productions are allowed to cast their final votes for the quarterly citations, nominations, and winners, " explained Marasigan, who is the also the artistic director of Tanghalang Pilipino.

The jury meets quarterly for the citations from which the qualified nominees will be picked and subsequently vie for the annual award to be announced and honored in fitting ceremonies during the National Arts Month in February 2009.

Kudeta is actually based on incidents in the Republic of Trinidad and Tobago located in the Carribean, though its plot is quite reminiscent of events that transpired in the Philippines. In the play, young military officers consolidate their position by trying to make their country's president sign a document confessing to crimes he committed against the nation. To regain power, the president must use everything in his possession.


Rep's Hamlet, a futuristic take on William Shakespeare's classic, was cited for outstanding play, ensemble performance, featured performance in a play for Cris Villonco, sound design Jethro Joaquin, lighting design for Martin Esteva and costume design for Faust Peneyra. The play has a feel suggestive of the ‘80s action film Mad Max, which explains other characters' Mohawk hair, as well as the nightmarish ambience of the set.

The sounds of South America take center stage in Latin Heat with the sensual, flamboyant rhythms of the salsa, rhumba, bossa nova, reggae, and Caribbean music.

Another TP production, EJ: Ang Pinagdaanang Buhay nina Edgar Jopson at Evelio Javier, was cited for outstanding male lead performance in a musical for The Dawn frontman Jett Pangan and Juliene Mendoza as well as for sound design which went to Jethro Joaquin.

Described by its director Chris Millado as a "rock memoriam," the production outlines the beginnings of social consciousness in the early lives of Edgar Jopson and Evelio Javier, their contrasting reactions to the turmoil in Philippine society, and their violent death.

For more information about the upcoming Gawad BUHAY! Awards and its nominees, please contact PHILSTAGE via email at philstage@tri-isys.com.


Here is the complete list of Gawad Buhay! citations for the first half of 2008: