Let Sam Concepcion, Cheska Ortega and PJ Valerio enchant you in a musical on May 17 and 24 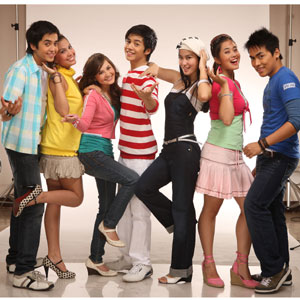 Hot teen idols Sam Concepcion, Cheska Ortega, and PJ Valerio reprise their singing roles as Troy Bolton, Gabriella Montez, and Ryan Evans in STAGES' High School Musical when Enchanting Teens Musical goes on stage. This one-hour show in concert format will be performed at the Enchanted Kingdom on May 17 and May 24.

These youngsters will be singing High School Musical songs such as "Breaking Free," "Start of Something New," and "We're All In This Together," along with Kevin Concepcion, Jackie dos Santos, Athena Tibi, and Janeena Chan. Sam Concepcion, who has been chosen to sing the theme song for Kung Fu Panda in the Philippines, will also sing Troy's solo, "Get Your Head in the Game."

"We'll just be playing ourselves in this concert, so that means it won't be solely High School Musical. I'm even singing songs from my own album," Sam said. His self-titled debut album is released by Universal Records.

Richard P. Burgos, EK's vice president for marketing, said that Enchanting Teens Musical, is part of the amusement park's special offering for young adults and families as it celebrates its 13th anniversary.

Sam has been praised for being a very charming Troy Bolton, and the chemistry between him and Cheska, who has recently signed with Viva for her own album, is pretty evident. PJ has also earned rave reviews after his stint as Ryan in High School Musical, most especially as Matthew in the recently concluded run of Repertory Philippines' Altar Boyz. PJ will also be playing the role of Shang in Repertory's Mulan Jr. in August.

Enchanting Teens Musical promises a great entertainment fare for adults and children alike, complete with live entertainment, catchy love songs, and interactive gimmicks from the cast. Aside from this two-weekend concert, the theme park will also introduce 12-year-old Aria Clemente as a new storyteller for EK and will hold a Flores de Mayo on May 31.


Enchanted Kingdom is located at San Lorenzo South, City of Santa Rosa, Laguna. It is open from Monday to Friday, 2 to 10 p.m., and on Saturdays to Sundays from 10 a.m. to 10 p.m.