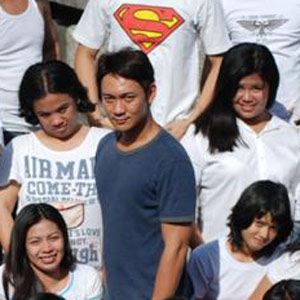 Roeder Camañag (middle, in blue shirt) is the director of Gantimpala Theater's Blue Jeans, which will be staged at the Rizal Park on May 24.

Gantimpala Theater celebrates its 31st anniversary in Philippine theater and invites the public to two special engagements—the staging of Blue Jeans, the recital production of the Acting in Musical Theater for Teens, Young Adults Batch 2008, on May 24, and the one-day audition for the company's 31st season on May 26.

Blue Jeans is a musical play that will present the forthcoming reunion of the Manila Symphony Glee Club. The story begins with fast rising musical composer Glen (Glen Dacumos) and his loving wife Kay (Kay Rivera). They visit their alma mater and pay tribute to former teacher and glee club director Professor Atienza (Jayson Alexis Atienza) who is due for retirement.

As Glen walks through the familiar halls of his former campus, he reminisces about the good old days with much fondness and the friends that made his high school life more memorable.

The play will feature some of the most popular tunes during the decade of the '80s. Roeder Camañag is the director of Blue Jeans; musical director is Onyl Torres. The performance is slated on May 24, 7 p.m. at the Open Air Auditorium in Rizal Park, Manila.

Artistic Director Tony Espejo announces that on May 26, from 2 p.m. until 8 p.m., Gantimpala Theater will signal the start of its 31st season with a one-day-only audition, which will also be held at the Open Air Auditorium.

The audition is open to all professional and non-professional actors, male and female, ages 18-45, with pleasing personality. Those who would like to audition are requested to bring a short profile and two photographs—closeup and full body.

Mr. Espejo extends his warm invitation: "We hope that you join us as we celebrate our 31st season. Let us enjoy, learn and experience the magic of Philippine theater."