THEATER REVIEW: Singin' in the Rain 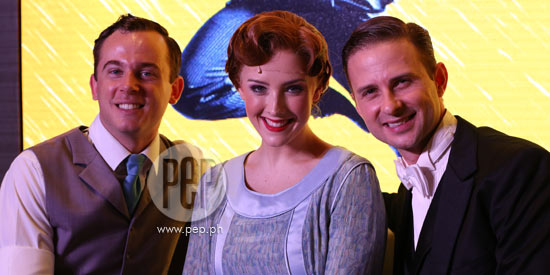 Singin' in the Rain has been extended until September 13, 2015 at The Theatre, Solaire.

By coincidence, the Manila debut of the musical Singin’ in the Rain happened during typhoon Ineng’s descent upon Metro Manila. Indeed, the rains and thunderstorms outside set the mood.

Set toward the end of the roaring 1920s when silent movies were about to be phased out and sound was the new technology of the day, the musical is a very close adaptation of the film starring Gene Kelly.

Most audiences today may only know the title track from various pop culture sources but the original 1952 movie, Singin’ in the Rain, is a classic that is considered one of the finest Hollywood musical films ever made.

In the theater version currently being staged in Manila, viewers will get to see how stars made the transition from silent movies to the "talkies."

However, their careers are threatened with the introduction of sound, especially since Lamont’s shrill and irrirating voice leaves much to be desired. 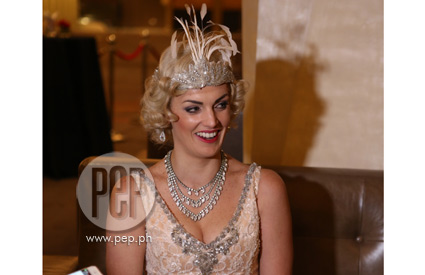 Cosmo Brown is Lockwood’s best friend and sidekick, who often provides comic moments in the play.

Kathy Selden is Lockwood’s love interest who happens to be a talented but undiscovered singer and actress.

Singin' in the Rain can be considered "a movie within a play" since the lead stars, Lockwood and Lamont, are doing their first "talkie" titled The Dancing Cavalier.

Lamont has a shrill voice that will most likely scare moviegoers away.

For this reason, Lockwood, Brown, and Selden contrive to save the movie by dubbing over Lamont’s voice.

In the grand tradition of ensemble dancing and singing, the musical is well-choreographed, led by Duane Alexander whose smooth moves across the stage are matched by his co-stars, most notably Bethany Dickson as his love interest Kathy Selden and Steven van Wyck as funnyman Cosmo Brown.

They do a range of dances, from jazz to tap to what many of us refer to as ballroom dancing.

It is tempting to do a direct comparison of the translation from screen to stage, but I will not do that. The stage musical has its own merits.

Among the lead characters, it seems that van Wyck has the most exhausting role, as he not only sings and dances, but engages in a lot of physical comedy, most notably in the “Make ‘Em Laugh” sequence. He toes the line, but never gets into the territory of slapstick.

Lead actor Duane Alexander essays the role effortlessly, acting like the perfect leading man, down to his Golden Boy good looks. He captures hearts, especially when he performs "Singin' in the Rain," dominating the stage as he skips, hops, jumps, and yes, sings alone in the rain.

He lacks a certain spunk, as van Wyck shows—but hey, it was the same in the film, where Brown had to be more of the entertaining, walking punchline. Apologies for the comparison to the movie.

Bethany Dickson’s voice is clear and even. She reaches her high notes effortlessly. She also keeps in step with the two leading men, who glide across the stage. She and Alexander also have convincing romanctic moments onstage.

Kudos to the cast who, during opening night, handle a technical glitch with grace. In the scene after the intermission, the video projected onstage would not start—but the actors simply stayed onstage, in character, then casually walked offstage before the announcement came that there was a technical difficulty that was eventually solved.

The live orchestra is a wonderful element, as the sounds of the different instruments gave the musical more depth and texture.

The sets are very well-executed, not just with the fantastic rain onstage (that is not entirely new to Manila audiences, one will note), but also with various neon lights and larger-than-life elements. Again, the choreography and music are excellent; as are the colorful costumes.

The show has a long running time—three hours with an intermission. Now, the biggest selling point of the musical has been how it rains onstage. The first time it happens, the audience claps enthusiastically. The production provides ponchos for audience members seated near the stage who might get splashed.

All the sequences involving the rain onstage sweep the audience away. How can you not sing or hum along? These are easily highlights, but not the only ones.

The big reveal toward the end, with Kathy Selden running into the audience, is also another memorable moment. So is the abovementioned “Make ‘Em Laugh” and the love story between Selden and Don Lockwood.

All these moments and more could very well encourage viewers to catch the Manila run and see this fun-filled musical for themselves.

Singin' in the Rain is being stageduntil September 13, 2015 at The Theatre, Solaire.


Interested parties may call Ticketworld at Tel No. 891-9999 or visit TicketWorld Online.