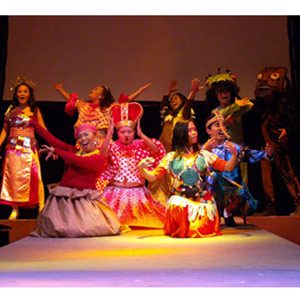 Christine Bellen's Mga Kuwento ni Lola Basyang is one of the five plays that comprise the 41st theater season of the Philippine Educational Theater Association.

Opening the season in July, Soxie Topacio directs Nic Tiongson's Noli at Fili Dekada 2000 (Dos Mil). The play is set in a small town in Quezon province where the small-town politics and social mores become the backdrop of Jose Rizal's novels. Performances are slated for July 18 to August 24, Fridays to Sundays at 10 am and 3 pm.

Tosca (August 29 and 30, at 2:30 pm and 7:30 pm) is an adaptation of Italian composer Giacomo Puccini's classic opera piece. PETA sets its interpretation during the Japanese occupation and Tosca becomes the battleground of Japanese imperialism, patriotic love and selfish greed.

Christine Bellen's Mga Kuwento ni Lola Basyang and Batang Rizal are back to back presentations of the Children's Theater productions for September to October.

Batang Rizal revisits the notions of heroism and love of country from the point of view of a child. Shows will be on September 19 to October 12, 2008, Fridays to Sundays at 10 am and 3 pm.

Saan Ba Tayo Ihahatid ng Disyembre? is the featured play from November 14 to December 7, with Friday performances at 2:30 pm and 7:30 pm, and Saturday and Sunday performances at 10 am and 3 pm. The third of Tony Perez's trilogy on friendship, love and compassion, the play directed by Nonon Padilla is about the unbreakable love and bonding between best friends and among family members, despite complications of betrayal, jealousy and anger.

The season ends with Adapting the European Masters. The festival will conclude a 10-month project involving at least forty local artists composed of writers, directors and actors who are studying European playwrights. Shows are scheduled from February 6 to March 15, 2009, on Fridays at 2:30 pm and Saturdays and Sundays at 10 am and 3 pm.

Season subscription is available for only PhP1,000. Each subscriber will be entitled to one (1) entry pass to all productions at the Theater Center plus privileges including discounts for up to two (2) companions, regular mail or e-mail updates on the latest happenings in PETA, a subscriber ID and acknowledgment in the souvenir program of all productions.

For more details, contact the PETA Marketing and Public Relations office at The PETA Theater Center, 5 Eymard Drive, New Manila, QC with telephone numbers 4100821 or 7256244, or email petampro@yahoo.com. Schedules may change without prior notice.