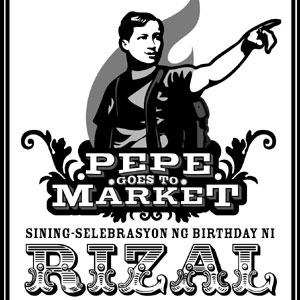 In celebration of the 147th birthday of the country's national hero, Dr. Jose Rizal, various activities will be held in his honor. The event, Pepe Goes to Market: Sining Selebrasyon ng birthday ni Jose "Pepe" Rizal, will feature the country's most prominent artists in dance, music, theater, film, and the visual arts. These free shows organized by the Cultural Center of the Philippines will take place at the Market! Market! Mall, Bonifacio Global City from June 19 to 21 (Thursday - Saturday).

Highlights of the festival include a special opening program and the book launch of Corruptionary, a dictionary of terms related to the issue of corruption. The public can listen to choral concerts by the Philippine Madrigal Singers' Choral Alliance and some government choirs; dance performances by Transitopia, Ballet Manila, Kabataang ROFG, among others; and a one-hour rock band concert to be performed by popular rock bands from the RockEd Alliance to be held at the Activity Center of Market! Market!

There will also be film screenings of Eddie Romero's Noli Me Tangere; Marilou Diaz Abaya's Rizal by GMA Films, and the documentary films of Ditsi Carolino titled Riles and Bunso to be shown at the Cinema 6. For theater aficionados, theater groups such as Tanghalang Pilipino, Philippine Educational Theater Association (PETA), Barasoain Kalinangan Foundation Inc., Gantimpala Theater Foundation, and the Philippine High School for the Arts will showcase excerpts from their musical theater productions.

An interactive exhibit will also be mounted by the artists of Tutok Karapatan. Handmade objects from music CDs, bric-a-brac, souvenirs and other arts and crafts will be on display for sale at the artists' tiangge. Leading opinion makers will lead discussions after selected performances, film screenings and forums.

To cap the three-day festival, there will be a grand concert with a 500-strong choir together with the Philippine Philharmonic Orchestra (PPO) and some of the country's top vocalists like Isay Alvarez, Bayang Barrios, Lolita Carbon, May Bayot, Joey Ayala, Noel Cabangon, among other performers. The Philippine All Stars will perform a special hip-hop number to the tune of "Ipanalo Ang Totoo" by Fr. Albert Alejo. Dramatic readings of Rizal's Mi Ultimo Adios will be presented by leading TV/film/stage actors who have portrayed Rizal in the past such as Ricky Davao, Joel Torre, Tommy Abuel and Pen Medina. TV/stage actor Gary Lim will be the festival's contemporary "Pepe." The Grand Finale will be the singing of the theme song of the Festival entitled "Bayang May Dangal," by Fr. Albert Alejo and Fr. Manoling Francisco, SJ.

The entire three-day festival is open and free to the public.

The event is presented by the Artists Welfare Project Inc., (AWPI) and the People's Assembly for Genuine Alternatives Against Social Apathy (PAGASA), with the support from the Cultural Center of the Philippines (CCP), the National Commission for Culture and the Arts (NCCA), and the Station Square East Commercial Corporation (SSECC).