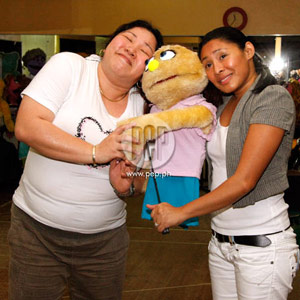 The final run of Avenue Q in Manila will be staged from June 13-22 at the Carlos P. Romulo Auditorium, RCBC Plaza, Makati City. Carla Guevara-Laforteza (right) replaces Rachel Alejandro in playing a puppeteer to Kate Monster and Lucy T. Slut. In this scene, she is joined by Frenchie Dy (left).


A lot of people thought that the December 2007 run of Avenue Q would be the last time that theatergoers would be able to hear the classic line "there's a fine, fine line between love, and a waste of your time."


But Atlantis Productions was able to close a deal in Singapore, allowing the performers to perform at the Esplanade Theatre from October 31 to November 16. This prompted directors Bobby Garcia and Chari Arespacochaga to organize another run for Avenue Q just to make sure that everyone was still in top form when they perform in front of an international audience.

During the June 2 rehearsals of Avenue Q in Makati City, Bobby explains to PEP (Philippine Entertainment Portal) why they decided to restage the play from June 13-22 at the Carlos P. Romulo Auditorium, RCBC Plaza, Makati City.

"The only reason why we did this run, we weren't going to do this run now but then the Singapore thing happened so we figured we'd do one more run. Because by the time the Singapore thing comes, these guys won't have performed for a long time. So in order to become fresh again and prepare these guys for Singapore, we decided to do another run."

The Singaporean government has a reputation for being conservative and in fact, all plays that will be staged in the country have to receive approval from the National Arts Council. "In Singapore, you have to submit the script to a government agency that reads the script. Apparently, the script was sent to them and they were laughing at it," narrates Bobby. He even adds jokingly, "I hope they [the cast] won't get jailed!"

One major difference of this farewell run is the fact that Rachel Alejandro has been replaced by Carla Guevara-Laforteza while Thea Tadiar is the replacement of Teenee Chan, who handles the puppets of Mrs. Thistletwat and others. Bobby explains that scheduling problems caused Rachel to back out from the third Manila run.

He points out the reasons why they chose Carla to handle the puppets of Kate Monster and Lucy T. Slut. "Carla is one of our country's most versatile theater actress. She has done so many shows and when you do this show, you need someone dependable. It looks easy when you see it but you need someone who is really O.C. [obsessive-compulsive] and on top of themselves. For this show, you need to hire people who are very dependable and both Thea and Carla are."

"Having new people in the cast allows the show to evolve and take on a different shape," says Bobby regarding the new additions. Carla was cast as an understudy for the role of Kim in the London production of Miss Saigon from 1995 to 1997. She was also tapped to play the lead role in Repertory Philippines' Song and Dance in 2007.


Avenue Q is about a puppet named Princeton (manned by Felix Rivera) who has just graduated with a bachelor's degree in English. He gets to meet the fabulously furry people of Avenue Q, an apartment being run by Gary Coleman (played by Aiza Seguerra). The young man is then torn between the sweet girl Kate Monster and the seductive Lucy T. Slut (both played by Carla Guevara).