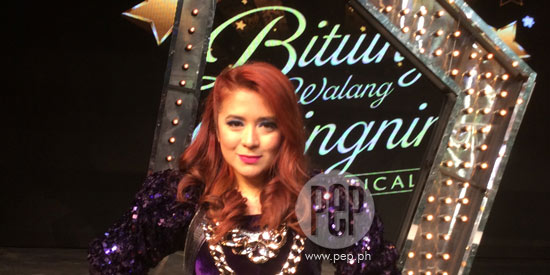 Antoinette Taus (in photo) is one of the alternates for the role of the kontrabida Lavinia Arguelles in Bituing Walang Ningning: The Musical. It will be re-staged at Resorts World Manila from October 8, 2015 to January 2016.

Though its first run just concluded in July 2015, Bituing Walang Ningning: The Musical can be seen once again—for those who missed it or would like to see it again.

Monica Cuenco returns as Dorina Pineda, the character immortalized by Sharon Cuneta in the movie. This is the movie that gave us such beautiful songs as “Bituing Walang Ningning” and “Pangarap na Bituin,” and that iconic confrontation scene involving spiteful lines and a beverage being thrown in a star’s face.

Originally told over a serialized comic strip by fictionist Nerissa Cabral, it was made into a top-grossing movie in 1985, then a hit TV series starring Sarah Geronimo in 2006.

New cast members will join the ensemble for this re-run. Antoinette Taus will play alternate to Cris Villonco’s Lavinia Arguelles, that superstar threatened by Dorina.

STEPPING INTO THEIR SHOES. During a press preview, Antoinette said she did not let the movie nor the TV series influence her performance. Instead, she studied the character as written in the musical. “I’m trying to keep it raw. I am trying to be Lavinia: a little bit evil and fight for what she wants.”

For his part, Epy Quizon says, he appreciates the chance to be part of a stage production again. He thinks such an exercise brings him back to the discipline of acting. “Hearing a live audience is refreshing for the soul,” he says.

DIFFERENT RUN. Since it plays on the Filipino love for music and good drama, “the confrontation scenes are so personal and delivered at an intimate level,” says Director Freddie Santos.

He also points out that although it is the same musical, it is slightly different from the first run. First of all, because there are three new songs, one of them is Ronnie Liang’s “Gusto Kita.”

Fans may want to watch it again: “It is much more entertaining that what they saw before,” he promised.

The musical is also an homage to quintessential hitmaker, Willy Cruz, with musical score by the Manila Philharmonic Orchestra under the baton of Maestro Rodel Colmenar.

Bituing Walang Ningning: The Musical will be re-staged at Newport Performing Arts Theater, Resorts World Manila from October 8, 2015 until January 2016.


(For tickets to Bituing Walang Ningning, call Ticketworld at Tel. No. 891-9999 or visit Ticketworld Online)