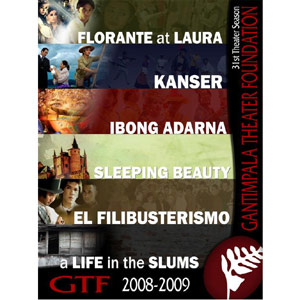 Gantimpala Theater kicks off its 31st season beginning with Florante at Laura, which will be performed starting August 1.


Tony Espejo, founder-artistic director of Gantimpala Theater, is ecstatic that his baby, formerly known as Bulwagang Gantimpala, is now a full-grown adult at thirty-one. He declares, "We must be doing something good to have last this long and I owe this to our audiences, of course, and to men and women who continue to make the company pulsating with energy and dynamism.

"Our decade reign at the CCP [Cultural Center of the Philippines] as Bulwagang Gantimpala definitely enriched Philippine dramaturgy," Espejo points out. "Books were being published featuring the plays we staged-and these made easier access to these plays. So that all of a sudden, you have an interest in Filipino plays and professional and amateur drama groups were staging them. The experimental box that was Bulwagang Gantimpala offered a fresh look at staging plays: one didn't have to have a thousand-seater [venue] to stage a production. One needed imagination, the sense of intimacy created a new style of truthful acting and new wave of performers emerged together with a super efficient staff. There was no room for mistakes at the Bulwagan."


When asked why they left the CCP, Espejo narrates, "There was no choice but to leave CCP with the change of administration during the time of EDSA 1. We had negotiations with the management then but they decided not to renew our contract as one of its in-house dramatic arts companies. The unwritten rule was to erase all projects that have a Marcos stamp and since we were arguably one of the more positive agenda during the Marcos era, we have to be obliterated."


In consultation with some of senior members of Gantimpala, Espejo accepted the invitation of the late society doyenne Conchita Sunico to make Manila Metropolitan Theater its home. At the Manila MET, he introduced the staging of the Four Classics.

"We had a fabulous reception," remembers Espejo. "So, I thought why not transfer these productions at the Main Theater. We were doing very well at the Dalubdulaan but somehow, the limited seats will not keep us alive so I said we would take the gamble. We either pack the 1,500 seater MET Main Theater to earn money and keep us going or go bust. Thus, Florante at Laura was born and as they say, the rest is theater history."

CLASSIC CHOICES. Espejo, of course is very much aware that some quarters think that Gantimpala Theater have milked the theater industry with his productions of the Four Classics (Florante at Laura, Noli Me Tangere, El Filibusterismo and Ibong Adarna).

He counters this by saying, "Without the Four Classics, we would have folded up a long time ago. Beyond the practical aspect of finances, we have trained a big number of actors and production staff by their involvement in the classics. These plays are epic in nature and require many actors performing several roles. The young actors have used these plays as a training ground and the same can be said with the production staff. The historical nature of these productions demands research and training of in period plays so it requires a well-trained set of production staff which I am very proud to say that up to this day, the production staff of Gantimpala are considered as the best in the industry today."

"I often wonder why doing the Four Classics, as part of one's artistic repertoire, surprise some people. I am just following the standard practice in the field of music and ballet. The Nut Cracker, Don Quixote or Giselle are necessary as part of the repertoire of any decent classical ballet company. These titles mark your cornerstone in your development as ballet companies. Also, Handel's Messiah, doing Beethoven or Mozart concerts are staple repertoire of any decent orchestra. Now, what I am trying to present is that Noli, Fili, Florante and Ibong Adarna must be staple repertoire of any decent, aspiring or professional theater company in the country precisely because our dramaturgy stems from these classics," he continues.

He adds, "Without sounding boastful, I know that this season, PETA, Dulaang UP, and Tanghalang Pilipino are incorporating the Noli and Fili in their lineup of plays and though they might tweak the story or present their versions of these novels, it cannot be denied that they are obviously realizing the importance of these classics. "

31ST ANNIVERSARY. What can audiences look forward to PETA's 31st year? "Our season once more focuses on the educational role that live theater provides to our student audiences and the general public. Our performances bring flesh and blood to the famous characters of the stories we dramatize, making them more believable and accessible to the audience. We also emphasize the values inherent in the stories and underscore such virtues as love for country, caring for environment and honesty, truth and justice," answers Espejo.

"Still, the Four Classics come alive on the Gantimpala stage. Each play continues to enlighten our market and speaks to today's audiences with a message that we must be proud of our cultural heritage and that all the truth and lessons they present are still relevant."

He continues, "We are also producing Sleeping Beauty, J. Dennis Teodosio translated this Grimm's Brother tale into Filipino and it will tell us of the life story of Aurora and the curse thrown upon her by the evil fairy—on Aurora's eighteenth birthday, she would prick her finger and die.


"We conclude our season with A Life in the Slums, by National Artist for Theater Rolando Tinio, first prizewinner, English division, 1975 Don Carlos Palanca Memorial Awards. It revolves around the lives of two sisters: Millie, happy and content in the slums and Annie, who lives a miserable, high society life. They meet, discuss the wonders and horrors of their existence and in the end, reverse their societal standing. "

"Aside from all these, we have touring productions as well namely Bonifacio Ilagan's Katipunan: Mga Anak ng Bayan; Wilfrido Ma. Guerrero's Forever and Teodosio's Ang Pagong at ang Matsing."