"West Side Story" all set for its September run 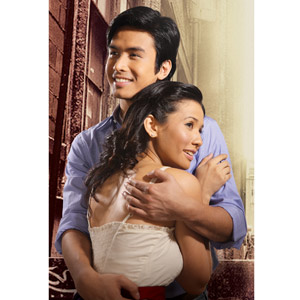 Just like their characters in West Side Story, Christian Bautista and Karylle belong to rival worlds: The balladeer is a mainstay of ABS-CBN's ASAP while the daughter of Zsa Zsa Padilla is a host of GMA-7's SOP. Watch how Christian and Karylle play Tony and Maria in the Manila run of West Side Story this September.

West Side Story, STAGES' major musical offering in 2008, is all set to go on stage with an assembly of a strong cast headlined by ASAP host Christian Bautista, SOP host Karylle, and London West End's Joanna Ampil. Audiences will hear songs performed by a live orchestra with Gerard Salonga as musical director; and a first-rate artistic team with Audie Gemora as executive producer, and Menchu Lauchengco-Yulo as director.

After rigid auditions that took two months, whose mix of aspirants emerged not only from the Philippines but also from other countries like Singapore, Australia, the United States, and the United Kingdom, STAGES has finally completed its cast of singers and dancers.


Balladeer Christian Bautista is given the role of Tony, the tall and handsome New Yorker who imagines a world where he can freely love the woman of his dreams-regardless of her ethnicity. Singer and actress Karylle could match Natalie Wood's film version of Maria. She is young and beautiful. She sings her songs with utmost conviction.


Meanwhile, the Philippines will get the rare chance to watch Joanna Ampil in her first musical theater assignment in Manila after sixteen years playing lead roles in London. Joanna has agreed to share the role of Maria with Karylle because she has long wanted to perform for her kababayans who cannot easily afford to go to London to watch her in a musical. Local audiences have to see why Joanna is a favorite of British producer Cameron Mackintosh. Joanna, at one time, was even handpicked by Sir Andrew Lloyd Webber to play Mary Magdalene in Jesus Christ Superstar.


Gian Magdangal as Riff returns to the theater after a three-year hiatus. He is seen in the reality show Philippine Idol on ABC-5, and SOP Rules on GMA-7.


Another world-class import, Filipino Australian Rowena Vilar, who played Kim, Gigi, and Ellen in the recent Australian tour of Miss Saigon, joins the cast of this Tony Award-winning 1989 Broadway play. Highly recommended by Leo Valdez, who played The Engineer in Miss Saigon, Rowena will be flying in to share the role of the feisty Anita with local theater and pop artist Pam G.


Since West Side Story is primarily a dance musical, the artistic team had to call professional dance groups, and handpick very strong dancers for the supporting cast. Rest assured that the show would be a night of great dancing. Jazz choreographer James Laforteza is tasked to reconstruct Jerome Robbins' original choreography in the Broadway production.


It is interesting to note that musical director Gerard Salonga has been longing to do West Side Story. Lea Salonga's husband Robert Chien, who now manages the FILharmoniKA orchestra under Ambient Media, went the extra mile to make it possible for them to play for the production.


Manila's theater-going public has been looking forward to the re-staging of this classic Broadway musical, including a growing number of fundraising groups, and block buyers.


"We initially opened up sixteen shows to fundraising groups, and block buyers. We ended up opening four more shows to accommodate the demand coming from these groups, which is interestingly a pretty good mix of both Filipino and foreign investors, including a Swiss block buyer," said Mr. Gemora.


West Side Story was first staged in Manila back in 1982 with Audie as Riff and Menchu as Maria. This Manila re-staging will precede a Broadway revival in 2009. This Broadway musical about two rival gangs living during the late 1950s in New York is considered one of the best musicals of all time with music by Leonard Bernstein, and lyrics by Stephen Sondheim. It is a beautiful, dramatic dance musical with many show-stopping numbers and immortal songs like "Somewhere," "Tonight," "One Hand One Heart," "America," and "Something's Coming."


STAGES' production of West Side Story is presented through special arrangement with Music Theatre International (MTI) in New York.