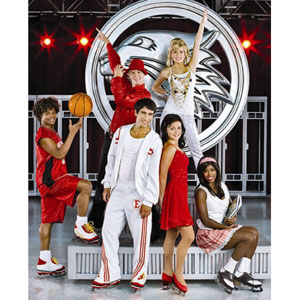 High School Musical: The Ice Tour will be presented at the Araneta Coliseum from July 11-20, 2008.


After thrilling millions of fans across America and Europe for the past year, High School Musical: The Ice Tour is set to take Asia by storm as it kicks off in Manila this July.

The ice tour, which fuses songs, dance, and team-spirited fun from the original Emmy Award-winning Disney movie, will feature music from the High School Musical soundtrack in two acts—the first act focusing on the first film, while the second act covers the second film in two hours.

"We're excited to bring Disney's High School Musical: The Ice Tour to everyone around the world because this story is about kids being true to themselves," said Tony Award-winning producer Kenneth Feld.

High School Musical revolves around the students of East High, particularly Gabriella Montez, a smart girl labeled as a nerd in her former school, and Troy Bolton, the school's basketball star and heartthrob. After teaming up in a karaoke contest in New Year's Eve party, they become friends and eventually, learn that they are classmates in East High.

Troy and Gabriella audition for their school's production of Juliet and Romeo, but find themselves at odds with twins Sharpay and Ryan Evans, who always get the lead roles in the school plays. Even the duo's friends advice Troy and Gabriella to "stick to the status quo" and leave the leads to the Evans, who would do anything to stop the nerd and the jock from stealing their thunder.

A distinguished set of talented Olympic skaters headline the cast of this ice show. "We chose skaters who could really relate to the characters, so that the performances would be really authentic, raw, and energetic," said Eric Gravelle Regional Marketing Director for South East Asia and India of Feld Entertainment.

"Just like the kids in the movie, the skaters we have cast in the show know all about reaching for themselves," said Kenneth Feld.