Joanna Ampil shifts from West End to West Side 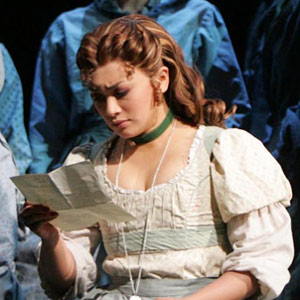 After playing Fantine in West End's Les Miserables, Joanna Ampil will now be seen portraying the role of Maria in STAGES' production of West Side Story. It will be staged at the Meralco Theater from September to October.


London-based thespian Joanna Ampil is finally coming home to the Philippines to do her very first musical theater project in Manila after 16 years of being a West End star. Joanna is playing the role of Maria in the production of West Side Story to be produced by STAGES, and directed by Menchu Lauchengco-Yulo.

Joanna has long wanted to perform in her own country but never had the chance until she heard of the casting call for West Side Story. She was then busy playing Fantine in West End's Les Miserables. So she emailed STAGES' president Audie Gemora, and asked if she could send in her audition materials instead. Without thinking twice, Audie said yes.

Thanks to the advent of technology, Joanna was able to send in a digital audio track of "Think of Me" from the Phantom of the Opera where she sang the soprano role of Christine. After listening to Joanna, the judges were all blown away, and agreed that she would get the part of Maria. The judges included Audie, Jaime del Mundo, and Menchu Lauchengco-Yulo, who has starred as Maria in the past.

When Joanna was offered the role, Audie reminded her that STAGES could never match her West End rates, but Joanna simply said that it's her dream to work with Audie, hence financial issues could be put aside. Joanna recalls the day when she saw Audie in the production of Joseph the Dreamer at the Meralco Theater. "That was a turning point for me," Joanna shares. "I remember vividly how I told a friend about wanting to get into theater after seeing the show. That was way back in 1992, and little did I know that 16 years later, I would be working with Audie in the same theater where I realized my dream."

Joanna has always dreamed of becoming a performer. She has no formal drama training but when she was younger, she was always part of the school programs, which gave her the invaluable experience of performing before a crowd. That's why when she was chosen to play an alternate for the role of Kim in West End's Miss Saigon in 1993, there was no stopping her.

After her powerful performance in Miss Saigon, she was offered one key role after another. She has also played Mimi in Rent, and Eponine in Les Miserables, among others. Joanna was even handpicked by Sir Andrew Lloyd Webber to play Mary Magdalene in Jesus Christ Superstar, which was very memorable for her. "It was tough to get to know her character," she says. "The pressure was immense since we were opening the show. It was a total change of environment for me and it was my first time to work with Mr. Webber."

TELLING MARIA'S STORY. However, Joanna was quite content already after playing Kim. "The roles I played after that were just bonuses," she mentions. "But then, Maria came along and I dreamed again, I just had to tell her story."

The role of Maria is quite far from Joanna in real life. But she is taking this as a challenge in the same way that she has handled all her other roles. "To be honest, my life is not that similar to hers," Joanna discloses. "But I can draw out certain emotions from my experiences, which I can then use for the role. It's just a matter of finding the 'truth' of Maria within me."

On the other hand, her most recent role as Fantine in Les Miserables is the most challenging for her since this is her first mature role. "I cannot be more different than the character," she expresses. "Since I was the first Asian to play the part in London, the creative team of Les Miserables was a bit challenged with how they were going to create my look. For instance, the wig color, etc. It also took a while before I could relate to her fully. It was daunting in a way that my experiences, which I eventually used to play the role were too painful to delve into."

At the moment, Joanna wrapped up playing Fantine. She is now taking a short break before she comes to Manila for the show. She wants to start with a fresh mind, and make her first Manila performance a memorable one for her. In fact, for every new production that she does, she makes sure that she is well prepared. She does a lot of different exercises to increase her stamina, and takes classical lessons with her singing coach, Gillyanne. "Not long ago, we went through the song, 'I Have A Love,'" Joanna recollects, "Gillyanne and I cried. How beautiful is this song let alone the whole score? The geniuses of Bernstein and Sondheim are a perfect combination." It is no wonder that one London critic cites Joanna as a major star in West End.

Indeed, Joanna has been showered with a lot of blessings. Her singing prowess has brought her to places. Not only has she conquered the theater stage, but also the concert scene in London. And for Joanna, each offers a different challenge for her. "On stage, I become a different person and I get to experience a different life," she describes. "Whereas in concerts, I feel totally naked, not literally, as I am being myself. It's always terrifying to do that. Naturally, a feeling of being inadequate starts to kick in as this time, there is no mask to hide behind."

TELEVISION GUESTINGS. If there is one thing though that Joanna wants to do more of, it's television work. She has appeared in just a number of TV shows. Some of which include the Mummy Autopsy Documentary (Discovery Channel), A Day in the Life of Windsor Castle (BBC), The Quest Documentary (BBC), 100 Greatest Musicals, and Broken News--Michelle Wong" (BBC). "Also, if an opportunity arises to do films," she continues, "I would feel very blessed to do that, too."

Joanna can't wait to come to Manila and start rehearsing. She feels very ecstatic and excited coming home. "Everything is so laid back and relaxed in Manila as compared to the fast-paced life in London," she explains. "Because I have been based in London for many years, I see the Philippines as a paradise, a place where I can totally be stress free."

There is a lot of pressure on Joanna right now but one thing's certain: people can expect a West End performance from her in Manila. "I cannot really predict what people expect of me," she humbly says. "I'm sure they have certain expectations from the character of Maria and I just hope I meet that along with their standards."

By the time Joanna finishes West Side Story, it will be Christmas season already. And since she has been away from her family for 16 long years, she plans to go to Vancouver and Los Angeles to spend her first Christmas with them.

West Side Story is set in Manhattan's upper West Side, and tells the love story of a Polish lad named Tony (Christian Bautista), and a Puerto Rican lass named Maria (Joanna alternating with Karylle) in a seemingly unending feud between the New Yorkers and Puerto Ricans.

PEP (Philippine Entertainment Portal) is one of the media partners of West Side Story. STAGES' production of West Side Story is presented through special arrangement with Music Theatre International (MTI) in New York.