"Florante at Laura" to be staged by Gantimpala Theater 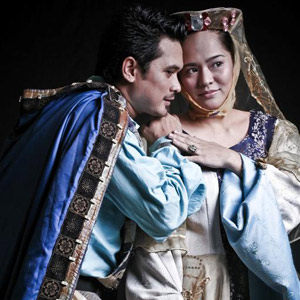 Arkin Da Silva and Nelia Aguado portray the lovers who lived at a time when Christians were battling with Muslims. They topbill the play Florante at Laura, which will be staged by Gantimpala Theater starting July 27, 2008.

Choreographed entrances, fast-paced skirmishes, an epic battle between warring Christians and Moors, and a romance that blooms, blossoms and endures despite the uncertainty of times—all these and more comes alive on stage as Gantimpala Theater ushers the beginning of its 31st year with Francisco Balagtas' Florante at Laura, re-created as a modern day komedya.


Florante at Laura is a Filipino awit, a love story that happens in the kingdom of Albania. Florante is the son of Duke Briseo, betrothed to Laura, daughter of Haring Linceo. This Tagalog epic describes the many hardships that the relationship of the two lovers faced and how their love withstood the onslaught of tragedies. It also presents their unusual kinship with Flerida and Aladin, who are of Moorish lineage.


This awit is dedicated to Balagtas' sweetheart Maria Asuncion Rivera or Selya, who married Balagtas' rival Mario Capule. Despite being a love story, Florante at Laura had underlying nationalistic tones that escaped the eyes of the Spanish censorship permitting it to be shown in theatres and plays.


Gantimpala Theater reincarnates the classic awit as a komedya, considered as an authentic Filipino theater form.


Tony Espejo, Gantimpala's artistic director says, "Our season once more focuses on the educational role that live theater provides to our student audiences and the general public. Our performances bring flesh and blood to the famous characters of the stories we dramatize, making them more believable and accessible to the audience. We also emphasize the values inherent in the stories and underscore such virtues as love for country, caring for environment and honesty, truth and justice. Watching Gantimpala's Florante at Laura is a lesson in Philippine literature and theater history. I guarantee our audiences that this historical dramatization of the exploits of Florante and his romance with Laura will make them appreciate our country's rich literary heritage."


Florante at Laura is fully supported by the National Parks Development Committee (NPDC).