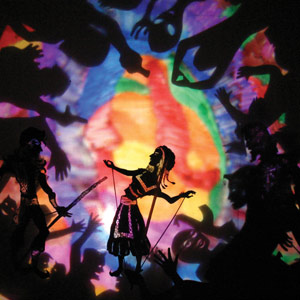 Get to view six Pinoy puppet plays in the three-day festival dubbed as the first Philippine Puppetry Festival. From August 13- 15, groups of puppeteers will showcase their art form at the Cultural Center of the Philippines.

The answer: It's the title of a unique Filipino theater event that brings together six puppetry forms—black theater, ventriloquism, marionette, and rod, hand, and shadow puppetry—in one festival.

The Black Theater of Manila (BTM) and ventriloquist Ony Carcamo perform on August 13. BTM is an information dissemination arm of the Philippine Information Agency composed of "black theater" puppeteers trained in the USA, Japan, Indonesia, and Czechoslovakia. The group, established in 1978, experiments on the use of popular, folk, and low-cost media in the development communication and develops information materials for kid and adult audiences. Ony Carcamo, a premier ventriloquist in the country, regularly tours the schools and adult comedy venues to help re-introduce the ancient "voice-throwing" art form to local viewers.

On August 14, puppet plays of Anino Shadowplay Collective (ANINO) and Roppets Edutainment will be showcased to the public. ANINO is a group of multimedia artists dedicated to popularizing the art of shadow play. Since 1992 it has been performing shadow narratives on Philippine traditional art and literature, political history and contemporary culture. Roppets has been using hand puppetry to educate and entertain since 1987. An honoree of the prestigious Who's Who in the Philippines and the National Consumer Council, it conducts field trips, school and mall tours, caters to birthday parties and other social events around the country, and maintains branches in Manila, Pampanga, Cebu, Negros, and Davao.

Teatrong Mulat ng Pilipinas and Tali Galaw close the event on August 15. Teatrong Mulat ng Pilipinas (MULAT) was founded in 1977 by playwright-director Amelia Lapeña-Bonifacio, a University Professor Emeritus of the University of the Philippines. It has been inspired by Asian puppet techniques such as the Indonesian wayang golek and wayang kulit and the Japanese bunraku. Tali Galaw, established in 1995, is the first and only Filipino marionette group conducting regular performances to promote and professionalize the art of marionette puppetry in the country. Its plays promote Philippine history, culture, folktale, environmental protection, and good moral values.