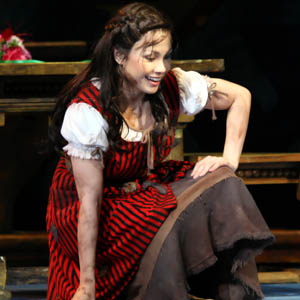 Lea Salonga said in one interview that one of the hardest places to perform in is in your own country because of the high expectations set by her own countrymen. Lea met all the expectations, as shown by the audience's standing ovation last night.

Once the musical play started, no one was allowed to enter the venue and everyone had to wait after almost 20 minutes na mag-run ito. It was one of the most celebrity-filled nights dahil sa presence ng ilang showbiz personalities and famous faces in society.

The Cinderella musical is based on a TV special that starred Julie Andrews in the title role and became one of the most-watched TV specials of all time. Lea worked with Julie in a 1992 recording of another Rodgers and Hammerstein musical, The King and I.

The musical is directed by Bobby Garcia, the same director of Disney's Beauty and The Beast and Broadway Asia Entertainment production's The King and I.

Ayon sa website ng Cinderella, the designs were created by a team led by renowned clothing designer Renato Balestra, the Italian clothing designer who has dressed some of the world's most famous women, from Hollywood royalty Elizabeth Taylor and Lauren Bacall to rich and powerful women like the Queen of Thailand, the empress of Iran, the first ladies of Egypt and the Philippines.

Sa isang interview kay Lea months before the staging of Cinderella, isa sa mahirap mag-perform ay sa sariling bansa, 'ika niya, because of the high expectations on her. Pero after last night's staging, by now ay alam na siguro ni Lea how proud Filipinos are of her by giving her a standing ovation.

Cinderella will run at CCP until August 24.