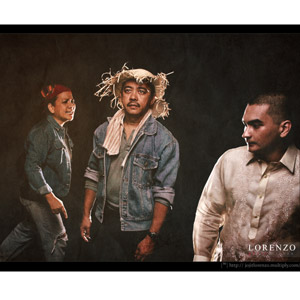 PETA went on with the staging of Noli at Fili Dos Mil (in photo) last Sunday, August 3, even though a grenade explosion caused minor damage to the PETA Theater Center. All PETA plays will continue as scheduled.


As they say in theater: the show must go on. This adage was proven by the Philippine Educational Theater Association (PETA) when they continued with the scheduled performances of their play even though a grenade was hurled at their parking lot just a few hours earlier.

Last Sunday, August 3, an explosion rocked the PETA Theater Center in New Manila, Quezon City. According to Leloi Arcete, the public relations officer of PETA, the doors of the building remain intact but the glass panels on the ground floor were shattered by the explosion that took place before dawn. The explosion also also left a five-inch wide crater on the parking lot of the building.

Right after the incident, the Quezon City Bomb Squad inspected the PETA Theater Center and declared that the building was safe. In fact, the staging of the play Noli at Fili Dos Mil (Dekada 2000) continued at 10 a.m. and 3 p.m. that same day.


All performances of PETA will continue as scheduled.


PETA sent its official statement regarding the grenade-hurling incident at PETA Theater Center:

"At about 4:55AM on Sunday, August 3, 2008, an explosion occurred in front of the PETA THEATER CENTER at No. 5 Eymard Drive, Brgy. Kristong Hari, New Manila, Quezon City. Upon hearing the explosion, the guard on duty rushed out and saw a man driving away on a motorcycle from the direction of Broadway St. towards E. Rodriguez Avenue. Because it was raining and still dark, the guard could not read the plate number of the motorcycle.

"At around 5:05AM, the Barangay Captain and tanod of Barangay Kristong Hari, who had heard the explosion, came to the Center. Upon hearing the guard's account, the Barangay Captain called Broadway Station 30 and Police Station 11, and after (10) minutes, four policemen arrived from Police Station 11. Soon after, the Quezon City Bomb Squad arrived and conducted an investigation. According to the Quezon City Bomb Squad, it was an MK2 grenade that exploded. Fortunately, no one was hurt in the incident. Only a few minor damages were inflicted on the building's façade.

"PETA acknowledges the positive and immediate response of the Barangay Kristong Hari personnel, the Quezon City Police Department and the Quezon City Bomb Squad. The PETA management is in close coordination with the Quezon City authorities to ensure public safety so that PETA can continue to serve its public with the same dedication and concern as it has shown in the past 40 years."