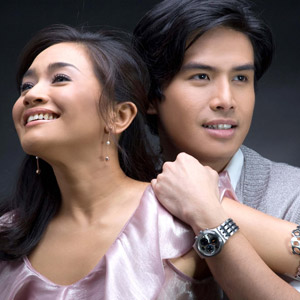 Joanna Ampil and Christian Bautista portray the tragic love story of Maria and Tony in the Philippine version of West Side Story. This Broadway play will be performed by STAGES from September 5 to October 12, 2008.


The global appeal of West Side Story, an award-winning stage and movie musical with music by Leornard Bernstein and lyrics by Stephen Sondheim, has urged Miss Saigon lead stars Joanna Ampil and Rowena Vilar to travel to the Philippines and be part of the major restaging of this Broadway play running at Meralco Theater from September 5 to October 12, 2008.

West End-based actress Joanna Ampil left the Philippines 16 years ago to star in the London and Sydney productions of Miss Saigon. In 1995, she recorded the female lead vocals in the international symphonic recording of the hit musical, which is the only official complete recording of Miss Saigon produced under the personal supervision of composer-lyricist tandem of Claude-Michel Schonberg and Alain Boublil.

In 1996, Joanna was handpicked by Sir Andrew Lloyd Webber to play Mary Magdalene in a new production of Jesus Christ Superstar at the Lyceum Theater in London. Joanna has since filled in the shoes of musical theatre's most coveted roles including Eponine in Les Miserables (2000), Fantine in Les Miserables (2003 and 2007), Sheila Franklin in Hair (2005), and Mimi in Rent (2006).

Joanna will play Maria (alternating with GMA 7 TV host and singer Karylle), opposite Christian Baustista's Tony in this STAGES production of West Side Story. This is Joanna's first major musical theater assignment in the Philippines.

Meanwhile, Australian-born Filipina Rowena Vilar has recently played the roles of Kim and Gigi in the Australian tour of Miss Saigon. She is in the same company as Leo Valdez and Lauri Cadeviva (local R&B singer Kris Lawrence's sister).

Rowena began her musical theatre career when she joined the Australian tour of jukebox musical We Will Rock You (2004-2006), which features the songs popularized by Queen. She has then moved on to be a part of the Australian Arena Tour of another jukebox musical The Boy from Oz (2006), which starred Hugh Jackman and directed by Kenny Ortega, who choreographed Disney's High School Musical franchise and Dirty Dancing.

Rowena just arrived in Manila to play the role of Anita (alternating with local theater actress Pam G). The pure-blooded Filipina has been very enthusiastic about the opportunity working with West Side Story's cast, creative, and management team.

West Side Story is an intense, dramatic dance musical with many show-stopping numbers and immortal songs like "Somewhere," "Tonight," "One Hand One Heart," "America," and "Something's Coming."

This STAGES' production of West Side Story is its third major musical after "Footloose" in 2005 and High School Musical On Stage in 2007. Menchu Lauchengco-Yulo is director; Gerard Salonga is musical director; Mio Infante is scenographer; John Batalla is lighting director; Bobbit Jacinto is sound designer; Eric Pineda is costume designer; and Audie Gemora is executive producer.

STAGES' production of West Side Story is presented through special arrangement with Music Theatre International (MTI) in New York.