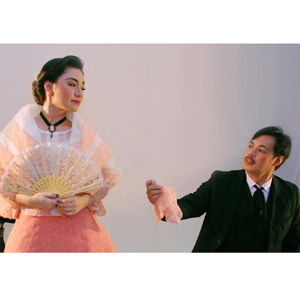 Fame Flores and Alan Paule play the lead characters Maria Clara and Crisostomo Ibarra in the restaging of Jose Rizal's novel Noli Me Tangere. This Gantimpala Theater production will be staged from August 22 to September 27, 2008.


Noli Me Tangere is Dr. Jose Rizal's expose of corrupt friars from who have made the Catholic religion as instrument for enriching and perpetuating themselves in power by seeking to mire ignorant Filipinos in fanaticism and superstition. Instead of teaching Filipinos true Christianity, according to Rizal, they control the government by opposing all progress and persecuting members of the ilustrados unless they make themselves their servile flatterers. The novel lampooned, caricatured, and exposed various elements in the colonial society.

Through the years, this work of fiction have had many incarnations and considered, as one of its most important versions is Kanser, a stage play that started in 1979. The 29-year-old Philippine theater classic comes to life anew on the Gantimpala Theater stage, penned by Jomar Fleras and under the direction of Adriana Agcaoili.

Director Agcaoili says about his interpretation of the play, "What I like about the Noli, now that I am directing it is that it allows me to discover that it was Dr. Rizal's call on the Filipino to recover his self-confidence, to appreciate his worth. It is wonderful to note how, through this play made by Jomar Fleras, we get to realize that the novel highlighted the virtues and good qualities of his unspoiled fellow citizens; the modesty and devotion of the Filipina, the hospitality of the Filipino family; the devotion of parents to their children and the children to their parents; the deep sense of gratitude, and the solid common sense of the lowly peasant."

The play is fully supported by the National Parks Development Committee (NPDC).