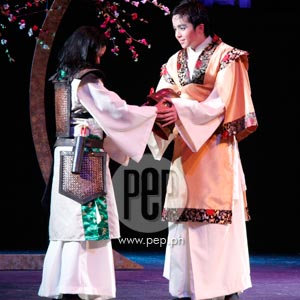 Mulan (Cara Barredo, back to camera) runs away to join the army in her father's place. When she comes back to her family's house, she is followed by Captain Chang (PJ Valerio). Watch Repertory Philippines' Mulan Jr., which is being staged until December 18, 2008.


Ten years after the release of the Walt Disney animated feature Mulan, Repertory Philippines will be staging the theatrical version of the ancient Chinese legend. Cris Villonco, Cara Barredo, and Caisa Borromeo will alternate in the role of the real-life female warrior in Mulan Jr.


PEP (Philippine Entertainment Portal) was invited to watch REP's staging of the play based on the Disney film of the same name. One of the highlights is the song "Reflections," which was performed by Lea Salonga in the animated film Mulan.

The opening number imposes upon the viewers the importance of duty and upholding the family honor. Looking down upon the mortals are the five ancestors of the Fa family. They are able to see the situation of Mulan but since they are confined to the temple, they send Mushu, a demoted dragon, to aid her in her journey.

The headstrong Mulan fails to impress the matchmaker who is tapped to pair the young girl with a suitable groom. In ancient China, women were only fit to be submissive wives to their husbands but Mulan goes against tradition by disguising herself as a man and joining the Chinese Imperial Army in place of her aging father.


Ping, who is actually Mulan in disguise, gains the favor of Captain Chang while he trains them to battle with the Huns. She shows her bravery and her intellect on the battlefield and ends up a war hero.

Repertory Philippines will be staging Mulan Jr. until December 18, 2008 at Onstage, Greenbelt 1 in Makati City.


Special showings and group sales are available at discounted rates. Call 8870710 for information about the upcoming productions, show sponsorships, and about REP itself. Tickets are also available to Ticket World (Tel. No. 891-9999).