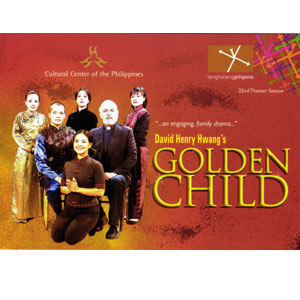 Tanghalang Pilipino's Golden Child will be staged at the Cultural Center of the Philippines Little Theater until August 31.


The comparison is unavoidable. Tanghalang Pilipino's Golden Child achieves in a couple of hours what the Chinoy-themed Mano Po series failed to accomplish in five movies. This Tony and Off-Broadway award-winning play was written by David Henry Hwang based on interviews with his Chinese grandmother.

This is not the first time that director/set designer Loy Arcenas has collaborated with David Henry Hwang (both of whom were present during the gala night last August 8 at the Cultural Center of the Philippines). Arcenas collaborated with Hwang for the New York staging of Golden Child and Face Value.

Arcenas, a Cebu-born set designer based in New York, filled the Little Theater of CCP with layers and layers of see-through curtains that billow gracefully as the characters pass. The smell of incense fills the air as the cast members pray to their ancestors. Melodic tunes and heart-pounding music are used, all building up momentum for the key scenes. This two-act play promises to be a treat for all the senses as it showcases the richness of Chinese culture.

Golden Child is the story of Eng Tieng Bin as told to Andrew Kwong (both played by Arthur Acuna, who received a special citation from the Obie Awards for his performance in The Romance of Magno Rubio in 2003).

Andrew, who lives in contemporary times, is bothered in his sleep by the spirit of his long-deceased grandmother Ahn (Tess Jamias), the daughter of Eng Tieng Bin. She insists on retelling the story of Eng Tieng Bin, a businessman who returned to Fujian, China, after three years of doing business in the Philippines.

After his exposure to Western culture—particularly Christianity, thanks to Reverend Baines (Leo Rialp)—he is set to release his family from its traditional bindings. His attempts to change his family's ways earn mixed reactions from his three wives.

Eng Tieng Bin's First Wife, the traditional Siu Yong (played by Irma Adlawan-Marasigan, who was incidentally part of two Mano Po films), is adamant against these changes. "How much change can people endure," she says in one of her confrontations with Eng Tieng Bin.

Meanwhile, Second Wife Luan (New York-based theater actress Tina Chilip) uses these changes to earn the favor of her husband. She tosses aside her Chinese heritage to embrace Western clothing and a brand new religion just to manipulate her husband.


Third Wife Eling (Liesl Batucan) is a simple-minded peasant girl who experiences conflict over her obligations as wife and daughter.

The words of Siu Yong about change resonate within the play, thanks to the vibrant Adlawan-Marasigan, who is always a joy to see onstage, on the big screen (as an indie actress), or on the television screen (thanks to her stints in shows like Maging Sino Ka Man and Lobo).

The whole cast of Golden Child performs competently, which makes the production easier to watch especially for people who may find the intricacies of the details of Chinese life too tedious. The whole play fits to together perfectly, thanks to the direction of Arcenas. Golden Child employs only a few people but it captures the mood of a busy Chinese residence.

In an interview with PEP (Philippine Entertainment Portal) during the gala night, Hwang reveals that he was born and raised in Los Angeles but he has Chinoy roots. "[The play] is based on stories that my [maternal] grandmother told me about our family history. She told me these stories in Cebu. This is my third time in the Philippines but I haven't been here since I was ten years old."


Continue reading below ↓
The play may be a semi-biographical story of Hwang's Chinese relatives yet the themes of change and culture transcend the boundaries of race. The keen viewer will see that while Golden Child shows so much details about Chinese culture on the outside—their practice on worship, their beliefs on family—it also speaks volumes about Filipino culture.


Pinoy culture, after all, is an amalgam of traditions from various races. The conflict of Siu Yong might as well be the conflict of the people who want to preserve the country's culture, while the scheming of Luan is similar to what people do these days to cope with foreign influence in the country.


Presented by the CCP and Tanghalang Pilipino, Golden Child runs at the Tanghalang Aurelio Tolentino (CCP Little Theater) until August 31 with 8:00 p.m. performances on Fridays and Saturdays and 3:00 p.m. matinees on Saturdays and Sundays. Tickets are P600 with discounts for students, senior citizens and block sales. For tickets and sponsorships, please call Tanghalang Pilipino at 832-3661, or CCP Box Office at 832-3704 and Ticketworld at 891-9999.
Read Next
Read More Stories About
review, Tanghalang Pilipino, Irma Adlawan, Theater
Post a Comment
Featured
Latest Stories
Trending in Summit Media Network