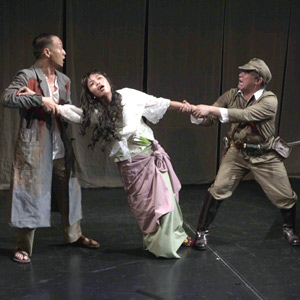 The Philippine Educational Theater Association, Black Tent Theater of Japan, and Nottle Theater of Korea give an Asian interpretation of Giacomo Puccini's opera titled TOSCA. Watch the performances to be shown at the PETA-Theater Center on August 29 and 30, with shows at 2:30 pm and 7:30 pm.


In collaboration with Black Tent Theater of Japan (BTT) and Nottle Theater of Korea (NT), the Philippine Educational Theater Association is staging an adaptation of Giacomo Puccini's TOSCA.

Directed by Soxie Topacio of PETA and Kiritani Natsuko of BTT, this adaptation focuses on the issues of war, gender, art, politics, life, and death while exhibiting elements that are true to the Asian culture, history and heritage.

SYNOPSIS. Tosca is an opera in three acts by Giacomo Puccini based on Victorien Sardou's drama, La Tosca. Considered as one of the most dramatic of operas and a staple of the standard operatic repertoire, Tosca appears as one of the most-performed operas in North America as a strong dramatic work that combines lush melodies and a gripping plot with the color, pageantry and power of the nineteenth century Roman Catholic church.

This year, the Philippine Educational Theater Association together with Black Tent Theater of Japan and Nottle Theater of Korea will be creating an Asian Tosca. Reworked to firmly place the Victorian drama into an adapted Asian narrative, this version of Tosca exhibits elements that are true to the Asian culture, history and heritage.

Narrating visions of passion, jealousy, betrayal and revenge and reconfiguring today's situation with the proposal to the future, Asian Tosca aims to exceed the limit of a usual one-off project while touching issues about art, politics, life, death, war and gender.