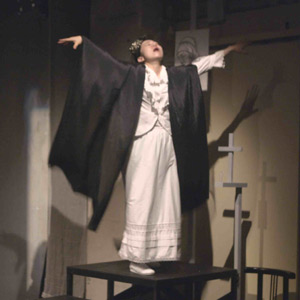 In the Asian version of the Italian opera TOSCA, Floria Tosca is a woman being forced to reveal the whereabouts of a member of the Hukbalahap, the anti-Japanese resistance group in World War I.

Puccini's opera is based on a drama by Victorien Sarou and tells the tale of the jealous Floria Tosca and her boyfriend Mario during Napoleon's invasion of Rome. The Chief of Police Scarpia uses Tosca to gain information on the whereabouts of the escaped political prisoner Angelotti, whom Mario has helped.

This production, however, transplants the action to Asia. A collaboration with the Black Tent Theater (BTT) of Japan and the Nottle Theater of Korea, the Manila run of Asian Tosca is the current incarnation of a series of revisions and adaptations that have been made by the different theater groups involved.

The first "installment" of this multi-group touring production was created in 2006 by Nottle Theater and BTT. Last year, PETA and the Practice Theater of Singapore joined forces with BTT to further adapt the storyline, infusing their own understanding of each other's cultures and histories.

The attempt at creating a version of Tosca with an Asian perspective and staged in an experimental way was an exciting and creative experience for the audience. There is a mixed cast of Filipino, Korean and Japanese actors and the exposition of Tosca's main plot is told, more or less, in Nihongo, Korean, Tagalog, and English with snippets of arias from the Italian opera.

To add to the unusual and unique flavor, the show begins with five Toscas (four Japanese and one Filipina). Later on, there are two Marios and two Scarpias. Actors interchange with each other from scene to scene, shifting from Japanese to Filipino and from young to old versions of the same character.

It is interesting that directors Soxie Topacio and Kirtani Natsuko decided not to use any supertitles (the theater equivalent of subtitles, where text is projected above the stage) for the first few scenes. This may have been a deliberate decision to further immerse the audience in the confusion that Tosca experiences.

The first half features mostly a Noh re-imagining of the story, where the "ghosts" of the different Toscas seem trapped in an endless curse to continually live through the events that lead to Scarpia's murder, Mario's execution and Tosca's suicide. In a nod to the Filipino's love of a good punchline, the second half upends the serious tone and flips it around to slapstick comedy.

Featuring Nor Domingo as Mario and Bernah Bernardo as Tosca, both are now ghosts in a netherworld where they realize what has happened to them. Angelotti is now a member of the Hukbalahap, the anti-Japanese resistance group in World War II and Scarpia (played by Raffy Tejada) is an officer of the Japanese army.

Corny one-liners lead to a Benny Hill-type chase scene when the ghost of Scarpia finds them and the three of them start blaming Angelotti (played by Willy Casero) for their deaths. While funny and entertaining, the scene's point does not really lead to anything until Tosca addresses the audience with the other four Toscas with a final message.

One of the more striking components of the production is its use of the recurring theme of a running Tosca. Sometimes shown as a moving neon laser light display (calling to mind the works of Toshimitsu Takagi) and sometimes as actors running in "slow motion," this provides a crafty way to weave a common thread through the multilingual, multicultural, multidimensional and multireality sequence of events and serves as the anchor for the show's poignant ending. It is this constant running that Tosca points out as her higher calling: to do so for those who are unable.

PETA will stage the children's plays Mga Kuwento ni Lola Basyang and Batang Rizal from September 19 to October 12, Fridays to Sundays at the PETA Theater Center in Quezon City. For details, call 410-0821 or 725-6244 or email petampro@yahoo.com.