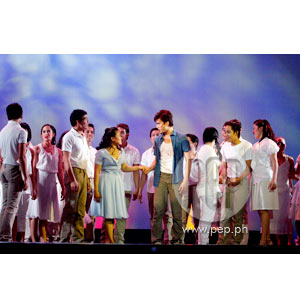 This is one of the best scenes in the play: Maria's dream sequence. Joanna Ampil (Maria, in blue) and Christian Bautista (Tony, in blue polo) sing "Somewhere" with the cast members. STAGES' local production of West Side Story's is proof that the Philippines has so many talented performers.

I caught the West Side fever!

Last Tuesday, September 2, I was privileged to watch the preview of West Side Story, and since then, I have been humming and singing "Somewhere" and "Something's Coming."

I saw the 1961 movie version and fell in love with it. The costumes, the choreography, the rendition of the songs, the camera work—I just have one word for them: perfect!

So when I finally found the musical's famous characters—Maria, Tony, Riff, Bernardo, Anita, and Chino—standing a few meters away from where I was seated, I was filled with excitement. And halfway through the prologue, I felt like I was transported to their world.

THE STORY. The plot of West Side Story is based on William Shakespeare's Romeo and Juliet. It is about two star-crossed lovers, named Maria (Joanna Ampil) and Tony (Christian Bautista), who are caught in the middle of hostility between two gangs, the Jets and the Sharks.

The Sharks, headed by Maria's brother Bernardo (Jake Macapagal), are composed of Puerto Rican teens; while the Jets, led by Riff (Gian Magdangal), is an all-American group.

The varying ethnic and cultural backgrounds will put zest and so much color into the plot, and at the same time, wreak havoc in the lives of the characters. Love and death will serve as the catalysts for change.

THE CHARACTERS. Casting is simply super.The group's overall impact has that oomph. They are successful in capturing the drama, in giving most scenes a tang, and in bringing the verve onstage and to the audience.

The characters with notable performances:

1. Rowena Villar, who plays Anita, is a revelation. The power and spunk in her voice, the fluidity and precision in her dance movements, not to mention her vivid facial expressions, earn the thumbs up of the audience.

Her best scene: Her interpretation of "America" with the Shark girls.

2. Gian Magdangal, who plays Riff, is also good. His expressions and gestures are so elaborate that even from afar, a viewer can see the twitching of his facial muscles.

His best scene: His performance of "Officer Krupke" at the Doc's General Store.

3. Jake Macapagal, who plays Bernardo, is a superb dancer. He is not as tall as Gian but he is effective in assimilating that leader aura for his character.

His best scene: His performance of "Tonight" with Anita.

4. Christian Bautista's portrayal of Tony is very soulful. There is so much feeling in every line and every move. The clarity of his voice is highly commendable, and I like his treatment of crescendo (loud) and decrescendo (soft). There are one or two instances when he seems to be out of tempo, but those very minor hitches are not detrimental at all to his overall performance.

His best scene: "One Hand, One Heart" with Maria at the dress shop.

5. Joanna Ampil's performance of Maria is effortless. She's a natural on stage. Her accent is very good, and even her speaking voice is like music to my ears. When it comes to her singing performance, she's a pro. Her velvety voice is very apt for the sweet character of Maria. She hits the notes right, and even sustains them. Though one very trivial thing I noticed, the depth of her vibrato (defined by freedictionary.com as tremulous or pulsating effect produced in an instrumental or vocal tone by minute and rapid variations in pitch) sometimes affects the last notes.

Her best scenes: Her rendition of "Tonight" with Tony and "I Have A Love" with Anita.

The rest of the gang delivers an outstanding performance, especially in giving justice to the electrifying choreography, the fight stunts, and the even the "rape" scene. I actually want to ask STAGES, "Where and how did you find these people who can act, sing, and dance?"

PRODUCTION VALUES. One thing that left me in awe were the larger-than-life sets, backdrops, and props. The scene calls for a veranda and pronto, there is a veranda. The moment requires a bedroom, and in a few seconds, it appears. And the amazing thing is, the production manages to achieve that smooth transition from one scene to the next.

I also love the execution of Maria's dream sequence, where she and Tony sing "Somewhere"—the light animation and projection are incredible.

The costumes are also fabulous and well-designed: 1) They clearly differentiate the Jets from the Sharks. 2) They help in conveying each character's personality.

If I were to describe the musical in a few words, let me sing a line from Tony's song titled "Maria": "The most beautiful sound I ever heard...I'll never forget."

That's why I caught the West Side fever.