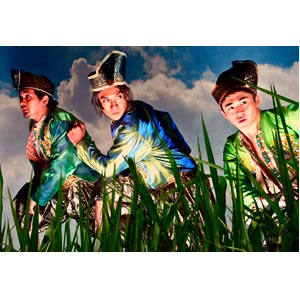 
The Ibong Adarna, according to Filipino folklore, has a very melodious singing voice and it sings seven magical songs. Every time that the Adarna finishes her song, the colors of its feathers change into a more beautiful shade, more colorful, and shinier, and her songs has the power to lull anyone to sleep, its droppings could turn anyone into stone and cure any type of afflictions.

In the Kingdom of Berbania, the king becomes mysteriously ill and only the voice of the bird can cure him, as foretold by a healer. Thus, the three sons, Don Pedro, Don Diego and Don Juan, successively start on a quest to capture the bird, to save their father from imminent death.

It now features the rich, colorful pageantry of the Maranao culture as its enchanting setting with glittering costumes, fabulous scenery, spirited performers, and fantastic choreography.

It also serves as a tribute to the late National Artist for Dance Ramon Obusan as the dances of the cultural communities of Mindanao researched and propagated by Mr. Obusan are used in the production to highlight the adventures and triumphs of Don Juan.