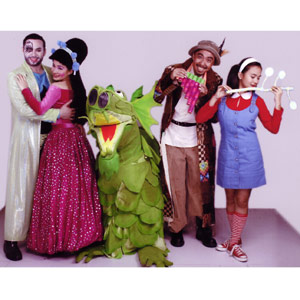 The Magic Flute will follow the adventures of (L-R) Jack Salud as Tamino, Fame Flores as Pamina, Bodjie "Kuya Bodjie" Pascua as Papageno, and Lara Maigue as Ana. Catch this fantasy opera at the CCP from September 19-27, 2008.


The Philippine Opera Company (POC) will open its second season with a fantasy production that will take audiences to a magical place where there are animated characters and even a talking dragon.

The Magic Flute is a fantasy masterpiece that combines animation, black theater, and puppetry performed by live artists. Wolfgang Amadeus Mozart's opera has been modified with the addition of a character called Ana, a little girl who is able to enter the magical world of Prince Tamino through a magic flute.


This mysterious musical instrument opens the door and carries her into a magical world. As she suddenly realizes that she has entered a different realm of reality, Ana finds herself entangled in the lives of various supernatural beings from a higher kingdom.

With the powers of the magic flute in her possession, she encounters and victoriously conquers all sorts of tests and trials as she meets Prince Tamino, Princess Pamina, the bird man Papageno, a talking dragon, the High Priest Sarastro, and the Queen of the night. A magical adventure filled with exciting music, spectacular dances, amusingly strange characters, and valuable lessons to learn makes The Magic Flute a must-see for the young and young at heart.

Be prepared to see Bodjie "Kuya Bodjie" Pascua of Batibot fame sing opera since he is cast as Papageno. Jack Salud will play the role of Tamino, Fame Flores will be Pamina, and Lara Maigue will be the flute-bearing Ana.

This kid-oriented opera will open on September 19-27 at the CCP Little Theater and will be directed by Kokoy Jimenez, the man behind the longest-running children's educational television program, Batibot.


For the past nine years, the POC has been mounting operas for local viewers. It is now the home of seasoned and promising opera singers in the country. This year marks the group's first decade of delivering world-class entertainment to Filipinos.


For tickets, block sales, and sponsorship inquiries, please contact the Philippine Opera Company at 892-8786 or Ticket World at 891-9999.