Gian Magdangal plays a gang leader in "West Side Story" 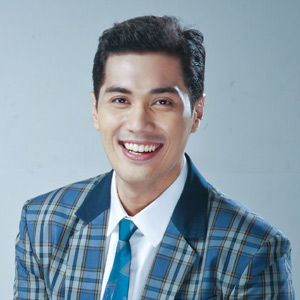 Gian Magdangal says that he almost turned down the role of Riff in West Side Story. "Muntik na akong mag-back out. Sabi ko, parang hindi ko kaya. Tito Audie [Gemora, executive producer] was just one of the people who really convinced me." Win tickets to the October 5 show of West Side Story.


After a three-year break from theater, Gian Magdangal returns to the stage in STAGES' production of West Side Story. His towering height of six feet gives him a commanding presence on stage and an advantage for his rough and tough role as leader of the American gang, Jets. Even though the role of Riff is far from his real-life self, he is very determined to do the role. "I'm soft-spoken and a bit laid-back while Riff is totally the opposite," Gian shares. "But with the help of director Menchu Lauchengco-Yulo and co-star Jaime del Mundo (playing Doc), they helped me create the character of Riff."

Playing Riff is actually one of Gian's dream roles but he didn't expect it to come early in his career. At first, he was even hesitant to accept the role, but with the encouragement from executive producer Audie Gemora, he agreed to take on this very challenging role.

In a previous interview with PEP (Philippine Entertainment Portal), Gian pointed out the West Side Story is one of the most difficult plays that a musical theater actor could ever do. This is how he describes his character: "Riff is the leader of the Jets, which Tony is part of. He's very confident, he's slick, he's smooth, he's cool all the time. Siya yung laging pinakamabilis na mag-isip sa kanila. He's also a best friend to Tony."

Gian says that he almost turned down the role of Riff in West Side Story. "Muntik na akong mag-back out. Sabi ko, parang hindi ko kaya. Tito Audie [Gemora] was just one of the people who really convinced me. Watching the movie, reading the script, and watching the dance steps, sabi ko, ‘Parang hindi ko kaya. Napasubo ‘ata ako dito.' Mahirap siya, hindi biro talaga. I wanted to do Tony also but I'm now an understudy of Christian [Bautista]. This is also very hard since Tony should be a good singer, he should be in love with two women, he should be passionate."

But when he finally decided to accept the challenging role of Riff, the singer-TV host made every effort to play his part well.

"I studied the character very well," he explains. "I made a character sketch to flesh out Riff very well. I took note of his likes, dislikes, pet peeves, and many more. I also asked myself, ‘who is Riff in my life?' I pegged some of my friends together to form the Riff in me. I even thought of my idols like Robin Padilla and imagined him a New Yorker, and it was effective." But more than the songs and what the role of Riff demands, Gian finds his entrances and exits a bit difficult to study because it requires timing and coordination with other cast members especially for most of the dance sequences.

Even though this is Gian's most challenging role thus far, his ultimate dream is to play the part of Tony. This is not impossible from happening since he is the understudy for Christian Bautista. "In case Christian becomes suddenly unavailable to play the part, I will take over," Gian says. "So I studied the parts of Riff and Tony." Gian finds Tony to be a very emotional role, and sees himself as more of the romantic type rather than a hard-hitting guy.

Aside from working with his theater friends, Gian feels honored to work with some of the best thespians in the world. In just about two months, he has made new friends in the company of Joanna Ampil and Rowena Vilar. "They are very approachable that you wouldn't think they are big stars," Gian comments. "They are very down to earth and it's a very humbling experience for me." The cast gets to bond with each other because of their everyday rehearsals from Monday to Saturday starting at 10 a.m. to 4 p.m. "I don't know but there's just this thing about theater that attracts me to it," Gian affirms. "Even if it consumes a lot of time, it's really worth all my efforts. I know it's a sacrifice but it can only do me good."

Just like his idol Gary Valenciano, Gian started his singing career by joining the choral group Kundirana during his high school days in La Salle. This later on led him to join Trumpets Playshop under seasoned directors Freddie Santos and Sweet Plantado of The Company. Soon enough, he found himself as part of the boy band 17:28, which released two albums, and produced the hit song Sukob Na. After which, his theater involvements started pouring in. Some of his theater credits, mostly supporting roles, include Beauty and the Beast, The Little Mermaid, Man of La Mancha, Joseph the Dreamer, and Saturday Night Fever where he demonstrated his talents in disco dancing as Tony Manero. There's a reason why he was given an award for "Best Performance by a New Male Artist" in the 2006 Awit Awards, and was awarded the "Most Promising Male Singer" by the 2008 Guillermo Awards Foundation.

Gian considers singing as his passion and theater as the opportunity provider for him in fulfilling his dream. He really dreams of becoming a pop star someday, and theater is slowly paving the way for him to achieve this. In fact, after landing on the top 3 of the reality TV show Philippine Idol, he got a network contract. He is a regular in the Sunday noontime variety show SOP (Sobrang Okay, Pare!). Someday, he also hopes to do some acting work on television like being part of a soap opera.

Indeed, Gian never stops dreaming, and has a long and promising path ahead of him. After his West Side Story stint, Gian will continue working on his debut album under Sony-BMG. Despite his busy schedule, he still manages to be a full-time dad to his 3-month-old son Gian Haley.


Continue reading below ↓
PEP is a media partner of STAGES for West Side Story. This play is presented through special arrangement with Music Theatre International (MTI) in New York.

PEP PROMO. A lucky PEPster can win two tickets to the October 5 show of West Side Story, which is being staged at Meralco Theater in Pasig City. Consolation prizes are also in store for six other PEPsters.

Click this link to answer the question and join the electronic raffle.