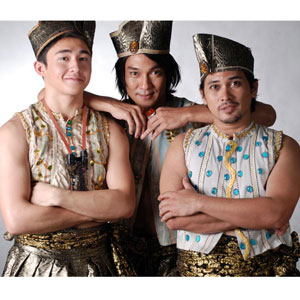 
Ever since he was a little boy, Arron Villaflor wanted to become an actor so when the opportunity came to realize his childhood dream, he grabbed it immediately by joining the talent reality show Star Circle Quest Season 2.

Luckily, Arron landed as first runner up in the contest and became a full-pledged ABS-CBN Kapamilya. It has been four years since his Star Questor days and so far, he has appeared in several teen-dramas, a stint in an afternoon musical variety show, and a handful of movies. He feels terrific knowing that he gets his biggest kick on a daily basis, which is to be with his idols.

"Ever since I was ten, gusto ko na maging artista," says Arron. "My idols are Robin Padilla, Piolo Pascual, and Jericho Rosales. Akala ko madali lang because they made it appear as if it is very easy when I watched them in their TV shows and movies yun pala mahirap. There are so many challenges there are even intrigues. Despite that, nakaka-amaze din lalo na pag nakita mo yung mga idols mo, they talk to me and I get the chance to work with them, and somehow, it feels good to know that you are realizing your dreams, and that are coming true."

Arron takes a bigger challenge in his life as he tries acting for theater this September. He is cast as Don Juan in Gantimpala Theater's production of Ibong Adarna.

"Nandoon po ang kaba, kasi first time ko talaga! Naisip ko na, wow, theater yan, and I know that madami ang manonood," begins Arron. "At first, I was afraid because I might not be able to deliver what they expect. Kasi yung mga kasama kong actors, they are all professionals and wow, I was a nervous wreck during my first rehearsals with them."

He continues sharing his pleasant experience working with Gantimpala Theater, "I am so happy kasi because they are the ones pa na lumalapit sa akin and they ask me if I am okay, if I need to help with lines, or how do I deliver it with more clarity, and how do I catch up with the choreography. I have been rehearsing with them for some time and nag-e-enjoy because every one treats me well and for a first timer, nakakatuwang isipin na they are so willing to share their expertise."

His role is Don Juan, the youngest son of Haring Fernando, who because of his pure heart and good intention catches the illusive magical bird whose voice serves as the cure to his ailing father.

"Don Juan is the pinakamabait sa magkakapatid. He is very patient, understanding and loving, I even think he is some kind of a mama's boy. What he wants is for his father to be cured, that is all that he cares about. Being proclaimed as the next king is the least of his worries. He has a good soul, with a child like innocence, and his faith and is inherent goodness are his greatest strengths," answers Arron when asked to describe his character Don Juan.

Another aspect of the play that Arron finds most amusing and challenging are the dances that are part of the play. These are dances came from the cultural communities of Mindanao, researched and propagated by the late National Artist for Dance Ramon Obusan. Gantimpala Theater incorporated the dances to serve as a tribute to the artistic legacy of Mr. Obusan.

"Halo-halo yung mga sayaw, talagang folk dance siya. It is very different from the things I do in ASAP. Siempre noong una mahirap pero sabi ko sa sarili ko sige kaya ko ito," shares Arron. "I hope to remember every thing because there are some scenes in the play wherein I need to recite lines and execute the dance at the same time. Magawa ko sana."

What has he learned so far now that he is Don Juan? "It made me realize that doing theater is a lot of hard work and it requires a lot of discipline. Aside from acquiring new dancing skills, it has helped me pag dating sa mga lines, my-co-actors taught me about clarity, kung paano magbato ng boses, by using my diaphragm, they even gave me exercises on how to use it and it feels good na tama ang bato ko ng linya, mas buo siya. It taught me about professionalism kasi the rehearsals start on time, every one is ready, memorized ang lines, the cast members know their blockings. Just by observing them, ang dami kong matutuhan. I also like the fact that the atmosphere in Gantimpala Theater is very family like, they accepted me with open arms."

"I hope that the people who will watch Ibong Adarna will enjoy the play. Mahirap pero masaya siyang gawin and especially to the students, they will learn many lessons here. I guarantee them a magical experience they will not forget," concludes Aaron Villaflor, the new Don Juan.