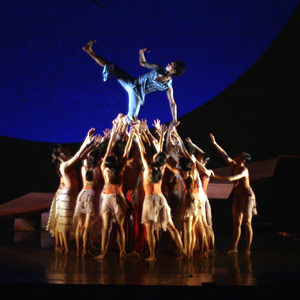 Ballet Philippines' La Revolucion Filipina retells the stories of Apolinario Mabini, Emilio Aguinaldo, and Andres Bonifacio through dance. This performance was shown to the public earlier this month.


What is most interesting in Ballet Philippines' staging of La Revolucion Filipina is choreographer Agnes Locsin's entrancing dance vocabulary. Audiences used to classical ballet will not find the usual poses and movements in this showcase of earthy and visceral emotion and strength.

Instead of the usual arms and legs extended to create a "longer line," Locsin has her dancers in bent, crooked and contorted choreography and it looks different, yet wonderful. She imbues her dancers with a unique grace and texture. Some theater fans may remember shades of this kind of choreography from Trumpet's The Lion, The Witch and the Wardrobe and SK Entertainment's Rama at Sita, two musicals that feature Locsin's choreography.

This different approach is appropriate in that La Rev traces the struggle of Filipinos such as Apolinario Mabini, Emilio Aguinaldo, and Andres Bonifacio against foreign invasion set to the haunting music of Ryan Cayabyab. In a way, Locsin's reworking of Western dance techniques into neo-ethnic movement already tells much of the story, because even in the form that she uses, there is already an unspoken revolt against established "foreign" dance norms.

In the performance we caught, Mabini was performed by Biag Gaongen. He gives a strong performance, a study in quiet, interior power portrayed through intense and elegant dancing.

One striking image that Locsin creates is that of a male dancer (The Oppressor) holding up a female dancer (representing enslaved Filipinos) in a fetal pose, legs askew and arms outstretched in supplication. Using Dennis Marasigan's libretto, this is a sad but powerful image Locsin repeats towards the end of the two-hour narrative, when Mabini "witnesses the treachery of his fellowmen and the cruelty they inflict on their fellow Filipinos." In a way, perhaps it is her warning to audience members that they should keep in mind not to let that image happen again.

Set designer Mio Infante uses visual metaphors to reflect violation and intrusion. He places a skewed, off-kilter ramp upstage, like a jagged, meddlesome finger pointing menacingly into the otherwise pristine stage. A large half circle, meanwhile, serves as the backdrop with a neon-orange triangle piercing into it.

Katsch Catoy's lively lighting design is able to create completely different looks for the stage, sometimes bathing it full of light and sometimes casting ominous shadows to full effect. One very small quibble though, in one crucial sequence featuring the Philippine flag, his yellow lighting was so strong (or perhaps the fabric was so faded?) that the red and blue stripes on the flag became a strange hue of orange and green.

Nonetheless, La Rev is a poignant piece that helps retell our history as a people and as a nation. It bears retelling, again and again, lest we forget.