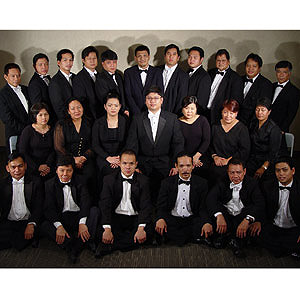 Gerard Salonga (center, wearing glasses) admits that he is a great fan of the conductor-composer Leonard Bernstein, the man behind the musical West Side Story. Get a chance to win tickets to the October 5 show by joining PEP's online promo.


In the ongoing West Side Story (WSS) at the Meralco Theater, it's a known fact that staging a musical as big as this would need a world-class musical director to carry out the classic music of Leonard Bernstein. Berklee College of Music award-winning alumni Gerard Salonga fits rightfully in the production, which has been earning rave reviews in the past weeks.

"Bernstein is more famous as a conductor than a composer. I've known his works even before I went to Berklee. Among musical theater lovers, he's been known for West Side Story, Candide, On The Town," says Gerard, whose childhood was spent listening to the music of the great conductor-composer.

Looking back, he said it's as if he was being prepared for WSS. "I would not have been able to do this 10 years ago. Di ko makakayanan yung stress."

He shares two of his former teachers in conducting are former students of Bernstein. "They are David Callaghan and George Monseur, both are conducting students of Bernstein in Tanglewood Music Center. It's an annual summer music workshop that is held by the Boston Symphony Orchestra in Berkshire, Massachusetts. Bernstein was a student there before he became teacher."

Gerard says it's been his long-time dream to do a work by Bernstein. He never imagined it would be as big as WSS. The first Bernstein piece he conducted was "Symphonic Dances" from WSS, sometime in 2003. It's a concert piece arranged by Bernstein for a symphony orchestra.

Five years later, when the opportunity came to do WSS, he grabbed it at once. Gerard said he learned that STAGES was about to do WSS from one of the production people he worked with in sister Lea's solo concert, My Life Onstage, in which he served as musical director.

He adds Bernstein's influence on him is undeniable.

"...By virtue of his exuberance, even in the classical repertoire, he's famous for his podium acrobatics. Purists aren't entirely happy with it and his tendency to take liberties with classical music. Many say his interpretation of Beethoven was too slow while his Mozart was too fast. But for Bernstein, that was the fusion of the composer's intent and the performers' understanding of the composer."

He adds it's the excitement that Bernstein brought to his music making that thrilled him a lot. "He was a lover of music of every kind. You can see that in WSS as well as in his serious compositions."

Conducting the 30-piece FILharmoniKA, Gerard enjoys the nearly three-hour musical. He said it doesn't tire him a bit. There are breaks but what matters is he enjoys doing the whole show.

Like the orchestra, he describes the cast as fabulous. "I'm very surprised of the number of talented young people we now have in musical theater. It's Menchu's [Lauchengco- Yulo] first time to direct. I've known her for a long time so it's good for me to be part of this very important project for her."

As for the musical itself, Gerard is unstoppable expounding on the experience.

"All songs in WSS are great. The rumble, mambo, even the prologue is cool. Walang itatapon. 'Somewhere' is so beautiful. Minimally-written. Hindi sobra. Walang labis walang kulang."

And with that excitement, he wishes to share to all members of the audience every time he raises that baton as Tony and Maria defies all odds in this immortal love story that everyone should experience.


PEP PROMO. Get a chance to win tickets to the October 5 show by joining PEP's online promo. Promo ends on October 1, 2008. The lucky winner will be notified when he/she can pick up the 2 tickets to West Side Story at the Summitmedia office at the 7th floor, Cybergate 3 Robinsons Pioneer complex, Pioneer St., Mandaluyong City. (Click HERE to join the promo).